Is this the way to tackle income inequality?

When it comes to compensation, the company you work for often matters more than how good you are at what you do. In 2013, the average employee of Goldman Sachs, the investment bank, earned $383,000 – much higher than what the best-performing employee in most firms can hope to take home.

Pay differences across companies are considerable. Research by Jason Furman, US President Barack Obama’s top economic adviser, and Peter Orszag, Obama’s former budget director, has found that rising pay differentials are the prime cause of widening US wage inequality in recent decades. They account for a larger part of the rise in overall income inequality than wage differences within companies or capital income.

At the other end of the spectrum, many labor-force participants are on temporary contracts, work for small firms, or are self-employed. Some combine different jobs at the same time. If, as expected by many, the so-called sharing economy develops, their number is bound to grow. These workers do not benefit from job security and generally earn much less. 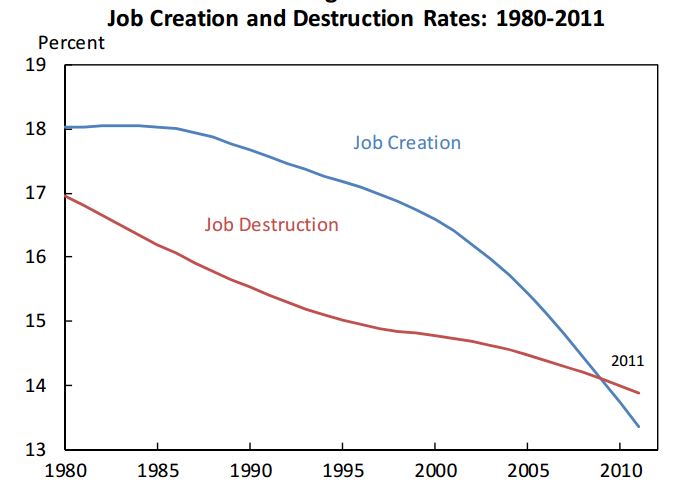 Job Creation and Destruction Rates: 1980‐2011, from A Firm-Level Perspective on the Role of Rents in the Rise in Inequality by Jason Furman and Peter Orszag, 2015

Emerging countries offer the example of blatant inequality between employees in the formal sector – companies like Petrobras in Brazil and Infosys in India – and those who work in the informal economy. But even in advanced economies, where social protection is broad in scope, access to benefits is far from equal. Employees of large, profitable firms tend to enjoy better health-care coverage, more generous pensions, and easier access to training. Moreover, some benefits – for example, parental leave – are conditional on seniority within a company.

These are disturbing facts. Talent and effort should be rewarded, but two people of equal capabilities and dedication should not be treated differently just because one happens to be an insider, with a secure job in a big, successful company.

Such differences are questionable not only in terms of fairness; they are also economically inefficient, because they tend to limit labor mobility across firms and sectors. Employees may think twice before leaving a company if they are set to lose valuable perks as a consequence. This prevents potentially positive matching of the skills needed by employers and the available supply of them. It also makes hiring first-class talent excessively difficult for small companies.

Public policy should not prevent successful companies from paying more and offering better working conditions. But it should ensure that all participants in the labor force, whatever their status, enjoy equal access to essential benefits; and it should aim at minimizing the losses that impede mobility across firms, sectors, and types of employment.

Obama’s health-care reform was an important step in this regard. But social-welfare reforms should go much further. For fairness as well as for efficiency reasons, rights and benefits should be attached to individuals, not to companies or employment status, and should be fully portable across sectors and jobs.

To attune its social-welfare system to a changing economy and reduce inequality among individuals, France is currently considering a system of so-called Individual Activity Accounts (IAAs). My colleague Selma Mahfouz chaired a committee that prepared a blueprint for such a system.

Put simply, every new labor-force entrant would be equipped with a lifelong individual account, thereby accumulating points in the same way airline travelers accumulate miles. They would earn them by working in both the private and public sector. Physically strenuous jobs would yield more points than office jobs. Pro bono community service would also generate points – perhaps more than paid jobs.

Points earned could be spent on lifelong education and professional training, which would thus become independent from employment status. Every person could decide to draw on her IAA to prepare for, or when making, a job change.

Other financing could also be mobilized toward the same end. For example, an employee could decide to shorten the duration of his unemployment benefits and invest the corresponding points to benefit from better education opportunities.

But financing education should not be the only purpose. Points could also be used to help finance volunteerism or care for elderly family members. Points earned through hard toil could be spent on retiring earlier. Many more examples of partial fungibility could be imagined.

Such a system would have three additional benefits. First, it would help improve access to information. Employees nowadays are often lost in the complexity of the various social benefits to which they are entitled. The creation of IAAs and the adoption of a single unit of account would go a long way toward making things simpler, especially if all relevant individual information is available to users via a single smartphone app.

Second, IAAs would empower employees, especially the least skilled, who often perceive themselves as being in a state of subjection. Together with information, the possibility to invest their social benefits, rather than only consuming them, would strengthen their autonomy and freedom of choice.

Finally, the same accounts could serve as vehicles for public policy. For example, early school-leavers could be endowed with points for later use in professional training. More broadly, instead of assisting people only when social risks materialize, public policy could support individuals throughout their working life, by adopting a more effective bespoke approach that fits peoples’ needs better than coarsely tailored schemes.

This may sound utopian; in a way, it is. But at a time when every digital service becomes more and more personalized, why should social policy remain confined to the philosophy and solutions of the twentieth century?

Author: Jean Pisani-Ferry is a professor at the Hertie School of Governance in Berlin, and currently serves as Commissioner-General for Policy Planning for the French government.