Which cities are adopting smart technology?

This article is published in collaboration with GE Lookahead.

Using an environmental dashboard, citizens of Oberlin, Ohio, can track in real time the city’s electricity and water use as well as their own. The project’s designers want to show how technology can help monitor and manage urban resources. What the dashboard also demonstrates is that, as cities adopt everything from smart meters to web-enabled sensors, technology will demand a more decentralised approach to urban resource management.

Cities are big resource consumers. Occupying just 3% of the world’s surface, they consume some 75% of its resources, according to the United Nations Environment Programme. They also generate 50% to 80% of the world’s greenhouse gas emissions and half of global waste.

Keen to reduce this footprint while cutting costs and managing the demands of rapidly expanding populations, cities are exploring how innovative, smart infrastructure could transform resource productivity.

Reducing energy consumption is one priority. There, technology offers a suite of powerful management tools, with smart technology at their heart. Working with Entergy, for example, the city of New Orleans has developed “SmartView”, an advanced metering infrastructure project aimed at optimising energy demand. The pilot programme has helped some 4,700 low‐income consumers improve their energy management and reduce their bills through rebates for reduced consumption during peak periods.

Meanwhile, as part of Future City Glasgow—a $37.4m (£24m) technology initiative designed to show how technology might make cities smarter, safer and more sustainable—the Scottish city is looking at how it might turn derelict or vacant sites owned by the city council into mini solar farms that could feed energy into the grid. Sites being examined include the city’s former meat market, sites where sale by the council has been stalled by economic downturn and brownfield sites too expensive for redevelopment but with potential for solar installations. 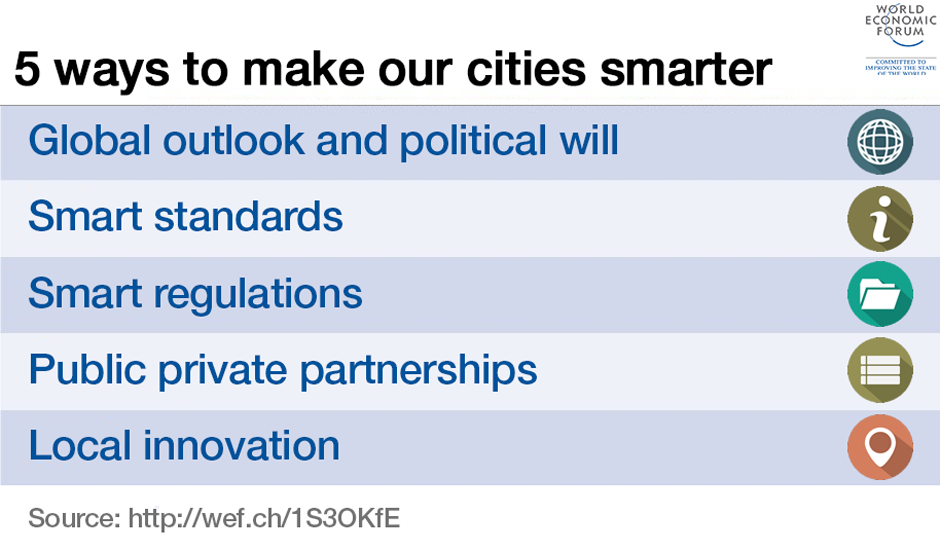 The gains from technology deployment will go well beyond the energy sector. For the Indian city of Thiruvananthapuram, Kerala, sensors and intelligent meters are helping authorities distribute water more equitably and keep track of spikes in use, whether from leaks or illegal water use. The hope is to make a substantial reduction in water losses—currently about 45% of the supply—while improving revenue collection by more than 10%.

Upgrading of infrastructure for the digital age is no easy task. And the obstacles cities face should not be underestimated. Not only is it counterproductive to install technologies such as smart meters before ageing infrastructure—such as outdated substations—has been modernised, it is hard to turn off the power while upgrades are being installed.

In addition, municipal authorities may have only a limited direct influence over infrastructure. While about 75% of mayors have control over residential waste collection and city transit systems, for example, only 50-60% manage water supply and waste treatment and just 15% control city power supplies, according to McKinsey.

Cities, therefore, also need to encourage resource conservation through partnerships with the private sector or use of policy tools. Buildings, which generate about 40% of the world’s carbon emissions, are a case in point. While city authorities can use smart technology to manage consumption in public buildings, policy levers such as building codes or audit requirements are also needed to prompt investments by commercial or residential owners in the technologies that support efficient, green buildings.

Since 2010, for example, all New York City buildings of more than 50,000 sq ft have been required to enter their energy use—along with water consumption and other building information—into an online benchmarking system. In September 2014, Bill de Blasio, the city’s mayor, announced a plan that brought the threshold down to 25,000 sq ft, adding an additional 16,000 buildings under regulation.

Such regulations benefit both the city, which can encourage practices that lower the city’s environmental footprint, and developers and owners, who can charge rent premiums for green buildings that offer lower utility bills and can attract corporate tenants wanting to demonstrate their commitment to sustainability.

Technology may even allow cities to promote efficient resource consumption by changing the way its residents access services. Gartner, a technology research company, foresees a time when “citizens could hedge or auction through eBay, or other trading platforms, their energy and resource consumption or carbon emissions”.

Already, urban residents are playing a bigger role in resource management, partly by adopting more efficient lifestyles but also by contributing to the pool of environmental data city authorities can access. Take the Copenhagen Wheel, an e-bike add-on developed by the Massachusetts Institute of Technology’s Senseable City Lab; this device helps cyclists capture and store the energy they generate. While cycling, the wheel also captures real-time data such as local pollutant concentrations and traffic information that can, in turn, be fed into a citywide database—helping the city optimise traffic flows and minimise associated pollution.

Meanwhile, Tel Aviv has combined its citywide free wi-fi with an app that connects citizens digitally to its city services. The service, called Digi-Tel, not only informs citizens about cultural events, sports facilities or road closures, it also helps increase use of public transport such as bike-share schemes and provides the city with a real-time digital map of the quality of services in the city—an innovation that won it the 2014 World Smart Cities Award at the Smart City Expo and World Congress in Barcelona.

For cities, all this means a change in mindset. Traditionally, municipal authorities have taken a centralised, command-and-control approach to resource management. The advent of digitally connected citizens empowered with real-time data and able to manage their own consumption represents a shift that goes far beyond technology.

Author: Sarah Murray is a writer at GE Lookahead.

The North Atlantic jet stream could move permanently by 2060. Here's what to expect

Disruptions to the North Atlantic jet stream will have drastic weather-related consequences according to research looking at how the stream has changed.

Air quality, aviation fuel and Australia's koalas: Everything you need to know about the environment this week

Ecocide: How to protect nature and the people who are dying to save it

5 tree species that are at risk of extinction