This post first appeared on The World Bank’s Voices Blog.

Energy rationing is popularly nicknamed “dum-sor,” or “on-off” in Ghana, an expression that people use to talk about the country’s frequent power outages. This is a challenge faced by countries across the region — sub-Saharan Africa loses 2.1% of gross domestic product from blackouts alone — and across the developing world.

While the lack of a consistent electricity supply is one of Ghana’s largest economic challenges, the truth is that the country has made progress in increasing access to energy. Today, about 75% of the country is connected to the national electricity grid. This is significantly higher than the regional average: only one in three people in sub-Saharan Africa has access to electricity.

I recently traveled to Ghana on End Poverty Day to commemorate the country’s success in reducing poverty and sharing prosperity over the last two decades — poverty has been cut by more than half, from 53% of the population in 1991 to 21% in 2012. As Ghana has developed, with more workers moving from agriculture into services and industry, energy reliability has never been more important for the growth and stability of the country’s economy.

No matter how much is invested into skills training or small- and medium-sized enterprises, businesses cannot thrive without access to reliable and competitively priced modern energy.

Blue Skies — a company located 45 minutes east of Accra — delivers many tons of fresh fruit and juices to European supermarkets each year and employs about 3,000 Ghanaians — most of whom are under the age of 30.

When the power goes out — a near-daily occurrence — Blue Skies relies on expensive diesel generators to keep production going. The company has already spent the equivalent of hundreds of thousands of U.S. dollars on back-up fuel in the first nine months of 2015. This kind of reliability challenge is felt by manufacturing enterprises across the region. Firms in sub-Saharan Africa lose an estimated 4.9% of annual sales due to electricity outages.

Blue Skies has absorbed the additional costs due to the lack of a steady power supply, but for many smaller businesses the situation is even worse. 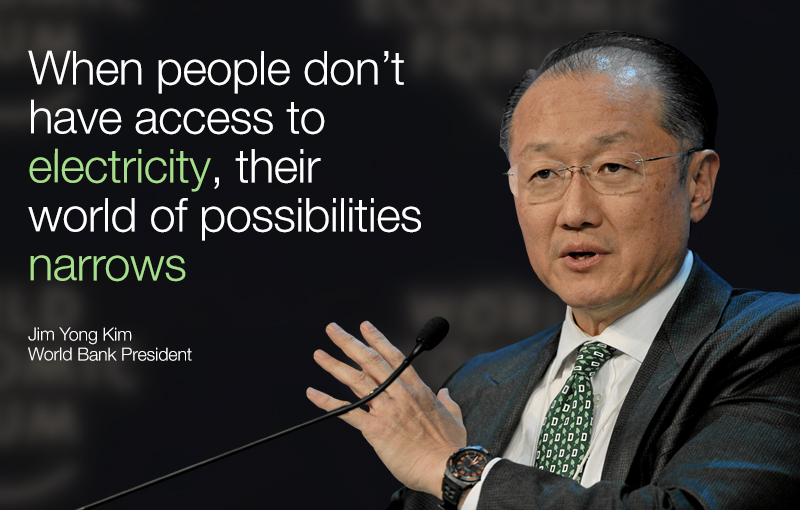 ​To help increase clean and affordable energy in Ghana, the World Bank is providing $700 million in guarantees for its Sankofa gas project. This will fuel up to 40% of Ghana’s currently installed generation capacity and replace polluting fuels with cleaner, more affordable natural gas that is produced domestically. Ghana will be able to reduce oil imports by 12 million barrels per year and carbon emissions by around 8 million tons over five years. Our private sector arm — the International Finance Corporation — has also helped increase Ghana’s electricity generation capacity with financing for an efficient new gas-fired power plant. TICO 2, which started operations this month, will account for about 15% of the country’s total electricity output.

We’re investing in transformational energy projects across the region — and the world — because reliable and affordable power supplies aid business development greatly; every $1 invested in the power supply generates more than $15 in incremental GDP. Hydropower is the world’s largest source of renewable energy, and finding responsible ways to use Africa’s vast hydroelectric potential can bring electricity to tens of millions of people who now live in the dark. Sub-Saharan Africa has 300 gigawatts of undeveloped hydro potential, which is enough to nearly quadruple its total generating capacity of 80 GW. In contrast, Western Europe uses about 85% of its available hydropower potential.

When people don’t have access to electricity, their world of possibilities narrow. When businesses don’t have access to electricity, they cannot grow. If we are going to end extreme poverty in the next 15 years, we must greatly expand access to energy for the poorest people and the poorest nations. Universal access to energy — especially clean, affordable energy — will be the only way for us to truly give an equal opportunity for nations to grow and people to reach their full potential in the years ahead.

Image: A power official works on an electric pole along a street. 2012.REUTERS/Akintunde Akinleye.

Global growth is projected to decelerate in 2022, with economic disruptions driven by the spreading of the Omicron variant, as well as supply bottlenecks.