COVID-19: What you need to know about the coronavirus pandemic on 15 June

This article is published in collaboration with Quartz Africa.

Simulation is a great way to design a product for users who don’t share the same context as you do. This is what Facebook aims to drill through to its staff by slowing down the site for one hour on Tuesdays.

Through the initiative—dubbed “2G Tuesdays”—the company hopes its staff will better understand what it’s like to access the platform via a 2G connection, a reality for many of its users living in the developing world. In Africa, Facebook has over 120 million active users, 57% of which access the platform using a feature phone with a 2G connection. 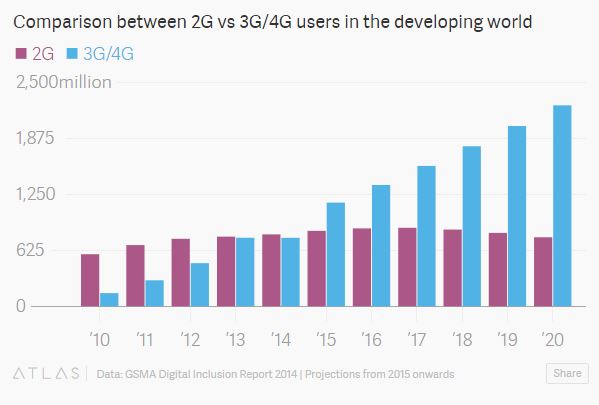 Earlier this month, the company optimized its news feed to allow users with slow connections access it quickly. Through other initiatives, like Internet.Org, Facebook Lite—a mobile app designed for 2G connections—and the company’s recent announcement that it will beam internet by satellite in Africa starting next year, it is clear that Facebook is betting on the “next billion” internet users—many of which still use 2G technology.

But all of these initiatives aren’t just philanthropic deeds. By optimizing the platform for slower connections and helping to improve access to the internet, Facebook wants to continue grow its user base rapidly in countries like India and Nigeria with the view to generating more revenue in the long term.

While Facebook is notching up billions of dollars in revenue in North America and Europe, its average revenue per user (ARPU) in the developing world lags behind, as Quartz has previously reported.

Figures from the company’s second quarter earnings for 2015 show how regions like Africa and South America (accounted for in the “rest of the world” category) generate 10 times less in average revenue per user (ARPU), than the two North American countries, US and Canada.

New forms of harm require new forms of redress. We need cohesive, systemic mechanisms that consider the rights and duties of actors in the data ecosystem.

Global internet outage: Why did so many sites go down - and what is a CDN, anyway?

What can China tell us about the future of social commerce and content?

To succeed - 'get comfortable with failure'. Wikipedia's Jimmy Wales on this week's Radio Davos