Why ‘having it all’ is a myth – for men and women

In 2012, Anne-Marie Slaughter’s Atlantic article “Why women still can’t have it all” set the internet on fire. She wrote it, she said, to dispel the myth that it was possible for women to have both a high-flying career and family responsibilities. To say women could have it all was “simply airbrushing reality”, Slaughter wrote.

Her piece resonated with many mothers struggling to juggle several priorities. But some were quick to point out that fathers felt exactly the same pressures. As men’s magazine Esquire noted: “Entirely lost in the debate is the growing strain of work-life balance on men.” While that article ignored the biological pressures – pregnancy, childbirth, breastfeeding – that weigh more heavily on women, it did raise an interesting point. 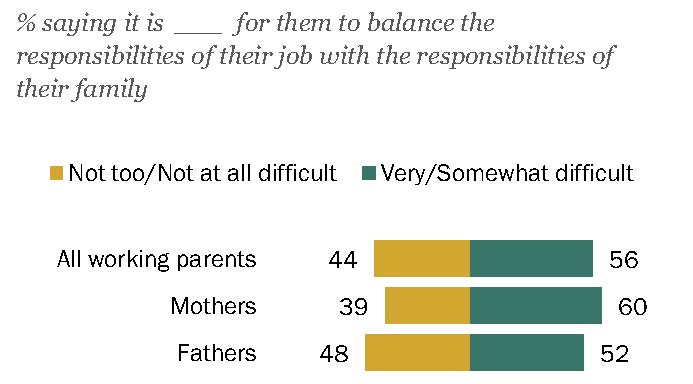 A closer look at the results shows that full-time working mothers do seem to find the balancing act more difficult than fathers: 1 in 5 women said they found it “very difficult”, compared with 12% of men.

Pew also found a significant difference in responses based on education level: 70% of mothers with a college or post-graduate degree said they found it difficult (very or somewhat), compared to 52% of those without one. The same education divide was found among men: 61% of college graduates said they found it difficult, compared to 47% of non-college graduates.

The findings suggest the problem might be less about women, and more about the type of work people are doing. It’s something Slaughter recognized in Unfinished business: women, men, work, family, a book that followed up and built on her 2012 article “Perhaps the problem is not with women; perhaps it is with work”.

Have you read?
Why valuing caregiving will help close the gender gap
I cannot and I will not give up my family time
Work stress: why women have it worse than men

4 WHO videos on coronavirus you should watch

Coping with COVID if you're blind, and other stories in our new podcast

COVID-19 and working from home: 5 ways to reduce procrastination and boost productivity

This is how many jobs are at risk in the U.S. due to the coronavirus outbreak