Why Turkey and the EU must build a genuine partnership

Turkey’s downing of a Russian warplane risks opening a new front in the violence engulfing Syria, thereby dashing the hopes for a rapprochement between Russia and the West that had arisen in the wake of the Paris massacre. With Russian President Vladimir Putin and Turkish President Recep Tayyip Erdoğan now engaged in a war of words, and given the nightmare scenario of something far worse, it is more important than ever that the European Union do all that it can to reinvigorate its ties with Turkey.

Prior to the attacks in Paris, Erdoğan had seemed to be holding all the cards in the bilateral relationship. European leaders, faced with an escalating refugee crisis, agreed last month to pursue a joint action plan, which demanded that Turkey help stem the tide of migrants into Europe, in exchange for EU funds, visa liberalization, and, most relevant, renewed negotiations on Turkey’s EU accession. Shortly after that decision, German Chancellor Angela Merkel reversed her previous opposition to Turkish membership in the EU, calling it an “open-ended issue” during a visit to Istanbul.

All of this served Erdoğan well in the run-up to Turkey’s November 1 general election. The action plan and Merkel’s visit were viewed within Turkey as de facto endorsements of Erdoğan; the EU even delayed the release of a critical “progress report” on Turkey’s accession negotiations until after the vote. In the end, Erdoğan’s Justice and Development Party (AKP) regained its comfortable parliamentary majority. 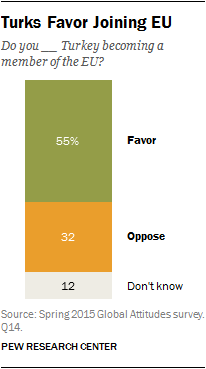 The G-20 Summit in Antalya, held on November 15-16, was to cement Erdoğan’s triumphant return to the world stage, ending a period of relative isolation by the West that reflected disapproval of his authoritarian tendencies. And a joint EU-Turkey summit was scheduled for November 29 to formalize the action plan.

Then, as so often happens, events intervened. The tragedy in Paris sidelined Turkey at its own summit, derailing Erdoğan’s international comeback. Instead, the focus was on US President Barack Obama, Putin, and French President François Hollande acting from Paris.

Now, Erdoğan faces a different strategic outlook, particularly with Russia-Turkey relations under greater strain than at any time since the Cold War’s end. With the world now more determined than ever to defeat the Islamic State – an enterprise that will, it is becoming clear, require boots on the ground – the major powers are seeking immediately available forces. For the time being, that means, on the one hand, the Syrian Democratic Forces, dominated by the Kurdish People’s Protection Units, which oppose President Bashar al-Assad’s regime, and, on the other hand, the pro-regime forces backed by Russia, as well as Iran and its proxies, particularly Hezbollah. From a Turkish perspective, both are unacceptable.

Meanwhile, Turkey faces a direct threat from the Islamic State, exemplified by the twin suicide bombings that killed more than 100 people in Ankara last month. Turkish authorities have since foiled another attack, planned for the same day as those in Paris.

Finally, following Russia’s annexation of Crimea in 2014, which drove a wedge between the Kremlin and the West, Turkey had carved out a strategically advantageous position between the two sides. But Turkey now finds itself increasingly isolated from both camps, owing to its downing of the Russian fighter and its staunch opposition to Assad, whom both American and European leaders increasingly believe will have to play some role in any political settlement.

As France shuns NATO as the centerpiece of an international response to the Islamic State, Turkey’s zero-tolerance approach to encroachments on its airspace has put NATO-Russian relations under dangerous strain. It is in easing those tensions that the EU has an important role to play.

While Turkey still has leverage vis-à-vis the EU, owing to the continued flow of refugees toward Europe, both sides are now approaching the partnership from positions of genuine need. Neither side can afford further complication of the already volatile situation. This should be reflected at the upcoming summit.

On the EU side, it is important to acknowledge Turkish sensitivities regarding Kurdish forces. This means establishing credible safeguards to prevent potential safe zones in northern Syria, essential to stemming refugee flows and beginning to stabilize the country, from threatening Turkey’s internal security. European leaders – along with the US – must weigh in to avoid an escalation between Turkey and Russia. And they must do a better job of reassuring the Turkish government that, despite Assad’s possible inclusion in Syria’s initial transition, he has no long-term future as the country’s leader.

For its part, Turkey needs to broaden its perspective. The developments on its southern border concern far more than the Kurdish question; they have far-reaching implications for regional stability. The AKP’s election victory offers a chance for the government to shift its attention back toward resolving the broader problems in its neighborhood – that is, to act like a true regional leader, instead of pursuing a narrow, self-serving agenda.

To address today’s most urgent challenges, Turkey and the EU must commit to building a genuine partnership, based on common interests, in particular security interests, rather than a transactional arrangement that addresses issues à la carte. This necessarily includes a good-faith approach to negotiations on Turkey’s accession to the EU.

In the wake of Turkey’s fraying relations with Russia, the decision to proceed with the planned EU-Turkey Summit is an important one. Now more than ever, the EU and Turkey have a responsibility to act together, before an already appalling situation gets even worse.

Author: Ana Palacio is a member of the Spanish Council of State, a visiting lecturer at Georgetown University, and a member of the World Economic Forum’s Global Agenda Council on the United States.