Will this breakthrough make wind power work for Europe?

A new type of wind farm has been approved by the Scottish government, reports Quartz.

When installed off the coast of Peterhead, the Hywind turbines will be the world’s largest floating wind farm, able to power as many as 19,900 houses. The floating wind farm has a significant advantage over traditional turbines in that it does not need to be attached to the seabed itself, but is held in place with a mooring spread and anchoring system. The result could point the way for larger wind farms to be built in deep water, which is not currently possible. Installations like these are helping Scotland to continue to ramp up its use of renewable energies, which accounted for around half of consumption last year. That could go some way to helping the UK in its contribution to EU renewable ambitions of 20% overall energy from renewables by 2020. European Union members, as well as Norway, have drawn non-binding targets for wind power in light of the renewable energy targets for 2020.

Some countries have seen significant results, with Germany achieving a one-day record of 78% of power needs coming from renewables, while Denmark recently made headlines with a 140% achievement – so much energy, in fact, that they supplied neighbouring countries with the surplus.

Nevertheless, a report published by the European Commission shows that most nations are falling behind in their original commitments to wind power. The colour assessment bellow is green if nations have already achieved 75 % of the 2020 target, yellow if between 40% and 75% and red if less than 40%. 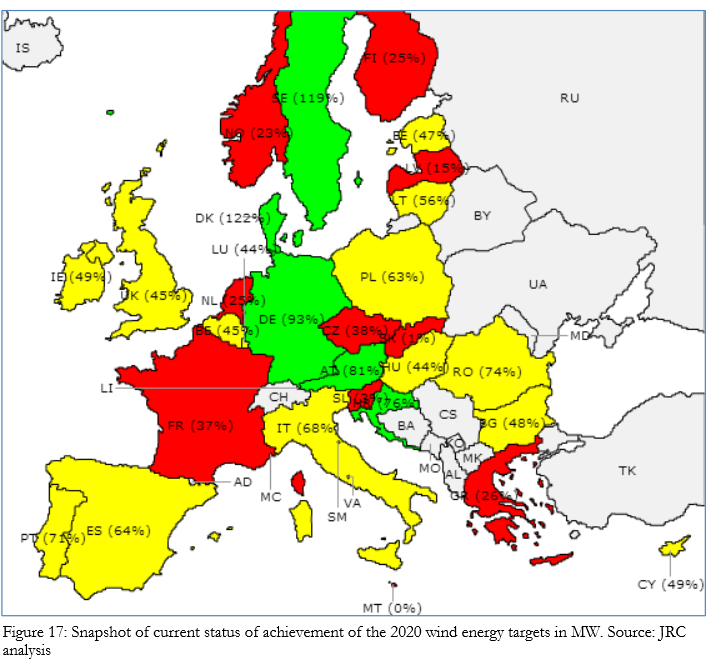