What leaders really need to know about disruption

While the innovation industry may be experiencing a golden age, according to several measures, the ideas industry for innovation may be in a state of crisis. We know we are in trouble, when the ideas industry gets embroiled in discussing itself rather than developing fresh approaches for innovative problem-solving. The December issue of theHarvard Business Review just landed in my mailbox, in which Clayton Christensen revisits that most famous of innovation ideas in the article, “One More Time: What is Disruptive Innovation?” Given the number of times the phrase “disruptive innovation” has been invoked in the last 20 years, one would have thought that the question would not need to be asked.

Disruptive innovation has been at the center of a fierce debate of late. First, Harvard’s Jill Lepore came out with a shot across the bow last year in The New Yorker, aimed at her colleague across the Charles River; sample sentence: “Christensen’s sources are often dubious and his logic questionable.” The lobbing of munitions at the nation’s oldest university led to more fireworks. A former dean of Harvard College, referred to the row as “fun to see a Harvard snake oil salesman debunked by another Harvard colleague.”  Down-river from Harvard, the management publication from MIT, The Sloan Management Review, questioned whether disruptive innovation is even a useful theory, while the Chronicle of Higher Education chronicled the “undoing of disruption” for the wider academic community. 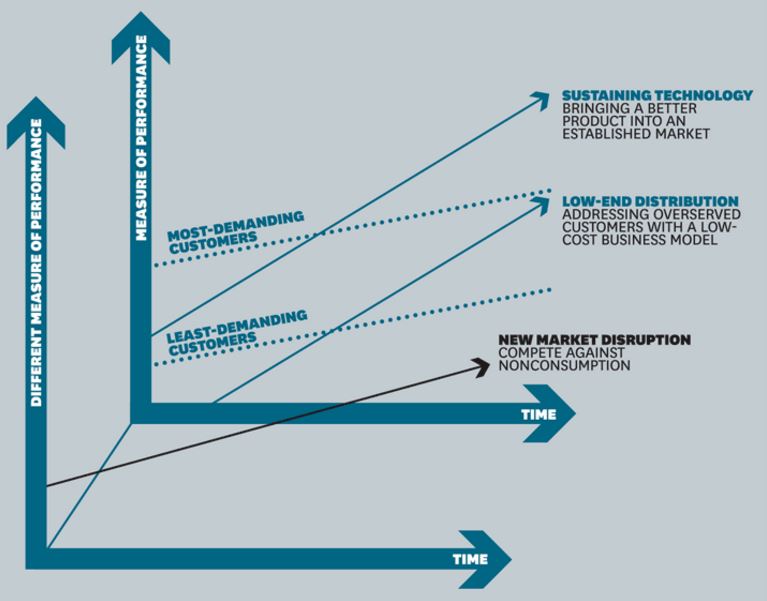 Where does all the turmoil leave the hapless manager charged with some actual innovating and keeping up with those very real disruptive forces?  Unfortunately, far from being a strategic blueprint for innovators, for the vast majority, the idea of disruption has begun to have the opposite effect, of stifling innovative thinking and action.

Disruptive Automatons: First, I often find that managers who are supposed to “think different” have turned into automatons, whose repetition of the disruption mantra has displaced real strategy. Disruptive innovation has become a mental crutch — the constant invocation of the term sends a signal that you “get it” that the status quo won’t last forever. It also helps avoid responsibility for thinking critically, of doing the hard work of coming up with truly meaningful and actionable ideas.

Disruptive Paranoia: A second challenge arises when managers look to the theory of disruptive innovation as a roadmap or a predictive tool. Of the many threats on the horizon, which ones are the most critical and demand the greatest focus? Questions such as these are critical not only for the incumbents whose businesses are vulnerable, but also for potential entrants and their investors and partners. According to the analysis that Andrew King and Baljir Baatartogtokh reported in the Sloan Management Review article, only seven of the 77 business case studies covered in two best known books on disruption, “The Innovator’s Dilemma” and “The Innovator’s Solution” fit Christensen’s own criteria of what constitutes disruptive innovation.

Lepore, too highlights the problems with using disruption as a predictive guide by revisiting many of the case studies; she concludes that “It makes a very poor prophet.” For a manager, this lack of prescriptive power is costly, as every threat to an incumbency may seem like the next disruption.

Brand Disrupt: A third reason for concern is that “disruption” has created an entire industry that does little other than use the word as a brand. Consider just the number of industry conferences alone that use the word: TechCrunch Disrupt, Digital Disruption, Disruption and the Energy Industry, Disrupting Mobility, Insurance Disrupted –- a small sampling from this year. The overuse of the word takes away from any meaningful ways of making distinctions between different kinds of competitive threats and opportunities and offering practical decision frameworks or criteria that can stimulate creative problem-solving.

What is to be done? Before we run the risk of throwing the baby out with the bathwater, I would note that the mechanics underlying the original idea from Christensen (and others, such as McKinsey’s Richard Foster, who had put forth similar concepts even earlier and reiterated in the December Harvard Business Review article) are sound.

To my surprise, few (including Christensen himself) seem to have made the connection to the fact that the mechanics underlying disruption – “low end disruption” emanating from an entrant who sees an opportunity in a less profitable segment of the market– is simply an outcome of the oldest tenets of good business strategy. One of the first rules of strategy, and what is taught in practically every business school, is to choose where to play, especially in the most attractive or most profitable segments of the market. Acting on this idea automatically implies that you would create the opening for an entrant who can occupy unoccupied territory at the low attractiveness end of the market.

This is, after all, the first step in the Christensenion journey of disruption. The second step of the journey is that the incumbent retreats even further into a more circumscribed segment after the industry attractiveness shifts after entry — once again, classic strategy would endorse the move.

The primary practical lesson therefore is the following: while you have a group that decides and executes on strategy for your organization, set up a parallel group that develops the “anti-strategy” — the task is to anticipate the logic that different entrants might use to occupy the segments where your firm has chosen not to play. The collisions between the recommendations of the two groups will give you a roadmap for what the organization must anticipate. Based on the strength of the anti-strategists’ rationale, you could prioritize the severity of the alternative disruptive threats and allocate resources accordingly.

Disruption is not a radical idea. The academic debate runs the risk of radicalizing it and absorbing even more management time and attention. It is time we disrupted the endless talk of “disruption” and went back to the first principles of old-fashioned business strategy.  The core idea has been lurking there all along. Now, it is time to focus on acting on it.

Author: Bhaskar Chakravorti is a Contributor at The Washington Post.

From the personal to the political, Barack Obama’s recommended reading covers a wide range of themes. Here are his top three books and authors.

Meet the Leader podcast: Verizon's Hans Vestberg on how to focus on what's most important

The CEO of Verizon, shares how he sharpens his leadership skills, why he charts his time, and why he's dedicated his life to bridging connectivity gaps.

How to be a courageous leader, according to the president of Microsoft U.S.

Are you ready for hybrid workplaces?

The best advice from the top: this week's Meet the Leader podcast