What’s the future of work in developing countries?

In mid-December, the United Nations will launch the latest of its annual landmark Human Development Reports. This year’s report focuses on the nature of work: how the way we earn a living is being transformed by economic globalization, new technologies, and innovations in social organization. The outlook for developing countries, in particular, is decidedly mixed.

For most people most of the time, work is mostly unpleasant. Historically, doing lots of backbreaking work is how countries have become rich. And being rich is how some people get the chance to do more pleasant work.

Thanks to the Industrial Revolution, new technologies in cotton textiles, iron and steel, and transportation delivered steadily rising levels of labor productivity for the first time in history. First in Britain in the mid-eighteenth century, and then in Western Europe and North America, men and women flocked from the countryside to towns to satisfy factories’ growing demand for labor.

But, for decades, workers gained few of the benefits of rising productivity. They worked long hours in stifling conditions, lived in overcrowded and unsanitary housing, and experienced little growth in earnings. Some indicators, such as workers’ average height, suggest that standards of living may have even declined for a while.

Eventually, capitalism transformed itself and its gains began to be shared more widely. This was partly because wages naturally began to rise as the surplus of rural workers dried up. But, equally important, workers organized themselves to defend their interests. Fearing revolution, the industrialists compromised. Civil and political rights were extended to the working class.

Democracy, in turn, tamed capitalism further. Employment conditions improved as state-mandated or negotiated arrangements led to reduced working hours, greater safety, and family, health, and other benefits. Public investment in education and training made workers both more productive and freer to exercise choice.

As a result, labor’s share of the enterprise surplus rose. While factory jobs never became pleasant, blue-collar occupations now enabled a middle-class standard of living, with all its consumption possibilities and lifestyle opportunities. 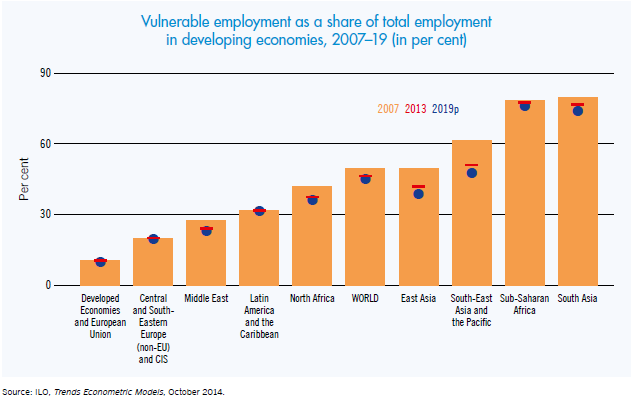 Eventually, technological progress undermined industrial capitalism. Labor productivity in manufacturing industries rose much faster than in the rest of the economy: The same or higher quantity of steel, cars, and electronics could be produced with far fewer workers. So the “excess” workers moved to service industries – education, health, finance, entertainment, and public administration, for example. Thus was born the post-industrial economy.

Work became more pleasant for some, but not for all. For those with the skills, capital, and savvy to prosper in the post-industrial age, services offered inordinate opportunities. Bankers, consultants, and engineers earned much higher wages than their industrial-age forebears.

Equally important, office work allowed a degree of freedom and personal autonomy that factory work never provided. Notwithstanding long hours (perhaps longer than in factory jobs), service professionals enjoyed much greater control over their daily lives and workplace decisions. Teachers, nurses, and waiters were not paid nearly as well, but they, too, were released from the humdrum mechanical drudgery of the shop floor.

For less skilled workers, however, service-sector jobs meant giving up the negotiated benefits of industrial capitalism. The transition to a service economy often went hand in hand with the decline of unions, employment protections, and norms of pay equity, greatly weakening workers’ bargaining power and job security.

So the post-industrial economy opened up a new chasm in the labor market, between those with stable, high-paid, and fulfilling services jobs and those with fleeting, low-paid, and unsatisfying jobs. Two factors determined the share of each type of job – and thus the extent of inequality produced by the post-industrial transition: the education and skill level of the workforce, and the degree of institutionalization of labor markets in services (in addition to manufacturing).

Inequality, exclusion, and duality became more marked in countries where skills were poorly distributed and many services approximated the textbook “ideal” of spot markets. The United States, where many workers are forced to hold multiple jobs in order to make an adequate living, remains the canonical example of this model.

The vast majority of workers still live in low- and middle-income countries and have yet to go through these transformations. There are two reasons to believe that their future path will (or need) not unfold in quite the same way.

First, there is no reason that safe working conditions, freedom of association, and collective bargaining cannot be introduced at earlier stages of development than has occurred historically. Just as political democracy need not wait for incomes to rise, strong labor standards need not lag behind economic development. Workers in low-income countries should not be deprived of fundamental rights for the sake of industrial development and export performance.

Second, the forces of globalization and technological progress have combined to alter the nature of manufacturing work in a way that makes it very difficult, if not impossible, for newcomers to emulate the industrialization experience of the Four Asian Tigers, or the European and North American economies before them. Many (if not most) developing countries are becoming service economies without having developed a large manufacturing sector – a process I have called “premature de-industrialization.”

Could premature de-industrialization be a blessing in disguise, enabling workers in the developing world to bypass the drudgery of manufacturing?

If so, how such a future could be constructed is not at all clear. A society in which most workers are self-proprietors – shopkeepers, independent professionals, or artists – and set their own terms of employment while making an adequate living is feasible only when economy-wide productivity is already very high. High-productivity services – such as IT or finance – require well-trained workers, not the unskilled kind that poor countries have in abundance.

So there is both good and bad news for the future of work in developing countries. Thanks to social policy and labor rights, workers can become full stakeholders in the economy much earlier in the process of development. At the same time, the traditional engine of economic development – industrialization – is likely to operate at much lower capacity. The resulting combination of high public expectations and low income-producing capacity will be a major challenge for developing economies everywhere.

3 ways to improve diversity and inclusion in your organization

Only systemic change can right the wrongs of systemic racial and socio-economic inequalities.

How remote work could bring about the next wave of globalization

In response to lockdown, many companies moved their operations online, allowing employees to work from anywhere in the world, potentially ushering in a new era of globalization.

Want to build skills and inclusivity? It's all about peer power

How can governments protect society from the trauma of unemployment?

These are the countries with the highest density of robot workers

Here's why neurodiversity is so important at work