The year 2015 was defined by refugees. An estimated 1 million of them arrived in Europe from conflict-ridden countries such as Iraq, Syria and Afghanistan. From Turkey, many travelled by sea to Greece, hoping for a better and safer life in Europe. 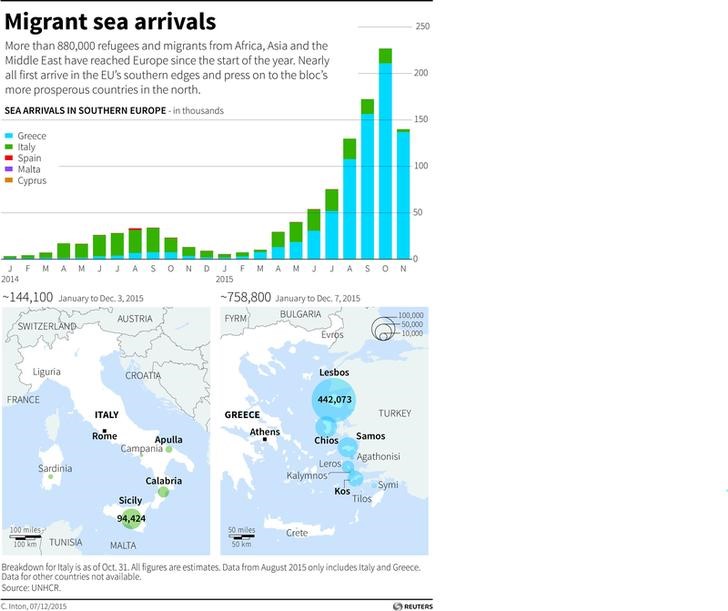 For many refugees, Germany was the ultimate destination. There, their arrival caused division among citizens and political parties. But as the below chart shows, the economic impact of these refugees is likely to be positive in the long run, even if the short-term economic consequences are negative. 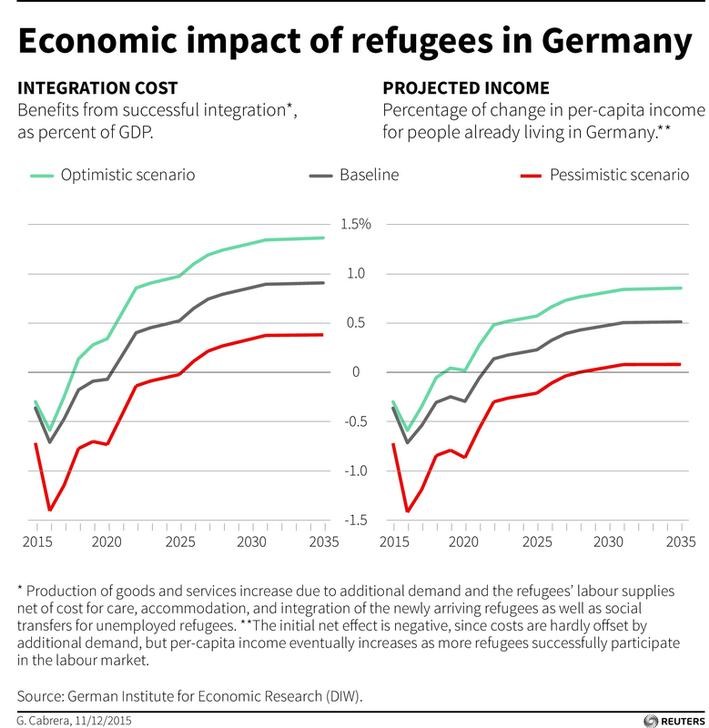 On the economic front, global growth remained subdued, with many emerging markets slowing or even going into reverse. Global growth was estimated at 3.3%, marginally lower than in 2014, the IMF said. Looking ahead to 2016, the Fund expects growth to accelerate to 3.8%. For the next two years, the OECD expects the highest G20 growth in India, China and Indonesia, with growth rates for each exceeding 5%. More moderate growth rates of 1.5% to 2.5% are expected in the US, UK and Europe, and Brazil and Russia look set to return to positive growth in 2017. Looking back at 2015, China continued to be a major contributor to global GDP growth. However, its year-on-year growth slowed to under 7%, reaching the lowest level since the financial crisis of 2008-2009. The slowing growth in China went hand-in-hand with growing debt levels, and a cooling of the real estate market. Overdue and non-performing loans, an important indicator of the future financial performance of banks, have been on the rise for the past two years. 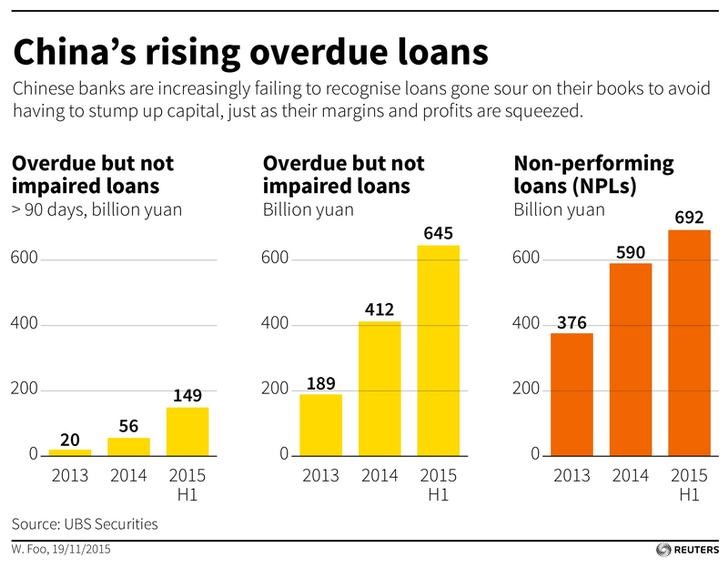 All in all, though, the Chinese economy still contributed a very substantial amount to global economic growth, thanks in large part to its consumers. Single’s Day, China’s most important consumer day, surpassed America’s Cyber Monday as the world’s biggest online shopping day in 2012, and is now more than four times its size in terms of sales. Despite China’s mixed economic performance, there was some good news when the Chinese yuan was included in the IMF currency basket for the first time. Its inclusion as a world reserve currency means the yuan now has a similar standing to the dollar, the euro, the yen and the pound sterling. In the US, with China responsible for close to half of global economic growth, the macroeconomic evolution was more positive. Through the course of the year, unemployment fell below 5% for the first time since the crisis. This trend allowed the Federal Reserve to increase interest rates for the first time in almost a decade, from 0 to 25 basis points. Other emerging markets, especially those dependent on commodities exports, had a difficult year as well, as the general trend of falling commodity prices continued in the first half of 2015. Oil, one of the few commodities which had risen considerably (it traded at $60 in May), was back at below $40 at the end of the year. In health, if 2014 was the year of Ebola, 2015 was the year Ebola was stopped. Sierra Leone, Liberia and Guinea, the three countries most affected by the virus, with thousands of death, were largely Ebola-free towards the last few months of the year, though a few new cases caused concern. 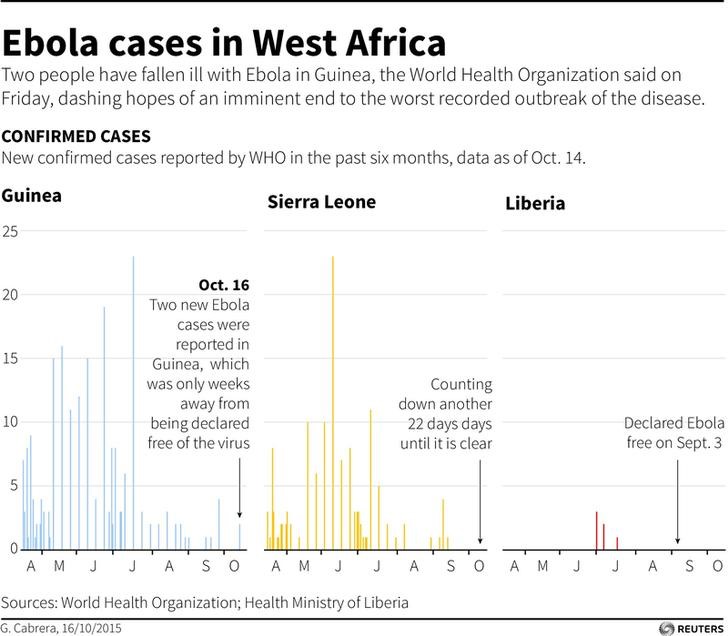 Finally, 2015 was also the year of climate – in both a bad and a good sense. On the negative side, 2015 turned out to be the warmest on record in many countries. December was a case in point, with T-shirt weather instead of snow from Paris to New York. But 2015 was also the year of the Paris Agreement, the long-awaited global political accord that aims to curb global warming and keep it below 2°C in the decades to come. As the below chart shows, this accord was much needed, as unilateral commitments announced before the summit were largely insufficient to meet the eventual goal.

Crucially, the Paris Agreement is supported by all the world’s biggest emitters, with both the US and European leaders actively pushing for and backing the accord. Almost as important was the participation of China and India, which were left out of the 1997 Kyoto Protocol because of their “developing country” status, but by now have become both economic and emissions powerhouses. 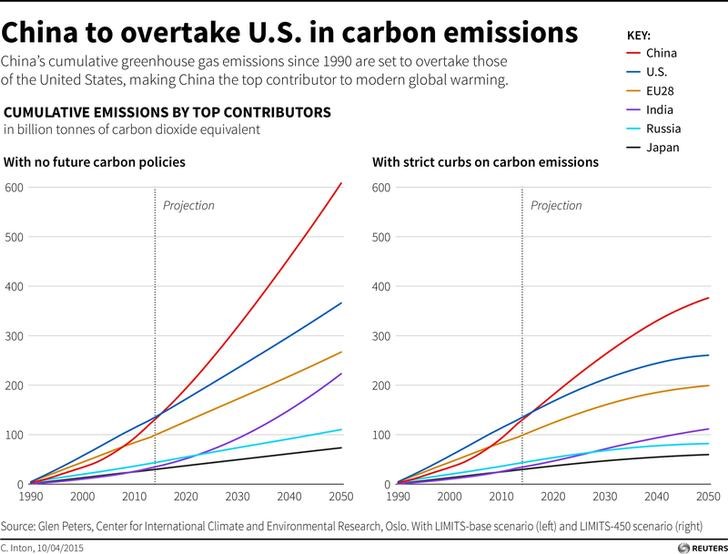 Author: Peter Vanham is Senior Media Manager at World Economic Forum. Previously, he was reporting on emerging markets for FinancialTimes.

Essential reading ahead of discussions at Davos 2022 - where leaders will come together to find global solutions to address unprecedented global challenges.