This article is published in collaboration with Wonkblog.

The world’s most famous inequality researchers unveiled a new way of adding up the growing gap between the super-rich and everyone else on Tuesday.

The findings by economists Emmanuel Saez, Gabriel Zucman and Thomas Piketty, which are preliminary,  were hotly anticipated ever since the American Economic Association conference posted a one-paragraph summary of their results ahead of the event in San Francisco. “In contrast to survey and individual tax data, we find substantial increase in average real pre-tax incomes for the bottom 90% since the 1970s,” one line in the preview said, potentially suggesting that concerns about a stagnant middle had been overblown.

That summary was greeted with cheers by  some conservatives that proof that Democrats, particularly Hillary Clinton, have been wrong to focus on income inequality and middle-class wage stagnation so much.

On Tuesday, the economists said  they analyzed inequality trends using a new combination of tax, survey and national accounts data, which the economists say more accurately captures income levels across the population over time. By their analysis, the bottom 90 percent appears to have done better since the late 1970s than previously estimated — but not much better. You can see the trend in the following slide from their presentation. 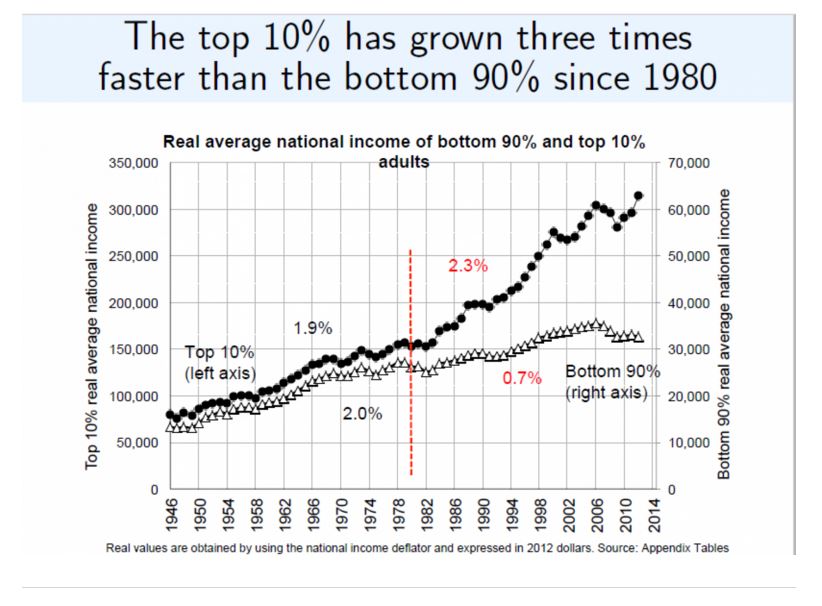 Instead of slightly declining, after adjusting for inflation, since the late 1970s, the average income for Americans in the bottom 90 percent now appears to have increased by 0.7 percent a year.

As you can see, those trends are a big departure from the preceding decades, when income grew relatively evenly at all levels.

By 2012, the economists found, more than half the income in America went to the top 10 percent of earners. (That’s before accounting for taxes and transfer payments such as Social Security, which the trio will account for in an upcoming paper using the same new data.)

The new data still show inequality widening over the last half-century. The share for the top 10 percent in 2012 is higher than any other recorded year, dating back to 1917. In recent years, the economists find, that is largely attributable to a spike in income for the very rich from capital gains, dividends and other capital income sources, as opposed to wages paid for labor.

The newly described income growth for the 90 percent “does make a little difference” in the inequality debate, “but not a lot,” Zucman said in an interview.

“The bottom line,” he said, “is an economy where the income for the bottom 90 percent grows only 0.7 percent, is not doing very well.”

Thanks to slow income growth early in the 2000s and the effects of the Great Recession and its aftermath, Zucman and his co-authors found, income for the 90 percent hasn’t grown on net since the turn of the century.