Will 2016 bring a wave of sovereign debt defaults?

When it comes to sovereign debt, the term “default” is often misunderstood. It almost never entails the complete and permanent repudiation of the entire stock of debt; indeed, even some Czarist-era Russian bonds were eventually (if only partly) repaid after the 1917 revolution. Rather, non-payment – a “default,” according to credit-rating agencies, when it involves private creditors – typically spurs a conversation about debt restructuring, which can involve maturity extensions, coupon-payment cuts, grace periods, or face-value reductions (so-called “haircuts”).

If history is a guide, such conversations may be happening a lot in 2016.

Like so many other features of the global economy, debt accumulation and default tends to occur in cycles. Since 1800, the global economy has endured several such cycles, with the share of independent countries undergoing restructuring during any given year oscillating between zero and 50% (see figure). Whereas one- and two-decade lulls in defaults are not uncommon, each quiet spell has invariably been followed by a new wave of defaults.

The most recent default cycle includes the emerging-market debt crises of the 1980s and 1990s. Most countries resolved their external-debt problems by the mid-1990s, but a substantial share of countries in the lowest-income group remain in chronic arrears with their official creditors.

Like outright default or the restructuring of debts to official creditors, such arrears are often swept under the rug, possibly because they tend to involve low-income debtors and relatively small dollar amounts. But that does not negate their eventual capacity to help spur a new round of crises, when sovereigns who never quite got a handle on their debts are, say, met with unfavorable global conditions.

And, indeed, global economic conditions – such as commodity-price fluctuations and changes in interest rates by major economic powers such as the United States or China – play a major role in precipitating sovereign-debt crises. As my recent work with Vincent Reinhart and Christoph Trebesch reveals, peaks and troughs in the international capital-flow cycle are especially dangerous, with defaults proliferating at the end of a capital-inflow bonanza. 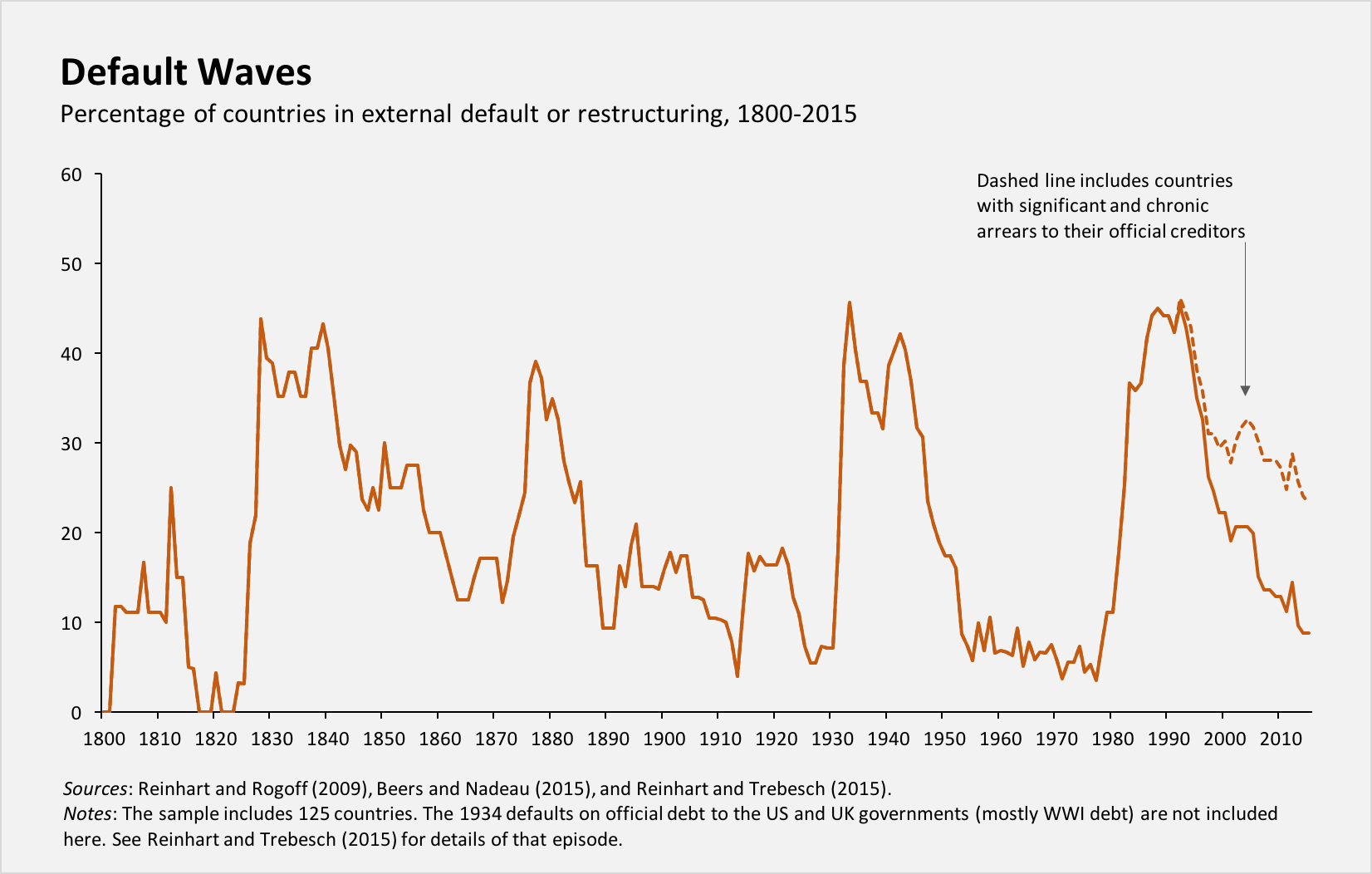 As 2016 begins, there are clear signs of serious debt/default squalls on the horizon. We can already see the first white-capped waves.

For some sovereigns, the main problem stems from internal debt dynamics. Ukraine’s situation is certainly precarious, though, given its unique drivers, it is probably best not to draw broader conclusions from its trajectory.

Greece’s situation, by contrast, is all too familiar. The government continued to accumulate debt until the burden was no longer sustainable. When the evidence of these excesses became overwhelming, new credit stopped flowing, making it impossible to service existing debts. Last July, in highly charged negotiations with its official creditors – the European Commission, the European Central Bank, and the International Monetary Fund – Greece defaulted on its obligations to the IMF. That makes Greece the first – and, so far, the only – advanced economy ever to do so.

But, as is so often the case, what happened was not a complete default so much as a step toward a new deal. Greece’s European partners eventually agreed to provide additional financial support, in exchange for a pledge from Greek Prime Minister Alexis Tsipras’s government to implement difficult structural reforms and deep budget cuts. Unfortunately, it seems that these measures did not so much resolve the Greek debt crisis as delay it.

Another economy in serious danger is the Commonwealth of Puerto Rico, which urgently needs a comprehensive restructuring of its $73 billion in sovereign debt. Recent agreements to restructure some debt are just the beginning; in fact, they are not even adequate to rule out an outright default.

It should be noted, however, that while such a “credit event” would obviously be a big problem, creditors may be overstating its potential external impacts. They like to warn that although Puerto Rico is a commonwealth, not a state, its failure to service its debts would set a bad precedent for US states and municipalities.

But that precedent was set a long time ago. In the 1840s, nine US states stopped servicing their debts. Some eventually settled at full value; others did so at a discount; and several more repudiated a portion of their debt altogether. In the 1870s, another round of defaults engulfed 11 states. West Virginia’s bout of default and restructuring lasted until 1919.

But the US Federal Reserve’s move to increase interest rates, together with slowing growth (and, in turn, investment) in China and collapsing oil and commodity prices, has brought the capital inflow bonanza to a halt. Lately, many emerging-market currencies have slid sharply, increasing the cost of servicing external dollar debts. Export and public-sector revenues have declined, giving way to widening current-account and fiscal deficits. Growth and investment have slowed almost across the board.

From a historical perspective, the emerging economies seem to be headed toward a major crisis. Of course, they may prove more resilient than their predecessors. But we shouldn’t count on it.

Image: A view shows the headquarters of a business. REUTERS.

Explainer: What is the green bond market and why is it growing so fast?

The market for green bonds is growing exponentially. They must have a positive environmental impact and support the world's sustainability projects.