What if we fail to provide for our ageing population?

Dr Alexandre Kalache, an expert on the ageing demographic, on why we need a radical overhaul of retirement. The interview is part of the Risk Response Network’s “What if?” series.

What is your main field of expertise and current research?
I am a medical doctor and my expertise is on ageing, population ageing and the implications for society at large.

Given your research, what would you say is the most under-appreciated risk?
The risk we face is ignoring the consequences of the ageing global population – and in failing to provide for it.

So, what would you say is the risk if we ignore the issue of ageing?
Ageing has been the most important societal achievement of the 20th century, during which we added 30 years to life expectancy at birth. We have a life expectancy of over 80 in more than 20 countries, and between 75 and 80 in another 50 countries, with life expectancy in pretty well all countries rising. We continue to add more years, and yet we talk about ageing as a problem. It’s time to talk about it as an opportunity. The greatest risk is to continue to ignore it.

If we fail to prepare and provide for our ageing populations, a range of scenarios will unfold, and are already unfolding around the world, which are both damaging to ageing people as individuals, and which will prove a growing cost burden to the global economy.

The genie of growing life expectancy is out of the bottle, and cannot be put back. We must choose to make this a productive and positive period of life, or bear the costs as a society, and waste a rich and growing resource.

How would you frame this risk as a hypothetical scenario: “what if” this was to actually happen?
At the end of the 19th century, Bismarck invented the social security system we know today. At that time, few people reached the age of 65, and those who did were in poor health. Economically speaking, it made sense to send them home with a little pension. It wasn’t much. It was better than keeping the person at work as if they were productive, when that was no longer feasible physically. 130 years later, we still deal with ageing as if it were the 19th century. Life expectancy is 35 years longer than it was in Germany 130 years ago. In Western Europe, a woman who reaches 60 will live another 30 years, at home, doing nothing. It’s not feasible.

Those 30 years of life after work must be made productive. If not, the cost of maintaining a rapidly growing older population will have a devastating effect on younger generations, who simply won’t be able to generate the tax income to support older people’s quality of life and growing healthcare costs.

It will be a problem to be faced all over the world. In developing countries the problem will be felt most severely.

In your analysis, how might this scenario unfold?
What is happening in Africa now, is an example of how we undervalue, and under provide for, the resource that is our ageing population – and the social consequences.

Who looks after the more than 18 million children orphaned by AIDS? The future human capital for Africa? Older people – and almost always women. This poor grandmother, without information, health care or government support, who has watched her own children dying from AIDS, is now expected to spend her old age as the main carer to her grandchildren, sometimes eight or ten orphans. Yet there is virtually no help and little protection for these women – not even healthcare to ensure she is physically fit to look after her family.

The situation is a mess and it is becoming a crisis, for the women, the children they look after, and for the agencies who need to step in when older people are no longer able to do this important job.

Who would feel the impact of this failure to prepare for ageing population most, and how?
The first and most important risk is at the individual level. An ageing person risks living unprotected, unrewarded, and discriminated against. This happens throughout the world, but the poorer the country, the worse the situation.

In developing countries, 80% of the population is without social security, or income security. They don’t have access to health services, let alone social services. Ageing people rely entirely on their families.

However, a healthy older person can be a considerable resource to the family, the community, to the economy. Yet, year after year, agency after agency, government after government fail to recognise the contribution that older people make.

I am Brazilian. Over the last 15 to 20 years, Brazil has taken steps to change the difficult situation for older people living in that country with some success. Firstly, since 1988, healthcare has become a constitutional right for all, including older people. This is significant, because it removes the horror scenario that people encounter when they grow old and get sick without being able to look after themselves, or knowing who will.

A second considerable improvement is that older Brazilians are now given a pension. It may not be much, but that money is theirs, it’s sacred, and it comes regularly at the end of the month. What do they do with this money? They don’t buy make-up. They buy food for their grandchildren. They buy a sewing machine for a daughter so that she can help with the family income. Suddenly older people have become a resource. The family has a vested interest in keeping them healthy and happy, not as a burden, but as a resource to the family.

The third important piece of good news for older people in my country is that since 2003, Brazil has had a very comprehensive legal framework to protect older people against discrimination. As older people find themselves valued, and no longer discriminated against, their self-esteem grows, with renewed self-esteem and access to healthcare, life expectancy is going up in Brazil.

How well do you think we are prepared for such a contingency?
In 2050, there will be 2 billion older people, pretty well as many older people as the total global population when I was born. It is a completely different world. World leaders are not prepared. Agencies are not prepared. Look at the United Nations, and I can say this because I was the Director of the Ageing and Health Program for the World Health Organisation for 14 years, until 2008. The amount of attention let alone resources that ageing is going to get is negligible.

It is enough to say that 62 years after the Universal Declaration of Human Rights, the United Nations has specific conventions for the rights of children, migrants, women, refugees and disabled people. The only group that doesn’t have a specific convention to protect their rights, is exactly the group that is at most risk of discrimination, the ageing.

Baby boomers are ready to reinvent ageing, but world leaders are not ready to listen. Firstly, there is general social denial of ageing. After all, the highest compliment you can pay, in pretty well any society, is to tell someone they don’t look their age. Are those who do look their age somehow inadequate? This general denial can be extreme when it comes to the leaders themselves. In a belief that projecting youthfulness will attract votes, some international leaders, well into their seventies, have plastic surgery, dye their hair, anything to make them look younger.

This is the social attitude that we have to combat, to expose in the media. We must fight the stereotypes. We have to change the attitude towards ageing. That is what I hope my generation, the baby boomers, will do, so that we can bring the message that the world has changed, and that older people are going to be around in big numbers.

What is your top mitigation approach for this risk?
Governments need to view older people and healthy older people as instruments for social development. As people live longer they need opportunities to recycle their knowledge and skills to allow them to work longer, but this is only part of the picture.

Our generation is not going to age like our grandparents or even our parents. The transition from adulthood into what we can call old age is going to be a transition of 20 or 30 years. This will be a time when people are relatively healthy, have experience, and can be productive. And the baby boomer generation is determined to be so. They are going to force society to accept that older people can continue to contribute. I am 65. At this age, my grandfather had a walking stick, and was walking towards his tomb. I have a completely different prospect ahead of me. We are going to reinvent what ageing is to make it a productive and fulfilling period of our lives.

The generation that created adolescence, the baby boomers, will now create a new concept of ageing.

On the flip side of risk, what opportunities do you see associated with this “what if” scenario?
The World Health Organisation has developed a framework called Active Ageing. Active ageing is defined as a process to optimise opportunities for health, participation and security in order to increase the quality of life as we age. It’s a process that starts in childhood and suggests that the best way to be well in old age is to look after your health from the beginning: which means diet and exercise and avoiding habits like smoking and alcohol. Social determinants are also important: the opportunities to grow through childhood, adolescence and then in adulthood, to be respected, to have a satisfying job and to have an income.

All these things are important when it comes to an active and productive old age, and in ensuring that older people remain part of the solution. For every three older people that work, a vacancy for a young person to join the job market opens up, because of the economic wealth productive older people create. Another aspect of the Active Ageing framework is security: the protection of those who are vulnerable and lose their independence, security in terms of health and financial security.

The world faces a mix of demographic challenges. The 21st century will be the century of ageing. This will present us with the challenges and the opportunities to make ageing a real achievement. If we don’t seize this opportunity, then growing older will become a serious problem.

Pictured: A Tibetan woman weeps in the  in the northern Indian hill town of Dharamsala (Reuters) 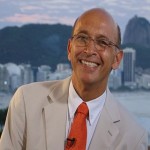 Dr Alexandre Kalache is President of the International Longevity Centre, Brazil and is a member of the World Economic Forum’s Risk Response Network and Global Agenda Council on Ageing. You can read the GAC’s recent report, Global Population Ageing: Peril or Promise? here.