Kandeh Yumkella warns of the severe consequences of a combined oil and food crisis in Africa. The interview is part of the Risk Response Network’s “What if?” series.

What is your main field of expertise?
I have a PhD in agricultural economics, but I have been in an industry agency for 16 years and I am the Director-General of the agency. My area of focus is management and public policy.

What area of research are you focusing on at the moment?
There are three areas. First, I am curious about the interface between energy security, water security and food security in the whole context of sustainable development. Second, I’m interested in agribusiness as a way of reducing poverty in Africa and creating wealth. The third area, in a category of its own, is looking at the global energy architecture.

For me, these three interests are deeply linked. As an example, agribusiness development in Africa requires some degree of energy security. Agribusiness can contribute to food security. And to get agriculture moving in Africa, you also need good water management.

Given your work, what would you say is the most underappreciated risk?
I see three risks. One is an oil crisis with prices reaching US$ 200 per barrel. Simultaneously you could have countries in sub-Saharan Africa experiencing problems with drought or other climate-induced agricultural risks – that’s the second risk. As the International Monetary Fund and other experts have noted, the days of cheap oil and cheap food are gone. Third, and in addition to the other issues, you have high population growth rates in Africa and massive urbanization. The demographic projection for Africa is 1.4 billion by 2025 or 2030, and it already has a huge urbanization rate. But we in the development community are not appropriately considering the confluence of these factors and these demographic pressures; a more holistic view would lead us to more dramatically accelerate the pace of our intervention to these interlinked challenges.

How would you frame this risk as a hypothetical scenario: “what if” this were actually to happen?
Take a poor country, such as Kenya or Ethiopia, and then imagine they have a famine or drought, and the demographic trend they have now has continued for another five years… What if this were to happen? It is not unlikely. How would these countries cope?

In 2008, with a financial crisis, food crisis and oil crisis all occurring at the same time, according to World Bank figures we immediately saw almost 40 million people pushed under the poverty line. There was a huge balance of payments problem and riots kicked off. So, I think that this scenario could realistically be repeated in the future.

The other one for me is the urbanization challenge in Africa, which again is linked to energy access. According to some projections, 60% or more of the African population, particularly in sub-Saharan areas, will be living in cities by 2025 or 2030. But Africa has the lowest energy access rates in the world. Think about it – people packed in cities, no jobs, poor infrastructure and a lack of energy and water systems.

I think this will lead to instability in Africa, which could be worse than the wars we saw in the 1970s. People should remember that the “Arab Spring” began in Africa – in Tunisia, Egypt, Libya and Algeria. I see a potential that this spirit could spread south in a few years, and it could be more severe.

Who is most exposed to this risk?
It is always the poor who have little option for adaptation. They do not have alternative sources of income when oil and food prices jump; their disposable incomes go down immediately and they spend over 50% of their income on food. So there is no doubt in my mind that they will be the most vulnerable because the coping mechanisms and social safety nets do not exist.

How well are leaders prepared for this situation?
I think that there is a lot of dialogue about it, but not enough. Neither are there enough public policy, political will and leadership to accelerate even the energy revolution that is needed to give poor people access to electricity through sustainable means. We don’t have the necessary platforms in place to share knowledge and information about policies that are working. I do not feel there is enough political leadership globally.

What is your top mitigation approach for this risk?
There is a crucial need for strong political leadership on these issues in donor countries, but also in countries where these risks might be high. I also believe that we need to create even more awareness for these vulnerable countries to appreciate that these issues are interconnected, and that the push for a green economy is not necessarily a sanction.

There is a lot of suspicion in developing countries – and justifiably so – that the green economy might curb productivity. We need a new narrative where they see the green economy as beneficial to them. We also need a solid set of funding mechanisms to incentivize green investment and help the most vulnerable countries leapfrog ahead.

So, good political leadership on all these fronts is necessary to mitigate this risk.

On the flip side of risk, what opportunities do you see associated with this scenario?
I see great transformative opportunities in industrial energy efficiency. I know from UNIDO’s programme that some companies are moving to developing countries so that they reduce their cost of operation, and they are looking at energy efficiency very closely. I have seen this in Sri Lanka and I have seen it in Bangladesh, where some textile and garment companies are looking at cogeneration. That means they are harvesting heat and making savings through industrial energy efficiency. That is a major change.

One of the factories I visited in Sri Lanka is going green because they are supplying some big chains in Europe that use greenness as a label to attract customers. Thanks to that opportunity, they have built a company that has 2,000-2,500 employees.

We have termed this set of opportunities “Green Industry”. Can we help countries create wealth and jobs, and show them that greening can be profitable and that there are known technologies or practices that will be beneficial to them and still make them competitive?

If we have better resource efficiency, maybe we will demand less from ecosystems; we will try to extract more from every unit of raw material that we are using. Given the interconnected nature of energy and environmental and social risks, we believe that, as a package, the whole greening industry concept is one of the appropriate mitigation mechanisms.

Pictured: A guard at the Heglig oilfield in Sudan (Reuters) 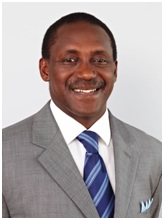 Kandeh Yumkella is the Director-Genera of the United Nations Industrial Development Organization (UNIDO) and a member of the World Economic Forum’s Global Agenda Council on Climate Change 2011.

Africa’s crypto market has grown by $105.6 billion in the last year

Cryptocurrency could potentially be a good alternative to traditional banking in Africa, because this only requires a smartphone.

Africa’s remaining forests are under pressure: This is no time to sideline forest carbon markets

We need both carbon offsetting and deep decarbonization at source, not either/or, to make substantive progress with climate change.