How will capitalism be perceived in 5 years’ time? Pranjal Sharma is a Consulting Editor for Business World. He is also a Member of the Network of Global Agenda Councils.

Earlier in January, while I was walking the corridors of a leading business school in India between guest lectures, I bumped into a professor. In a remarkable display of instant decision-making, the professor asked me to drop by his class that was due in a few minutes.

Happy to meet more bright students, I agreed. The professor then surprised me by sharing the topic for discussion. It was corporate social irresponsibility. For a moment I thought I had heard wrong. Surely a business school that sent its elite cadre of students to the world’s best corporations couldn’t be seeding seditious thoughts in future CEOs?

“Not at all,’’ the professor said. “The students want to know why corporations focus on themselves and not the society. Could you please share your perspective as a media leader?” 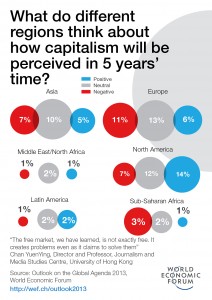 My session was an eye-opener. The students exhibited a healthy scepticism of corporate practices. They were dismayed that many corporations chased profits at the cost of everything else. Many students felt that reforms in corporate behaviour were as important as increased transparency in governance.

For me, this captured the sense of unease with corporations and capitalism that most societies feel these days.

If even business school students are critical of corporations, the future of capitalism looks grim. Capitalism grew out of democracy in many ways. It benefited from open societies with distributed rights and duties of individuals under an equal opportunity framework.

But over time capitalism seems to have undermined every value that nurtured and accelerated its growth. Big corporations demand open governments but shy from transparency themselves. They want freedom to access consumers everywhere, but quietly work on rules that reduce freedom of choice for consumers. These corporations talk about creating wealth for society, but bend rules to plunder environment.

Vocal societies, powered by a young population connected with technology, do not want to accept the dominance of irresponsible capitalists. The Global Agenda Outlook 2013, presented by the World Economic Forum, highlights the poor reputation of capitalism. Most of those surveyed for the report were neutral or negative about the future of capitalism.

Capitalism has to become democratic to survive. Only when it embraces the values of an egalitarian society will capitalism regain respect. For instance, capitalism must help to achieve the Millennium Development Goals and not focus only on billion-dollar deals.

The future of capitalism will then be secure in the hands of approving students.

Experts have explored new evidence for a panel of advanced and emerging economies on the impact of very high temperatures on prices.

COVID-19, US GDP and productivity loss: What we know