The tech breakthrough that will fight climate change

I am writing this from inside a factory, and believe what I am looking at will change the world.

I am looking out onto a large factory floor; the drone of machines is relatively loud, but soothing, and each person here is wearing a hard hat and safety glasses.

About 15 feet from where I am writing is our operations manager, who has been standing next to our plastic pellet production line for most of the past seven hours. What does this line do? On a relatively automated basis, it produces a continuous stream of plastic pellets, and feeds those pellets into large storage boxes. Boxes and boxes of pellets; many still warm from processing, all nearly identical in size and shape.

To the untrained eye, this is a plastic production factory. If you look inside any one of the many bags, boxes, or sacks in the factory, you will see what look and feel like plastic pellets. If you mould parts from those pellets, as we have many times today, you can create a shape or part that is as strong as any plastic part you have touched before.

But if you take a closer look, what you will see is something different. Inside these boxes are plastic pellets, meaning they can be heated and formed into shapes. But there is something very different about them. While most plastic is made from oil or other fossil fuels, for the first time, this plastic is made by pulling carbon out of greenhouse gas emissions and combining it with air to form a polymer. And not just any GHG emissions, but methane emissions – 75% carbon by weight, and over 20 times stronger as a heat-trapping gas than carbon dioxide. This is not just plastic: this is carbon-negative plastic – plastic that sequesters more greenhouse gas than it emits – and this is the beginning of something important.

You see, the debate over climate change has gone nowhere because it revolves around a question that can’t be resolved. The question is not the science. The science is simple: add more heat-trapping carbon into the air, and the air heats up. We have dumped trillions of pounds of heat-trapping greenhouse gas into the air, and the temperature of the earth has increased. We have run the experiment, we have tested our logic, and we were right. 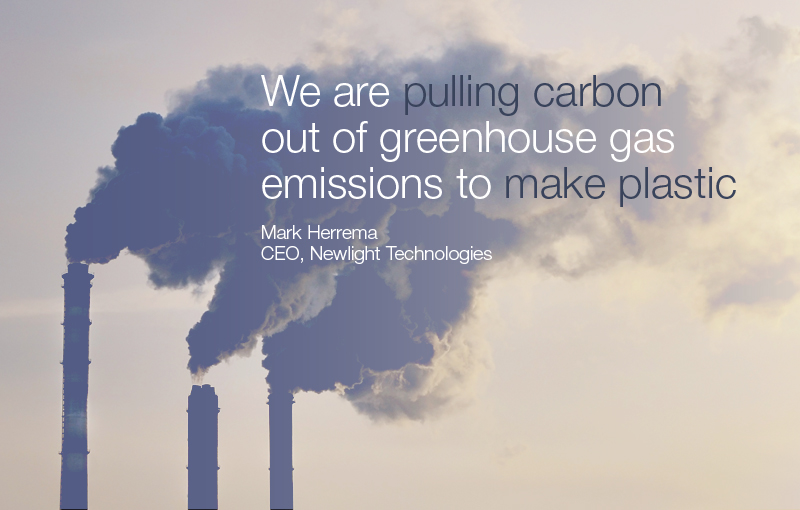 For at least 20 years, the debate has not been over the science. Rather, we have been debating one question: can we justify the economic cost of regulating carbon emissions? The fundamental problem is: both sides hold valid positions. Yes, climate change has the potential to cause significant damage to the earth in the form of flooding, fire, drought, crop failure, food shortage, water scarcity, and a range of other consequences, many of which we are already seeing today. If we leave our moral obligation aside for a moment, climate change caused by elevated greenhouse gas levels is a threat to our resources, our economies and the lives of our loved ones.

However, while the imperative to reduce carbon emissions is clear, there is another side to the debate: regulating carbon in the form of a carbon emission tax, cap or penalty has the potential to inflict near-term economic damage. Carbon emissions are ubiquitous. Every time we turn on a light, heat up the shower, drive our cars, power our batteries ‒ somewhere, somehow, carbon emissions are flowing to make those things possible.

Imagine, then, if you were taxed for each of these activities. Regulating carbon has the potential to make many of the things that are vital to our lives more expensive. Despite our best intentions, our good vision and the overwhelming strength of our science, we cannot ignore this fact, and those who argue against carbon regulation on near-term economic grounds are not out of line.

We must recognize that both sides in the debate hold valid positions, and that, as such, if we want to solve this problem ‒ and we must solve it now ‒ we need to reframe the question. Instead of asking whether carbon regulation can be imposed, what if we searched for a common ground? What if there was a solution that reduced carbon emissions without requiring carbon regulation? A solution that could reduce the amount of carbon we are putting into the air while actually generating economic gains? A solution that replaced oil by harnessing greenhouse gas emissions as a resource? If we had a solution like that, we wouldn’t need carbon regulation. The market itself would drive carbon capture. Sitting here, in this factory, I believe I am watching that solution in action.

Today, right now, as I type, we are pulling carbon out of methane-based greenhouse gas emissions and turning that carbon into carbon-sequestering plastic that costs less than oil-based plastic. With this tool, we have the opportunity to eliminate billions of pounds of carbon emissions every year by incentivizing industry to capture carbon and turn it into sustainable, high-performance, cost-effective plastic.

This technology did not happen overnight. I have personally worked for 12-16 hours nearly every day for almost a decade to reach this point. My partners and teammates at Newlight have dedicated their lives to this technology. With a keystone breakthrough in yield that increased the yield of our conversion process by over 9 times relative to previous efforts, as well as breakthroughs in product performance and scale-up conversion technology, we have made this technology work. It matches oil-based plastic on performance, outperforms oil-based plastic on price, and offers a market-based solution to reversing climate change.

Few things are as powerful as market-driven solutions. As I watch this plastic line and marvel, even today, at the concept of converting greenhouse gas emissions into plastic pellets, I realize: the technology is here and the time to fix climate change is now.

Members of the World Economic Forum Global Future Council on Geopolitics discuss the biggest impact technology will have on geopolitics in the coming year.

All that these technologies need to start transforming our cities is regulatory approval. Are we on the verge of a Blade Runner-style future?

How nanodiamonds could help us treat diseases like cancer and Alzheimer's

These 3 tech visionaries are reinventing the wheelchair