Top 10 most gender equal countries in the world 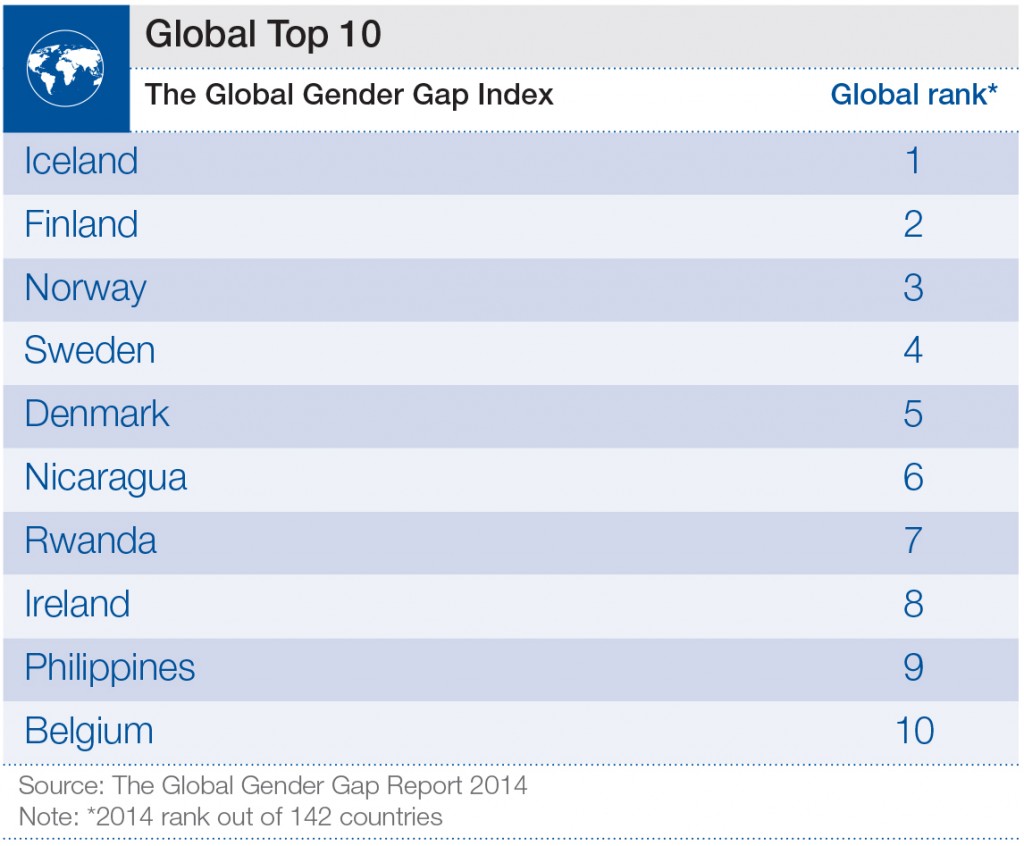 Iceland is ranked first for the sixth consecutive year. Since starting in sixth place in 2006, it has steadily increased its overall score, except this year. This is due to a weak score for health and survival, in which it ranks 128th. Despite this, Iceland has fully closed the educational gender gap and ranks first for political empowerment, having had a female head of state for 20 of the past 50 years.

Finland continues to hold the second position for the third consecutive year and is the highest ranking European Union country. Finland has fully closed its educational gender gap and it performs well on the years with female head of state indicator, ranking seventh out of 142 countries.

Norway places third for the third consecutive year and is the highest ranked country overall for the ability of women to rise to positions of enterprise leadership. It also has the highest rate of contraceptive prevalence among married women or those in a union, and has the smallest difference between the average minutes spent per day on unpaid work by men and women.

Sweden maintains its ranking in fourth overall place for the sixth year. The country ranks fifth for political empowerment, and also ranks third for the proportion of women in parliament and second for women in ministerial positions – 57% of the country’s ministers are women.

Denmark moves up three places from last year in the overall rankings and one place regionally to complete the Nordic top five. It is among the 25 countries that have closed their educational gender gap and is the only country where, on average, women earn more than men. Denmark also has the highest average minutes spent per day by men on unpaid work.

Nicaragua moves up the rankings from 10th place last year and remains the only country from the Latin America and Caribbean region to make it into the top 10, where it has featured for the past three years.

Rwanda is the only country from the sub-Saharan region to be ranked in the top ten. Its high ranking is explained by its strong political empowerment performance and good rankings for economic participation and opportunity. These scores are slightly offset by wider gender gaps in health and survival, and education.

Ireland has slipped two places in the overall rankings since last year, but it remains one of only six countries to have gained more than 10% in its Global Gender Gap Index score over the last 14 years.

The Philippines drops down the rankings from fifth spot last year, but remains the only country from the Asia Pacific region to be placed among the top ten. It is the second best performing country (just after Norway) on the ability of women to rise to positions of enterprise leadership, and it also has the highest percentage of firms in which women participate in ownership.

Belgium enters the top ten rankings for the first time and is among those six countries that have seen a net improvement of more than 10% in their overall Global Gender Gap Index scores since 2000.

Author: Saadia Zahidi is a Senior Director, Head of Gender Parity and Human Capital and Constituents at the World Economic Forum.

Image: Women laugh on the Bund, on the banks of the Huangpu River, in Shanghai September 3, 2009. REUTERS/Aly Song