Being busy with everyday life, many of us, including myself, do not spend much time thinking how our lives will look like in 20 or 30 years. However, when I travel to the countries I work on, I see the challenges faced by the elderly, especially in rural areas.  These challenges include poor access to social and health services, exclusion and simply loneliness.

The countries in Central Europe and the Baltics are ageing.  As a result, the size of the working age population is shrinking, creating labour shortages which could potentially challenge future growth. Ageing is also putting government budgets under pressure from the rise in age-related spending on pensions and healthcare, and the shrinking base of tax contributors.

All of this is well known. Less appreciated, however, is the fact that in many countries there is a distinct geographical pattern to ageing. Sparsely-populated rural areas are seeing an increasing share of elderly people, while urban areas still attract most of the young generation. The greying of the rural population creates a challenge for public policy as rural municipalities often have fewer resources with which to address the needs of their elderly population. 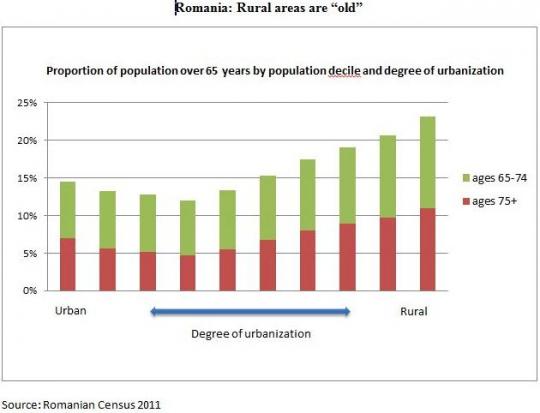 As the figure shows, in Bucharest less than 15% of the urban population is aged over 65. This proportion reaches nearly 25% in the smallest communities. The situation becomes even starker when one looks at the ratio of the 65+ population to working age population – the so-called dependency rate – which can be 2.5 times greater in the smaller rural municipalities compared to urban ones.

The higher proportion of elderly in smaller rural municipalities creates challenges for the funding of social services, especially those funded out of local taxes. While it is true that these municipalities may have to spend less on services for younger people, spending outlays do not move quickly from some lines of spending – such as empty schools – to others. Smaller municipalities, which have a limited pool of local labour, also find it difficult to hire people to provide healthcare and other social support to the elderly.

This problem takes on added complexity if one looks at the proportion of those over 75 years. Over 11 percent of the rural population in the smallest municipalities is in this age group (compared to six percent in large urban areas), and over a third of this age group live on their own. Without people to assist them, this population becomes extremely vulnerable to poverty and isolation.

So, what can be done?  As my colleague Asta Zvinene shows, the large differences in old-age dependency rates between urban and rural communities are mostly caused by emigration, a big part of which reflects internal migration due to urbanization. It is important for policy makers to realize that emigration, especially internal migration to urban areas, is a natural product of development and high old-age dependency rates in rural settings are often the cost of such economic development.

As a first thing, policy makers should acknowledge this burden and consider ways to share it more equally.

Second, a lot more could be done to reduce the inertia in public spending – so public money can move from social services that are underused to those that are in greater demand.

Third, many smaller towns and municipalities are piloting ways of making themselves more attractive as places to live and work. These efforts deserve careful evaluation and the cost-effective measures scaled up.

Fourth, volunteering among older population and community-based self-help groups could be encouraged to strengthen the social fabric and to reduce the dependence of the community on the availability of young service workers.

Finally, it is worth examining how services for the elderly – especially those who live alone – can be provided more efficiently, including through the use of technology.  My father, who suffers from dementia, has to spend a few hours on his own every day between when his caretaker leaves and when a family member can see him in the evening.  He uses a very simple device which dispenses his medicines on a tray. If he does not lift his medicine off the tray (that is, he forgets to take it), the sensor is activated and the device, which is connected to the phone, calls a family member.  This simple technology helps with caregiving without needing a caregiver.

Published in collaboration with The World Bank’s Future Development Blog

Author: Mamta Murthi is Country Director for Central Europe and the Baltic Countries at the World Bank.

Image: A resident holds the hand of a nurse at the SenVital elderly home in Kleinmachnow outside Berlin May 28, 2013. REUTERS/Thomas Peter