In the coming year, we face a number of diverse and significant challenges: growing income inequality, heightened geostrategic tensions, the unsustainable use of our planet’s natural resources and, of course, the climate crisis.

Every year the World Economic Forum taps into the knowledge, observations and experiences of its Global Agenda Council members, asking them to identify the issues that they believe will have the biggest impact on the world over the coming 12 to 18 months. The resulting insights, gathered with the help of the Survey on the Global Agenda, ultimately generate the Top 10 trends – a forecast of the key social, economic and political issues that reside on our collective horizon:

6. Rising pollution in the developing world

10. Growing importance of health in the economy

At the top of this year’s list is worsening income inequality. As the world’s rich continue to accumulate wealth at record rates, the middle class is struggling. Today, the top 1% of the population receives a quarter of the income in the United States. Over the last 25 years, the average income of the top 0.1% has grown 20 times compared to that of the average citizen. Last year, this trend ranked second place in the Outlook; this year, it rises to the top.

Ongoing unemployment concerns, another recurring theme from the previous report, have risen to second place – this time in the form of ‘Persistent jobless growth’. Our economies may be growing, but the number of available jobs is largely failing to keep pace. For many, the situation is urgent and popular dissatisfaction at governmental response is reflected in two subsequent trends – ‘Lack of leadership’ and ‘The weakening of representative democracy’, both of which suggest a troubling disconnect between the public and the authorities that govern them.

Third on the list, rising security concerns around the world threaten the stability of states and their citizens. From renewed violence in Gaza to Russia’s intervention in Ukraine and the rise of Islamic State, geopolitical tensions have dominated headlines for much of 2014. Dedicated efforts are being taken to defuse these conflicts, yet it seems all but certain that two related trends, ‘Rising geostrategic competition’ and ‘Intensifying nationalism’, will continue to propel global concerns over the next 18 months. 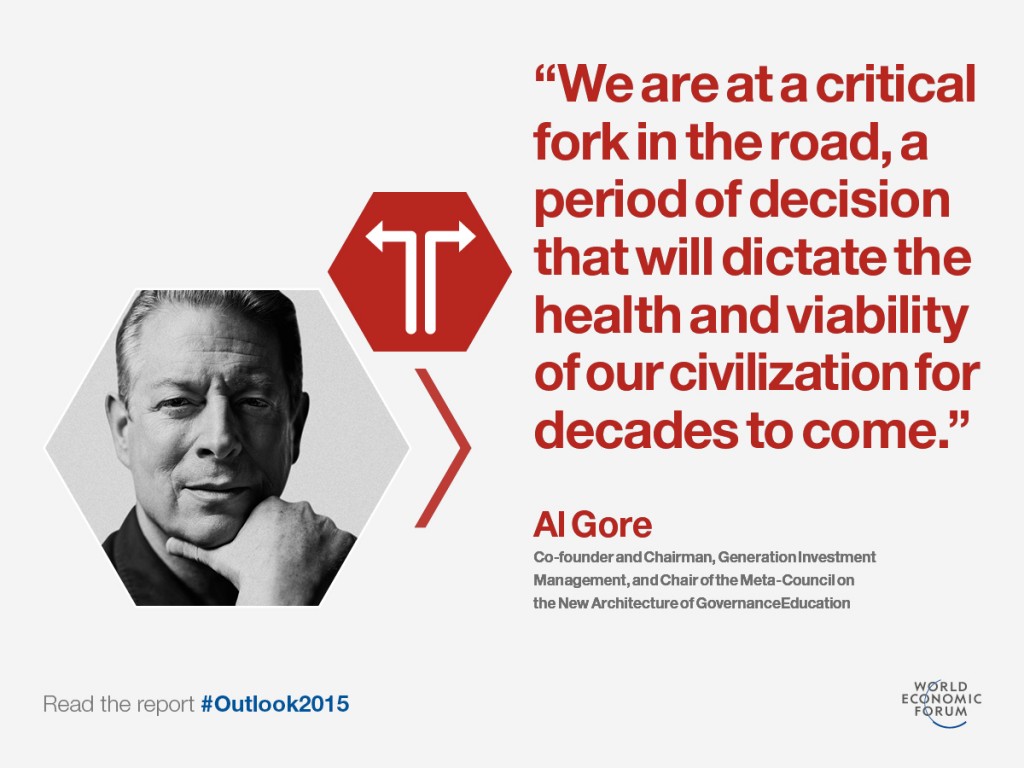 This year, two major themes dominate this list: economic and environmental. These two areas of focus are inextricably linked. Long-term economic prosperity depends on environmental sustainability. Today, we see the consequences of short-term economic thinking and the reckless use of our planet’s resources: water disputes between neighbouring nations, more frequent and powerful extreme weather events brought on by our warming climate, an ongoing global deforestation crisis, a rapidly acidifying ocean, eroding topsoil and agricultural capacity, and an alarming biodiversity crisis unparalleled in modern history.

Now, more than ever before, environmental concerns are coming to the forefront of our global dialogue. We are at a critical fork in the road, a period of decision that will dictate the health and viability of our civilization for decades to come. In 2015, the nations of the world will gather in Paris to negotiate the next global climate agreement. The stakes could not be higher, but I have hope.

To reiterate, the issues we must confront are imposing in their scale and expansive in their reach, but they must be faced with fortitude and with a cooperative, collaborative spirit. The pages that follow contain discussions that highlight the threats – and the opportunities – that dwell at the heart of our Top 10 trends, and explore some of the directions for progress. By acknowledging the issues we face today, we can begin to understand those that may yet lie ahead.

Author: Al Gore is the Chairman and Co-Founder, Generation Investment Management, and former Vice-President of the United States (1993-2001).

But it paints a downbeat assessment of economic growth, given the ongoing pandemic and higher rates of inflation.

Sustainable finance has come of age, outperforming conventional investments and helping to address climate change. Here’s what you need to know.