The link between economic and religious freedoms

Freedom of belief is one of three factors significantly associated with global economic growth, according to a recent study by researchers at Georgetown University and Brigham Young University. The study looked at the GDP growth of 173 countries in 2011 and controlled for two-dozen different financial, social and regulatory influences.

While a study such as this does not prove that religious freedom causes economic growth, it does suggest the matter deserves more consideration.

Indeed, as the world navigates away from years of poor economic performance, freedom of religion or belief may be an unrecognized asset. For instance, the same study finds a positive relationship between religious freedom and 10 of the 12 pillars of global competitiveness, as measured by the World Economic Forum’s Global Competitiveness Index. (See the chart, which shows innovative strength to be more than twice as likely in countries with low religious restrictions and hostilities.) 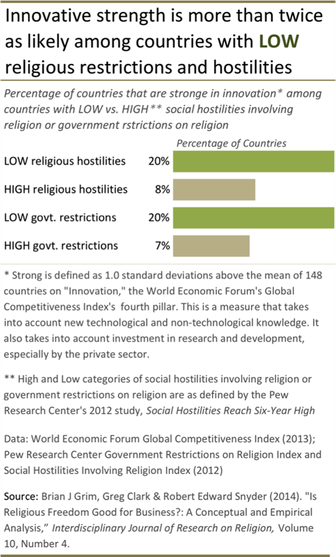 Research indicates that when freedom of religion or belief is put to practice, it has the following effects:

Arguably, ensuring freedom for religious groups in China and elsewhere is a way to stimulate and sustain growth in the decades ahead. It’s something every country can benefit from.

Author: Brian J Grim is the president of Religious Freedom & Business Foundation and a member of the World Economic Forum’s Global Agenda Council on the Role of Faith.

Image: The twin minaretes of a mosque are seen with office towers along Sheikh Zayed Road in Dubai, November 29, 2009. REUTERS/Steve Crisp