Geo-economic conflict is the number one risk facing the world right now, according to the Global Risks 2015 report.

Experts believe we face a greater threat of terrorist attacks and state crises, while water shortages and extreme weather could create more havoc and be more frequent due to intensifying climate change.

The good news is that the capacity of the human race to avoid risks, mitigate them and strengthen resilience is now higher than ever. And 2015 in particular presents a number of opportunities to address global risks. There are reasons to believe that this year may bring significant action.

Take climate change, a trend that drives a number of risks such as water shortages or weather-related natural disasters. After many failed efforts to come to an international agreement on carbon reductions, developments last year provided a glimmer of hope, as they could provide overarching support ahead of the COP15 meeting in Paris.

For example, at the UN Climate Summit in September 2014, leading businesses and many governments expressed their support for global climate pricing and committed to end deforestation by 2030. The mayors of over 2,000 cities pledged to make major carbon cuts in cities. Later in the year, the United States, China and the EU committed to a significant cut in carbon emissions and the preparatory summit in Lima saw developing countries accept the need to cap emissions, a major stepping stone towards an agreement. All these developments give real hope that the Paris talks in November/December will see real progress in climate change. 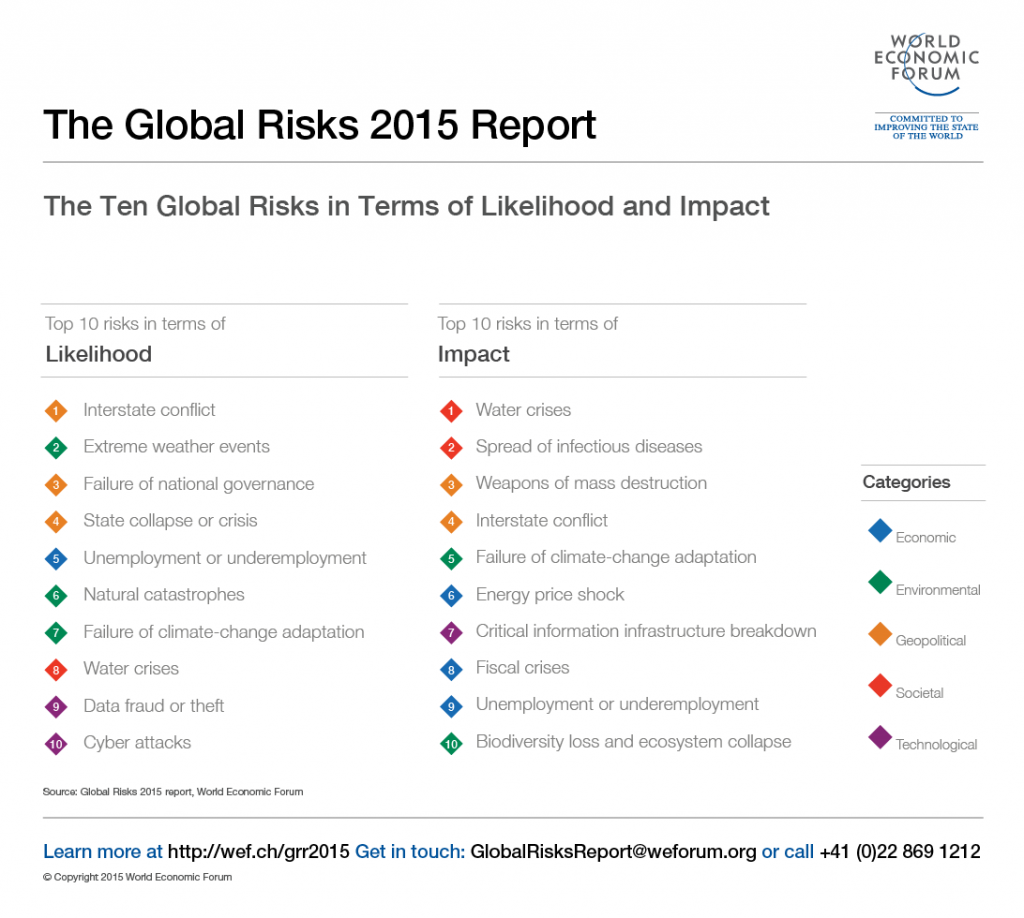 If you take the threat of conflict between states, the key global risk identified this year, there may also be reason to believe that some ongoing conflicts will de-escalate in the near future. After Japanese FDI in China dropped by 40% in early 2014, later that year the two countries started a process of rapprochement that could reduce tensions in the South China Sea.

What else does Global Risks 2015 tell us about other risks and trends we should be watching out for? One potentially explosive finding is that societies appear to be under increasing pressure from growing interdependence and the accelerating pace of change. As the reality is increasingly complex and economic pressures such as unemployment and income inequality rise, people identify themselves more strongly with familiar religious, cultural or national values.

Also, we should not let economic risks slip off the radar. Although experts see them as relatively less important this year, this is because environmental and geopolitical risks are taking centre stage. This could mean that less attention will be paid to economic risks, although much still needs to be done to ensure that the global economy grows in a sustainable manner.

The Global Risks series is not meant to act as a crystal ball. But it is meant to give leaders a heads up on what’s coming, to help them make sense of an increasingly complex reality and give them reasons to act.

Image: Visitors cast their shadows as they stroll at the ExCel arena during the London 2012 Olympic Games in London August 10, 2012. REUTERS/Murad Sezer

As part of it's new 5-year plan, China is expected to reduce its role as a major financier of coal-fired power plants, in favour of green tech investments.

The Cotoneaster franchetii is at least 20% more effective at soaking up pollution compared to other shrubs, according to a new report.

The world has lost one-third of its forests, but an end to deforestation is possible