How can we measure the impact of natural disasters?

Disaster-related damages are typically measured by separately examining the numbers of fatalities, injuries, and people otherwise affected – as well as the financial damage caused. This classification system dates back to a 1970s project at the Economic Commission for Latin America and the Caribbean (ECLAC 2003). Currently, EMDAT is the only public database on disaster costs with worldwide coverage (http://www.emdat.be). The EMDAT data is divided into mortality, morbidity, and financial losses; it is easy to notice that there is a stark difference between the trends indicated by each of these measures (http://www.emdat.be/natural-disasters-trends). This poses a problem for any attempt to characterise trends in disaster impact and – maybe more importantly – to use those trends to identify optimal policy choices. Trends in disaster losses are crucial because the distribution of losses across regions – and across countries at various levels of wealth and development – informs the discussion of climate change mitigation policies. These may include large international transfers of resources from the industrialised countries to poorer countries. A careful cost-benefit analysis of prevention and mitigation policies also necessitates a way to aggregate disaster losses.

We propose a novel way to aggregate measures of disaster impact. Our method is similar in some ways to that of the World Health Organization’s calculation of Disability Adjusted Lifeyears (DALYs) lost from the burden of diseases and injuries (WHO 2013). As in the WHO’s calculations of DALYs, our unit of measurement is also lifeyears. However, the DALYs measure the impact of diseases exclusively on health, while our measurement is aimed at accounting for the impact of disasters on human welfare more generally, including the impact through infrastructure and capital destruction.

The basic premise is that ethically, the value of human life should be considered as equal everywhere, while the value of monetary damages is not; a dollar lost in the highest-income country (Luxembourg) exerts less of an adverse impact on society than a dollar lost in the lowest-income country in our data (Somalia). The new index proposed here converts all damage indicators, including mortality, morbidity, and other impacts on human lives (e.g. displacement) – as well as damage to infrastructure and housing – into an aggregate measure of human lifeyears lost. In our approach we calculate the total years lost as the sum of years lost due to death, injury/affected, and financial damage.

Lifeyears lost due to mortality are calculated as the difference between the age at death and life expectancy. The cost in lifeyears associated with the people who were injured (or otherwise affected by the disaster) is assumed to be defined as a function of the degree of disability associated with being affected, multiplied by the duration of this disability (until an affected person returns to normality), times the number of people affected. This disability coefficient is the ‘welfare-reduction weight’ that is associated with being exposed to a disaster. Calculations here are based on a disability coefficient defined by the World Health Organization as “generic uncomplicated disease: anxiety about diagnosis” (e=0.054) and a three-year horizon for return to normality.

The last component of the index attempts to account for the number of human years lost as a result of the damage to capital assets and infrastructure — including residential and commercial buildings, public buildings, and other types of infrastructure, such as roads and water systems. We use the monetary amount of financial damages, and divide it by the monetary amount obtained in a full year of human effort. To proxy for this last quantity, we use income per capita as an indicator of the cost of human effort in each country-year, but discount this measure by 75%, as much of human activity is not spent in gainful employment.

The dataset and background papers — including more detailed information about the construction of the index, the calculations, and an interface to produce graphs and modify any of the assumptions described above are all available for download at https://sites.google.com/site/noyeconomics/research/natural-disasters.

The calculation of the total number of lifeyears lost worldwide during the whole period of observation (1980-2012), using the assumptions outlined above, results in a sum of 1,367 million lifeyears. This implies an annual average of almost 42 million lifeyears.

Figure 1 traces the evolution of the lifeyear loss following global disasters. We find no trend in the calculated index, and additionally we observe that most of disaster impacts are experienced in Asia (East and South). This dominance is likely due both to the region’s high degree of exposure to a multitude of extreme events (especially wide-scale flooding) and to the high population density in exposed areas (the coasts along the Pacific and Indian Oceans and the major river systems). 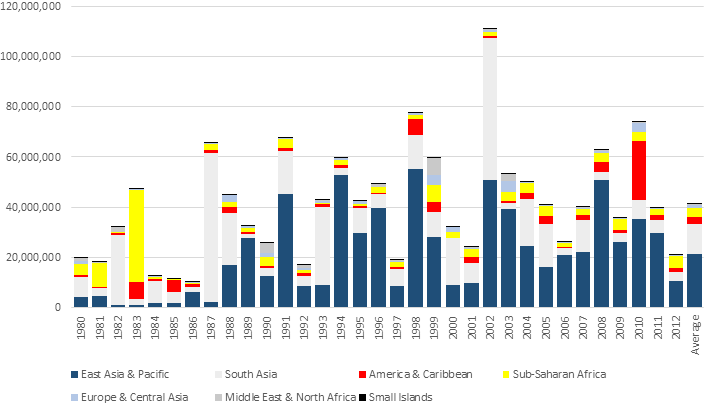 The index proposed here can also be constructed for individual events, rather than for annual country aggregates. Table 1 below, for example, shows the calculations for two significant events in 2011, the earthquake that hit Christchurch (New Zealand) and destroyed its downtown commercial centre early in the year, and the floods that affected much of the most populated area of Thailand around Bangkok in the second half of the year. When applying these calculations to specific events, more detailed information regarding the exact nature of the direct impacts can be included (e.g. the age at death profile).

The same index can also be constructed for individual countries in order to assess their disaster risk reduction (DRR) policy performance. Focusing on DRR was agreed on by United Nation’s member states in the Hyogo Framework for Action a decade ago, and the efficiency of DRR is likely to be further emphasised in the new framework agreement being renegotiated next week (March 14–18) at the UN World Conference on DRR in Sendai, Japan (UNISDR 2015).

In Figure 4, for example, we see the calculations for the disaster burden in the Philippines over the last few decades. One striking conclusion is that, despite increasingly aggressive and well-funded public policy commitment to invest in disaster risk reduction, there is an observable upward trend in disaster damages in the country. One plausible reason is that anthropogenic climate change has led to a change in the tracks of typhoons in the area, with storms increasingly affecting the South, an area that was previously less exposed, and is therefore less prepared.

The approach explored here has several attractive useful features, including:

The measure proposed here focuses exclusively on the direct impact of disasters. In addition, there are of course also significant socioeconomic impacts that are indirect. Such indirect impacts can potentially be long lasting so that the measure proposed here is likely underestimating the total burden of disasters worldwide (more discussion is available in Cavallo and Noy 2011, Noy 2012, and Meyer et al. 2013).

Author: Ilan Noy is an Associate Professor at the University of Hawaii and Victoria Business School, New Zealand.

Image: A woman prays in front of the Haiti cathedral, which was destroyed in the 2010 earthquake, in Port-au-Prince. REUTERS/Jorge Silva

More on Global Risks View all

Two UN experts outline five recommendations for how governments and the UN can change their approach to internal displacement.

Keeping global warming below 1.5C is still achievable, writes Christiana Figueres, and carbon offsets are a necessary part of the mix.

How flood-prone Mumbai is tackling climate change, from underground tunnels to newer sewers

How cities are preparing for more extreme weather