What is the future of electricity?

The electricity sector in OECD markets is undergoing tremendous change as it evolves to reduce carbon output and dependence on distant sources of fuel. These changes are creating many new businesses, from new types of power generation based on renewable sources (solar, wind, biomass) to new energy services that help consumers reduce and monitor their energy use. The changes also challenge traditional economics and so are affecting the viability of investment in some countries, especially in centralized power generation, transmission and distribution (see Figure 1).

Figure 1: The outlook for the viability of investment varies across the value chain 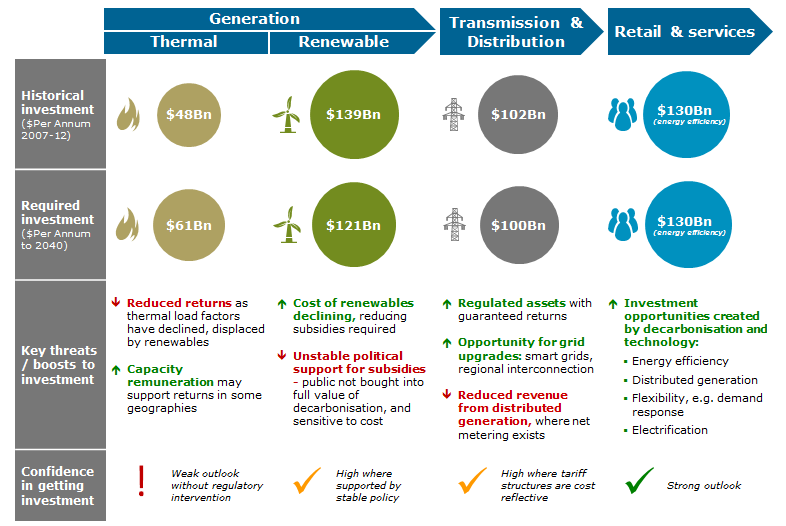 OECD countries have already spent a great deal of money on this evolution: about $3 trillion since 2000, according to the International Energy Agency. But they will need to spend much more – as much as another $8 trillion – over the next 25 years.

The changes, however, are disrupting well-established economic models for centralized generation, transmission and distribution of electricity. To raise the necessary capital for investments in long-term sustainability, the electricity sector must remain attractive for investors – existing and new.

Parts of the sector have become less attractive to investment in recent years, particularly in thermal power generation, where returns are declining. This turbulence has caused some of the largest utilities to re-examine the role of thermal generation in their portfolios, and some are getting out of that business or otherwise reducing their exposure to this part of the electricity value chain.

However, the sector as a whole will continue to depend on it. Non-hydro renewable power has grown rapidly (to about 9% of generation in OECD countries and about 15% in the EU) and more renewables are coming online. But even by 2040, forecasts predict that only about one-quarter of generation will come from non-hydro renewables – mostly solar, wind and biomass (see Figure 2).

Figure 2: Non-hydro renewables will provide about a quarter of OECD generation in 2040 under current policies 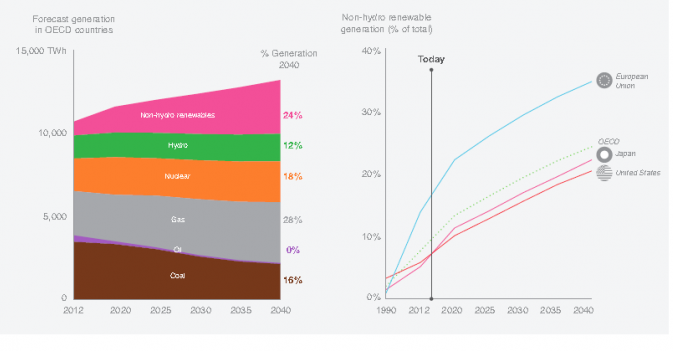 Returns have also declined for major renewables players. And while renewable technology costs are declining rapidly and investment rebounded for the first time since 2011, investor confidence is undermined by unstable political support for subsidies in some geographies and volatile fossil fuel prices that impact the relative attractiveness of alternative energy sources.

Policy-makers will play a key role in keeping the centralized power generation business viable during this transitional period. Among their most important contributions: they can help point industry towards the most efficient pathways to reach their objectives – for example, encouraging the most efficient technologies and locations of renewables, even across national borders, and promoting services that manage demand more efficiently. Policy-makers can also work to keep energy policies (including incentives and subsidies) stable – a prerequisite for long-term investment. One way to ensure stability is to nurture support for carbon-reduction goals across a broad swath of society so that voters, taxpayers and consumers maintain their commitment to change through the ups and downs of economic cycles.

Policy-makers and regulators also have a role to play in shaping the market so that it can send clear signals. Currently, electricity markets suffer from a lack of effective market mechanisms, particularly with regard to carbon pricing. The existing carbon pricing mechanisms are conceptually simple, but politically and practically complicated to implement. In particular, in Europe, the EU Emissions Trading System failed to deliver a carbon cost sufficient to drive adoption of renewable energy.

The power industry can also take “no regrets” actions to work for their continued viability, such as improving the efficiency of power plants by reducing external costs and seeking out new revenue sources. Some are investing to make plants more flexible, so they can keep them standing by and be ready to fire up when demand rises.

Downstream from power generation, the transmission and distribution (T&D) system – the grid – will require another $3 trillion of investment through 2040 in OECD countries. But the traditional economics of transmission and distribution have been disrupted by decentralized generation, which reduces the load on the grid, and by net metering, which allows customers to trade back the electricity they generate (through solar panels, for example) against the electricity they consume. Net metering provides an effective incentive for investment in decentralized generation, but it does not adequately reflect the value or cost of a grid connection. Grid operators need to work with regulators to find ways to keep the electrons flowing under these new conditions.

Across both generation and T&D, we may see a shift from rates based on the energy (for example, based on kilowatt hours), to models that recognize not only the electricity delivered but also the value of reliable generation capacity and the grid’s role as a backup for distributed energy systems – similar to bandwidth and fixed-line charges in the telecoms industry.

The part of the sector with a brighter outlook lies beyond the meter. New business and investment opportunities are emerging closer to customers, spurred by new technologies and customers’ evolving needs to reduce and manage their electricity consumption – and in some cases, electricity production. Smart meters and a wealth of new data about electricity usage create new possibilities for managing power consumption. Improved market design may include dynamic pricing that sets rates based on time of day or day of week, to encourage customers to use appliances when demand is lower. Government incentives and declining costs will make distributed generation attractive in more places. Further out, more electric vehicles and electric heat sources will create still more investment opportunities (see Figure 3).

Figure 3: The electricity value chain is evolving with new business and investment opportunities emerging beyond the meter 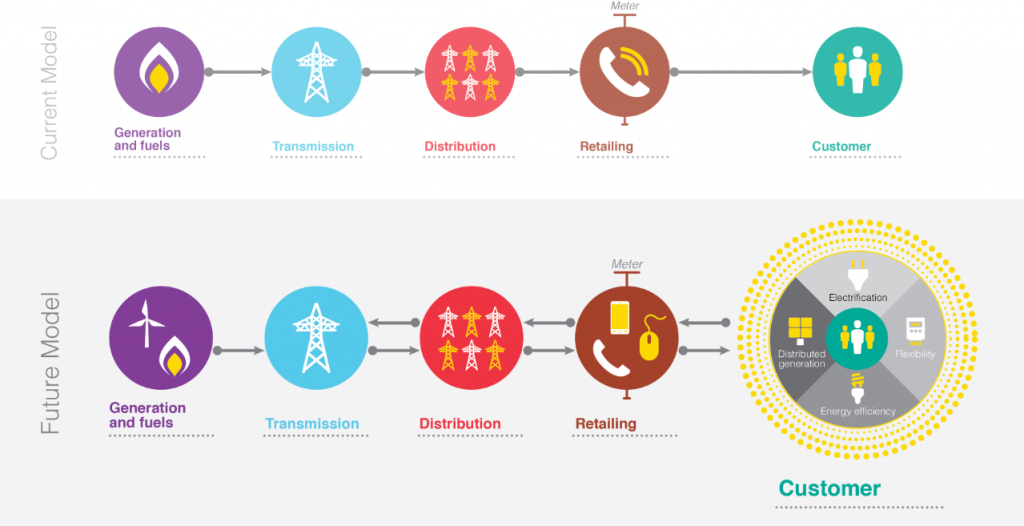 Looking ahead, the industry should closely watch certain issues:

The Future of Electricity, a report by the World Economic Forum in collaboration with Bain & Company, provides a more comprehensive perspective on the changes taking place in the electricity sector, the opportunities at hand and the barriers to necessary investment, including recommendations for policy-makers, regulators, businesses and investors.

Author: Roberto Bocca is the Head of Energy Industries at the World Economic Forum. Julian Critchlow is a Partner with Bain & Company in London.

This is part of the Future of Electricity project blog series.

Young people are acutely aware of the climate crisis, and willing to take action. But when it comes to making decisions, they lack a seat at the table