What’s the future of inequality?

What’s at stake: While Thomas Piketty’s documentation of the long-term evolution of income and wealth distributions is generally praised, the theoretical framework used to shed light on the future of inequality in the 21st century has recently been challenged by a number of authors.

Per Krusell and Anthony A. Smith writes that as the title of the book suggests, it makes predictions about the future. Piketty argues that future declines in economic growth – stemming from slowdowns in technology or drops in population growth – will likely lead to dramatic concentrations of economic and political power through the accumulation of capital (or wealth) by the very richest. Charles Jones writes that Capital in the 21st century proposes a framework for describing the underlying forces that affect inequality and wealth.

capital or wealth grows at the rate of return to capital

Lawrence Summers writes that Piketty makes a major contribution by putting forth a theory of natural economic evolution under capitalism. His argument is that capital or wealth grows at the rate of return to capital, a rate that normally exceeds the economic growth rate. Economies will thus tend to have ever-increasing ratios of wealth to income, barring huge disturbances like wars and depressions. This is the normal state of capitalism. The middle of the twentieth century, a period of unprecedented equality, was also marked by wrenching changes associated with the Great Depression, World War II, and the rise of government, making the period from 1914 to 1970 highly atypical.

Per Krusell and Anthony A. Smith writes that other things equal, higher values of r − g lead to thicker tails. The r − g theory argues that in models featuring multiplicative shocks to wealth accumulation, the right tail of the wealth distribution looks like a Pareto distribution with Pareto coefficient determined (in part) by r − g. The prediction of increasing inequality has its origins in falling rates of population and technology growth: were g to fall – and if r, in response, were to fall less than g – then the consequent increase in r − g would thicken the right tail of the wealth distribution. Alan J. Auerbach and Kevin Hassett write that the basic syllogism is (1) the rate of return exceeds the economic growth rate; (2) saving generated by this high rate of return causes capital and wealth to grow faster than the economy; and (3) capital income grows as a share of income because the rate of return does not fall sufficiently fast with capital deepening to offset this growing capital-output ratio.

The future of r and g

Thomas Piketty writes that, from a theoretical perspective, the effect of a decline in the growth rate g on the gap r − g is ambiguous: it could go either way, depending on how a change in g affects the long-run rate of return r. Generally speaking, a lower g, due either to a slowdown of population and/or productivity growth, tends to lead to a higher steady-state capital–output ratio β = K/Y, and therefore to lower rates of return to capital r (for given technology). The key question is whether the fall in r is smaller or larger than the fall in g. There are, in my view, good reasons to believe that r might fall less than the fall in g, but this issue is a complex one.

Brad DeLong writes that Piketty points to remarkable constancy in the rate of profit at between 4% and 5% per year, but is agnostic as to whether the cause is easy capital-labor substitution, rent-seeking by the rich, or social structure that sets that as the “fair” rate of profit.

the rate of return from capital probably declines over the long run, rather than remaining high

Free Exchange writes that the rate of return from capital probably declines over the long run, rather than remaining high, due to the law of diminishing marginal returns. Modern forms of capital, such as software, depreciate faster in value than equipment did in the past: a giant metal press might have a working life of decades while a new piece of database-management software will be obsolete in a few years at most. This means that although gross returns from wealth may well be rising, they may not necessarily be growing in net terms, since a large share of the gains that flow to owners of capital must be reinvested.

The elasticity of substitution between capital and labor

Nick Bunker writes that for capital returns to be consistently higher than the overall growth of the economy—or “r > g” as framed by Piketty—an economy needs to be able to easily substitute capital such as machinery or robots for labor. In the terminology of economics this is called the elasticity of substitution between capital and labor, which needs to be greater than 1 for r to be consistently higher than g.

Lawrence Summers writes that as capital accumulates, the incremental return on an additional unit of capital declines. the rate of return from capital probably declines over the long run, rather than remaining high. With 1 percent more capital and the same amount of everything else, does the return to a unit of capital relative to a unit of labor decline by more or less than 1 percent? If, as Piketty assumes, it declines by less than 1 percent, the share of income going to capital rises. If, on the other hand, it declines by more than 1 percent, the share of capital falls.

Lawrence Summers writes that Piketty misreads the literature on the elasticity of substitution by conflating gross and net returns to capital. It is plausible that as the capital stock grows, the increment of output produced declines slowly, but there can be no question that depreciation increases proportionally. And it is the return net of depreciation that is relevant for capital accumulation. I know of no study suggesting that measuring output in net terms, the elasticity of substitution is greater than 1, and I know of quite a few suggesting the contrary.

Matt Rognlie writes that Piketty does not cover the distinction between net and gross elasticities. This is problematic, because net elasticities are mechanically much lower than gross ones, and the relevant empirical literature uses gross concepts. The vast majority of estimates in this literature, in fact, imply net elasticities less than 1 – well below the levels needed by Piketty as suggested by the graph below. 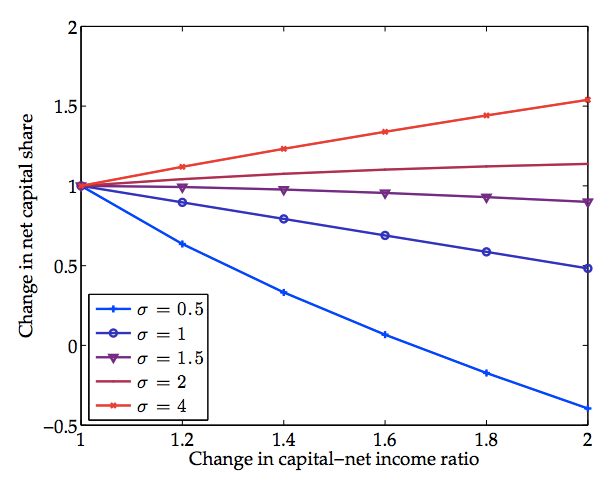 Image: U.S. one dollar bills blow near the Andalusian capital of Seville in this photo illustration taken on November 16, 2014. REUTERS/Marcelo Del Pozo.

Women who make goods like clothing and street food in slum homes are producing less amid high temperatures and floods, hurting their fragile livelihoods.