Will Greece run out of cash?

An expert explains: How COVID-19 exposed the fragility of global supply chains

For many weeks now it has been regularly reported that Greece will run out of money if an agreement is not reached with the official lenders in the next few days. So far this has not happened.

Given the huge stock of financial assets the Greek government has, I am always cautious about reports that it will soon  run out of cash.  At the end of September 2014, the Greek government had assets worth €86.6 billion (Table 1). The data is unfortunately outdated, and assets have most likely been depleted significantly during the past six months.  Some of the deposits are earmarked for banking issues. It may be difficult to sell some of the equity holdings, in particular bank shares.

Still, even if the €86.6 billion has declined by a dozen or two, and even if not all of the remaining assets could be easily used to pay for obligations, there is still a lot, and much more than the €30 billion assets the Greek general government had at the end of 1997 (Figure 1). As a share of financial assets in GDP, Greece ranked seventh among the 28 EU countries in September 2014 (Figure 2), so asset holdings were relatively high in a European comparison too.

Greece has looming repayment deadlines: as Silvia Merler recently showed, Greece has to repay €6.7 billion to the ECB and €9.8 billion to the IMF in 2015. (There are also maturing treasury bills, but these are rolled over by the largely state-owned Greek banks). Greece also has to pay some interest on its liabilities, though not that much, because interest payments on EFSF loans (the largest creditor of the country) are deferred (see my earlier post on Greek interest payments here).

The question is therefore whether the primary budget surplus and the possible liquidation of some financial assets would be sufficient for the Greek government to carry on paying financial obligations until an agreement is reached with the creditors in the coming weeks or months. My guess is yes, at least perhaps till the summer, when large repayment will become due. 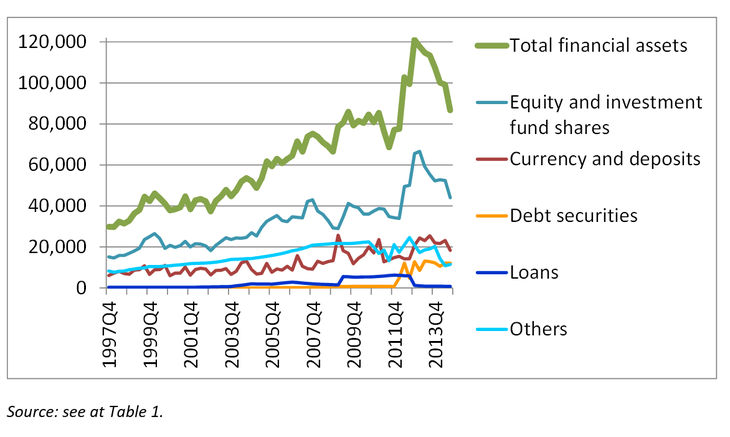 Author:Zsolt Darvas is a Senior fellow at Bruegel.

Image: A Greek and a European Union flag fly outside the Bank of Greece in Athens.  REUTERS/John kolesidis.

New research shows the impact the pandemic has had on Europe's younger generation, with women most affected.

For the strongest pandemic recovery, the IMF advises policy support and interventions continue for those most affected, in a 'gradual and cautious' approach.