Why extroverts earn more than introverts

When you look at the average salaries of different personality types, one overarching theme emerges: Extroverts tend to earn more than introverts.

In a report on career achievement and personality type, Truity Psychometrics found that extroverts dominate the high-earning end of the spectrum. The two top-earning personality types are ESTJ (which stands for Extroverted Sensing Thinking Judging) and ENTJ (Extroverted Intuitive Thinking Judging). They make average annual salaries of $77,000 and $76,000, respectively. 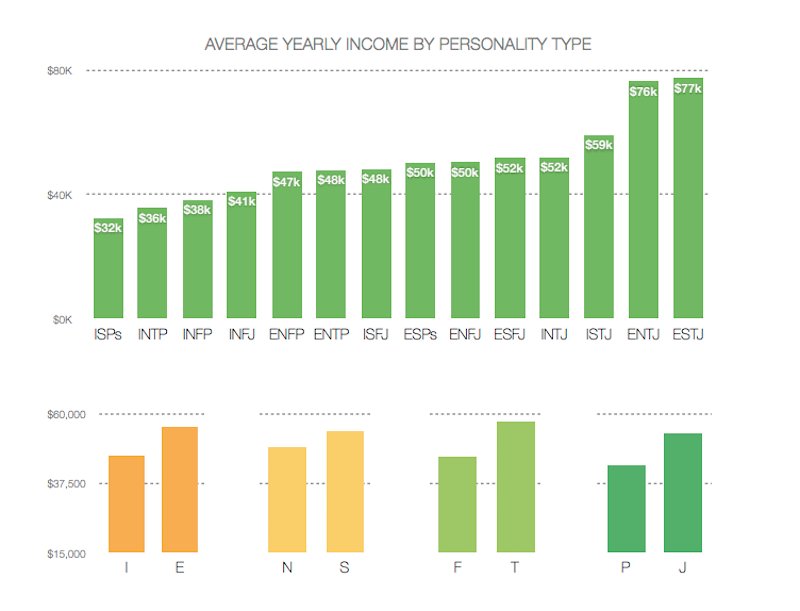 To Susan Cain, author of “Quiet: The Power of Introverts in a World That Can’t Stop Talking,” these findings aren’t especially surprising.

“Extroverts are routinely chosen for leadership positions and introverts are looked over, even though introverts often deliver better outcomes,” Cain tells Business Insider. “They’re not perceived as leadership material.”

In her book, Cain explains that introverts are typically more skilled than extroverts in situations where they have to manage a group of initiative-takers. That’s because introverts make time to listen to other people’s suggestions. The problem is that most people assume extroverts will be more effective leaders simply because they’re more talkative — and therefore don’t always consider introverts for high-paying, top positions.

Cain also suggests that introverts earn less because they tend to be less driven by financial rewards like a high salary. Instead, she says they’re generally attracted to jobs that provide them with a deeper sense of meaning — like research positions and careers in the arts.

None of these ideas imply that introverts can’t take actions to advance their career or boost their earning power. If you’re an introvert who wants to manage people but isn’t getting tapped for those lucrative leadership roles, Cain suggests sitting down with your boss to discuss where you want to be in your career.

“Your boss may have no idea that that’s what you want,” she says.

It’s also important to draw attention to your contributions in ways that feel natural. Many introverts find the prospect of self-promoting “distasteful,” Cain says. Instead, they can share articles or give presentations to colleagues to highlight what they’ve been working on.

In some cases, however, introverts may find their careers have stagnated simply because they don’t want to get promoted to management. If that’s you, it may be time to reassess whether you’re working at the right company and even in the right career. If you’d like to stay at your current organization, is there a different path to advancement you can take?

Of course, making the decision to eschew a promotion and salary bump or even switch fields is no easy feat.

“There’s so much pressure to be the one who’s in charge of everyone,” Cain says. “It takes self-awareness and personal integrity to live life on the terms you want to live it on.”

As for the future, Cain suspects that the bias toward extroverts in the workplace (and the income disparity between extroverts and introverts) will gradually disappear as more people learn what introverts have to offer.

“The hunger for and receptivity to these ideas is profound,” she says.

Author: Shana Lebowitz is a Strategy reporter for Business Insider.

Image: Businessmen and visitors enjoy the good weather on the stairs under the Arche de la Defense in the financial district of la Defense near. REUTERS/Charles Platiau

Governments and businesses can collaborate to build online business platforms to improve citizen services in areas like healthcare, employment and education.

Investing in young 'ecopreneurs' is key to our planet's future. These solutions show the power of a tech-savvy generation eager to bring about real change.

Want to be better at problem-solving? Tap into these ‘mental models’