How should India approach the forthcoming and highly anticipated climate change negotiations planned for December in Paris (COP-21 as it is formally called)? The answer is confidently and constructively based on a series of domestic green actions that contrast, at least in one key area, with regressive inaction by advanced countries.

Efforts to deal with climate change have suffered a setback recently because of the large (about 35 – 40%) decline in international energy prices. But that setback need not have occurred had governments taken offsetting actions to impose taxes on petroleum products. How have the major governments fared on this score? The table below highlights a striking difference between the responses of advanced countries and those of India. The former have reduced taxes while India has increased them substantially.  Essentially, advanced countries have stood by passively, passing on the benefits of price reductions to consumers and producers.

One surprise is the lack of outrage by international greens at this non-action on the part of advanced countries. One should also not be overly impressed by recent arguments (made, for example, by the IMF) that the decline in energy prices is an opportune time for advanced countries to impose carbon taxes. The fact is that such taxes were called for even when oil prices were above $US100 per barrel, so that imposing them at US$US60 per barrel is only a partial and inadequate catch-up.

* For India and China, data for March 2015 is taken from Dec 2014; for India taxes since then have not changed

While the advanced countries have not exactly covered themselves in glory, India has taken a number of positive actions to further address climate change. Consider a few.

First, reflecting the developments noted in Table 1, the government increased the excise duty on petrol and diesel, passing on only about one-third of the benefit of declining prices to consumers. As a result, on petroleum products, India has moved from a carbon subsidisation regime to one of significant carbon taxation  – from a negative price to a positive price on carbon emissions.  And the shift has been large.

For example, according to calculations from the Economic Survey by Muthukumar Mani and Fang Zhang of the World Bank, the effect of the recent actions has increased the carbon tax by nearly $60 per tonne of CO2 in the case of petrol, and nearly $42 per tonne in the case of diesel. In absolute terms, the implicit carbon tax ($140 for petrol and $64 for diesel) is substantially above what is now considered a reasonable initial tax on CO2 emissions – $25 per tonne (see Figure 1). Calculating the CO2 emission reduction from the measures taken for petrol and diesel suggests that there will be a net reduction of 11 million tonnes of CO2 emissions in less than a year; 0.6% of India’s annual emissions compared to the baseline. 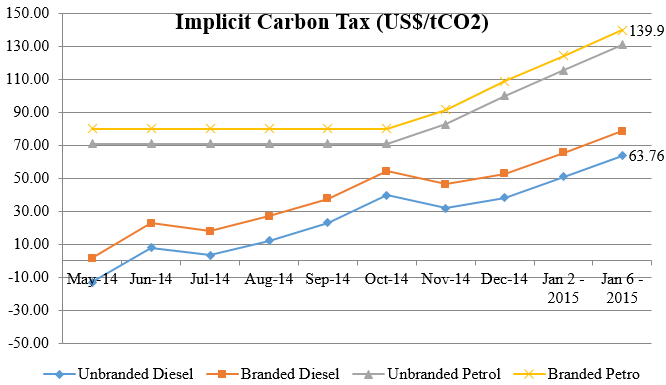 Second, the coal cess has quadrupled from Rs. 50 per tonne to Rs. 200 per tonne. This has resulted in an implicit carbon tax of $US2 per tonne of CO2 on domestic coal and a carbon tax of $US1.4 per tonne of CO2 on imported coal. This may of course still not be enough and cleaning coal may require more domestic action by  way of stricter regulation and enforcement. For example, the health cost of coal for power generation alone in India is estimated to range from $3.41 per tonne to $51.11 per tonne (depending on the value of statistical life), which is well above the current tax on coal.

Fourth, the PM has announced an ambitious plan for ramping up the solar effort from 20 gigawatts to 100 gigawatts by 2025.

Fifth, despite the considerable costs that will be inflicted on domestic industry and eventually on consumers, the government has committed to phasing out HCFCs, a toxic source of greenhouse emissions.

Finally, and perhaps most encouraging from a medium-term perspective, pollution-related issues are becoming part of the domestic discourse and potentially a staple of the politics of outrage. The series on air pollution carried by The Indian Express, and the release by the PM recently of monitoring mechanisms for pollution in a number of cities are significant in this regard. The pressure on governments to respond to this bottom-up pressure is only likely to increase over time. While the issues are local and domestic, there will be positive international spillovers relating to climate change. The time is not far off when carbon taxes to offset the domestic social marginal costs of carbon-related pollution – health, accidents, and congestion – can be envisaged that will have positive global benefits.

Against this background of solidly green actions, how should India approach Paris? For a start, India – especially with a new PM – can credibly repudiate its past perceived image as a recalcitrant negotiator, focused on asking others to contribute without offering contributions of its own. India’s green actions should be the starting point and the basis both for what India could be willing to offer at Paris, and what it must seek of advanced countries.

At the end of the classic movie Casablanca, the soon-to-be-separated protagonists console themselves with the thought that after all “we’ll always have Paris.” For India and the world, Paris can be a good memory – India is doing a lot and can hence offer a lot to make COP-21 successful, but so too must its partners. India should shape the conversation leading up to Paris, above all by highlighting its domestic actions, so that the world doesn’t just ask what India can do to make Paris successful, but also asks what others can do, and above all, begins by asking what the others have not yet done.

Author: Arvind Subramanian is a Chief Economic Advisor to the Government of India.

Arvind Subramanian, Chief Economic Adviser to the Government of India, Ministry of Finance of India

Population and economic growth are straining Texas' water supplies to the limit. How will the state find an extra 10 trillion litres of water a year by 2070?

36 million urban trees die each year in the United States. Reforestation hubs can save trees from landfill and repurpose them for furniture or flooring.

How to get private capital to protect nature – without greenwashing

There is definitely water on the moon, according to NASA. Here's what this means

As Canada bans bags and more, this is what’s happening with single-use plastics around the world