Some 2,300 years ago, Aristotle posited that the pursuit of happiness and the avoidance of pain “…is a first principle; for it is for the sake of this that we do all that we do”.

In other words, happiness is what we value and everything else, including health and material wellbeing, is valued only to the extent that it makes us happy and helps us to avoid pain. While subjective wellbeing is positively correlated with material wellbeing in the short run (Deaton 2013, Di Tella et al. 2003, Stevenson and Wolfers 2008) a fundamental question arises as to whether the colossal improvement in material conditions that has occurred since the time of Aristotle has made human beings substantially happier or not. If happiness monotonically increases with development, then the enhancement of material wellbeing should have made human beings many orders of magnitude happier today than they were at the time of Aristotle. Existing evidence indicates, however, that happiness has not really increased over time (Easterlin 1974), suggesting that considerable adaptation has taken place.

We get used to the good things

The hedonic adaptation hypothesis is that there is a psychological process that attenuates the long-term emotional impact of a favourable or unfavourable change in circumstances, such that people’s level of happiness eventually returns to a stable reference level (Frederick and Lowenstein 1999). According to the hedonic adaptation hypothesis, then, variations in happiness and unhappiness are merely short-lived reactions to changes in people’s circumstances. In other words, while people initially have strong reactions to events that change their material level of wellbeing, they eventually return to a baseline level of life satisfaction that is determined by their inborn temperament (Diener et al. 2006). In psychology, this idea is known as the set point theory and was labelled the hedonic treadmill in the seminal work of Brickman and Campbell (1971).

Frederick and Lowenstein (1999) hypothesised that people do not adapt to shocks in terms of basic necessities that are related to survival and reproduction. This suggests that hedonic adaptation is manifested the most in people who have achieved a certain level of basic material wellbeing rather than being a persistent phenomenon that is evenly distributed across all socioeconomic groups. The idea is analogous to the notion of diminishing marginal utility, where the marginal increase in happiness derived from material gain is higher at lower levels of material wealth. The analog in hedonic adaptation is that adaption is more limited at lower levels of material wealth. In essence, then, the idea is that the happiness levels of the poor do not adapt, or do not adapt completely, to shocks in terms of basic necessities.

In a recent paper (Galiani et al. 2015), we present the first piece of experimental evidence on hedonic adaptation among the poor to improvements in the satisfaction of their basic necessities, specifically shelter. We use data on subjective perceptions of wellbeing generated by a large-scale, multi-country randomised field experiments that provided inexpensive, basic housing units to extremely poor populations living in slums in three Latin American countries – El Salvador, Mexico and Uruguay.

The houses were supplied by TECHO, a Latin American NGO whose mission is to provide basic, pre-fabricated houses to extremely poor populations with the express goal of improving their wellbeing. TECHO targets the poorest informal settlements and, within these settlements, the families who live in the most extremely substandard housing. TECHO houses are a significant improvement over existing housing in terms of flooring, roofs and walls (see Galiani et al. 2015). The targeted settlements are plagued by a host of problems, including insufficient access to basic utilities (water, electricity and sanitation), significant levels of soil and water contamination, and overcrowding. Typically, houses are rudimentary units constructed from discarded materials, such as cardboard, tin and plastic, and have dirt floors.

TECHO houses are 18 square meters (6m by 3m) in size. The walls are made of pre-fabricated, insulated pinewood panels or aluminium, and the roofs are made of tin and are designed to keep occupants warm and to protect them from humidity, insects and rain. The floors are raised between 30 and 80 cm off the ground to reduce dampness and to protect the occupants from floods and infestations. Although these houses are a major improvement over the recipients’ previous housing, the facilities are limited in that they do not include bathrooms or kitchens or amenities such as plumbing, drinking water hook-ups, or gas connections. The houses cost less than $1,000, and the beneficiary families contribute 10% of that amount. In El Salvador, this is approximately equivalent to three months’ earnings, while in Mexico and Uruguay, it is roughly equivalent to 1.4 months’ earnings. The following pictures show examples of the types of houses being provided.

We test the hedonic adaptation hypothesis using experimentally generated variations in the supply of TECHO houses combined with quasi-experimental variations in the length of exposure to the treatment. We find that subjective perceptions of wellbeing improve substantially 16 months upon receipt of improved housing, but that, eight months later, about 60% of that gain disappears. Indeed, if you look at the Figure 1 below, we see that the hedonic adaptation is consistent across different satisfaction indicators, from satisfaction with quality of life to satisfaction with quality of housing characteristics. 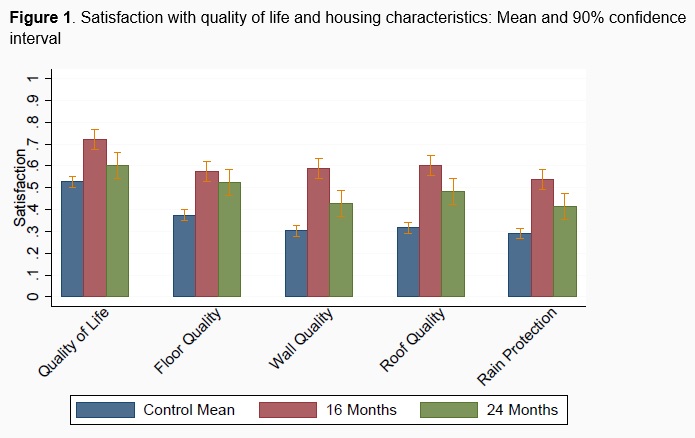 Thus, our results show that at least a partial degree of hedonic adaptation is a common human behaviour that is present even among the extremely poor who experience a major improvement in the level of satisfaction of their basic necessities.

Image: People walk across a street in Tokyo July 12, 2009. REUTERS/Stringer