Take Finland. Its schools are among the best in the world, its government is among the least corrupt, and, for rich countries, its public debt is among the lowest. But despite the fact that the fundamentals of its economy are strong, its economy is not, in fact, strong. Finland is actually stuck in its longest recession in living memory. Why? Well, the short story is the euro.

The slightly longer version is Finland has had some bad luck that the euro has turned into a bad recession, or at least a worse one that it had to be. It started when Apple made Nokia go from being synonymous with smartphones to being synonymous withold smartphones. As Finland found out, it isn’t easy to replace a company that, at its peak, made up 4 percent of your economy. Obsolescence came for the timber companies next. There was nothing they could do to make people need as much paper, which until now had been a major export, in a post-paper world. And, on top of that, Finland has felt the effects of Russia, one of its biggest trading partners, staggering under the weight of low oil prices and Western sanctions. Put it all together, and Finland was always going to have a tough time. But it’s been tougher than it needed to be, since Finland hasn’t been able to do what a country would normally do in this situation: devalue its currency. That’s because Finland doesn’t have a currency to devalue. It has the euro.

But how would a cheaper currency return Nokia to relevancy? Well, it wouldn’t. What it would do, though, is make the rest of Finland’s economy competitive enough that things that aren’t strengths today would become ones tomorrow. It would also keep inflation from falling too much—it’s actually negative now—which, in turn, would make debts a little easier to pay back and keep households spending and businesses investing a little more. Think about it like this. Anytime a shock hits, whether that’s banks failing or an industry dying, the economy needs to cut costs to regain competitiveness. There are only two ways to do that: cut the value of the currency so wages aren’t worth as much, or cut wages themselves. Now, this might sound like a distinction without a difference, but it’s not. It’s a lot easier to cut one price (the exchange rate) than it is to cut millions of prices (people’s wages). And it’s a lot less painful, too. You don’t have to fire anyone to devalue the currency, but you do to make people take pay cuts.

Here’s where things get tricky, though. How much should we blame the euro for Finland’s problems, and how much we should blame, well, the problems themselves. After all, it’s not like the common currency had anything to do with the iPhone turning Nokia’s flip phones into little more than cultural artifacts. Although, on the other hand, it has had something to do with how long it’s taken Finland to adjust to this new reality. There’s no easy answer here. But what we can do, as Paul Krugman points out, is compare how Finland has done to a similar country that doesn’t use the euro—a country like Sweden. And that, as you can see below, is a pretty ugly picture. Finland and Sweden grew almost identical amounts between 1989 and 2008, before diverging 20 percent since then. The fairest conclusion is that, given that so much has befallen it, Finland would have fallen behind even if it’d kept its old currency, the markka, but that it’s fallen even more than that because the euro has taken away its ability to do anything about everything that has happened to it. All it can do is try to cut costs ever more religiously. 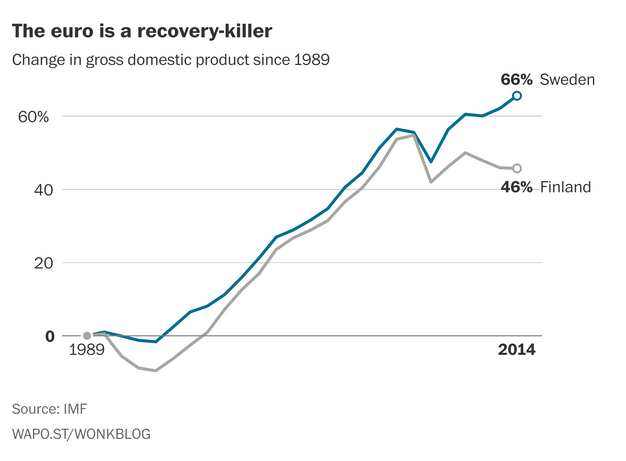 But facts are no match for faith, and Finland has plenty of that in its economic strategy. Finnish finance minister Alexander Stubb told the New York Times’ Neil Irwin that “devaluation is a little like doping in sports” in that “it gives you a short-term boost, but in the long run, it’s not beneficial.”  The problem is that although this sounds like a cost-benefit analysis, it’s more a moral one. It’s really pooh-poohing devaluation as the easy way out. But why shouldn’t we want that? The two best things about the easy way out are that it’s easy and is, in fact, a way out. Finland could use one of those given that its economy is still 5 percent smaller than it was in 2008.

The only way the euro could possibly be worth it is if it helped Finland more before the crash than it’s hurt Finland since. That’s a hard case to make, though, considering that Sweden did just as well without the euro as Finland did with it during that time.

Bad things have always happened to good economies, and they always will. Such are the vicissitudes of life. That’s not fair, but at least governments can make it a little more so by doing something about it—unless, of course, they’re part of the euro. Then their only recourse is punishing themselves again and again and again.

Morale still hasn’t improved. Neither has the economy.

This article is published in collaboration with Wonkblog. Publication does not imply endorsement of views by the World Economic Forum.

Author: Matt O’Brien is a reporter at the Washington Post.

Image: General view of Finland’s museum of modern art, ‘Kiasma’ , May 27 in Helsinki with the House of Paliament in the background. REUTERS.

New research shows the impact the pandemic has had on Europe's younger generation, with women most affected.

The floods in Europe show infrastructure is vital alongside the EU's climate change plans that involve reducing emissions and boosting economic resilience.