Why faith communities are essential disruptors

Faith communities are extreme disruptors. The Protestant Reformation in 16th-century Europe was, itself, an incredible period of religious innovation – traditional preconceptions about God were swept away by new ideas based on individual access to the Divine, availability of information, and rejection of corruption.

This movement spilled over into political and economic life, igniting the Thirty Years War that reshaped a modern Europe. Likewise, the movement to abolish slavery in the United States grew largely out of religious communities seeking to disrupt a practice they viewed as immoral and definitively evil. Their fervour and commitment eventually led to the establishment of political organizations that upended social and economic traditions and the unity of the country for a number of years. More recently, faith communities have assembled to fight xenophobia across South Africa, exploitative natural resource extraction in Latin America, and climate injustice at the 2014 UN General Assembly in New York and beyond. They have done so in ways that challenge the status quo and seek to change fundamentally traditional economic, social and political models.

These instances demonstrate the power of innovative beliefs to shift future economic, political and social landscapes. Beliefs, often tied to a faith tradition, can inspire prolonged action towards ideals and dogged pursuit of improved realities. They can also result in violence and unrest for many years or decades. Particularly as global demographics around religious affiliation alter, the significance that religion plays in shaping agendas and mobilizing action should not be overlooked.

Recently published research projects that the numbers of religiously unaffiliated people in Europe and North America will increase by 16% and 88%, respectively, from 2010 to 2050. Meanwhile, religious affiliation in the rest of the world will continue to grow significantly. This could imply that faith communities no longer drive innovation to the same degree in the West, whereas faith-associated economic, social and political movements carry on disrupting the status quo in other parts of the world. Contemporary examples range from progressive and positive disruptions, such as the call to action for a more human-centred economy in the Pope’s recent Encyclical, to detrimental and terrifying ones, such as the emergence of ISIS.

Yet, while religious voices may not be as widely heard as they once were in the West, they will likely continue bravely to run against the grain in the pursuit of social justice ideals and influence their communities to think differently. This trend has seen Europe’s most senior rabbi defend Muslim women’s right to wear a niqab in the name of religious freedom. It is also seen when pastors come together to demand that police officers in Miami use their faces for target shooting instead of mugshots of apprehended, racialized teens. Despite waning religiosity in the West, research from the Brookings Institute suggests that faith communities and faith leaders will remain essential to movements on behalf of the poor, the marginalized and the middle class, no matter the extent of the broader population’s religious affiliation. Indeed, faith institutions retain greater public trust in many parts of the world, which connotes a greater potential for influencing behaviours and ideas (see the Gallup graph of Confidence in Institutions below). They also arouse collective action in ways few organizations can. 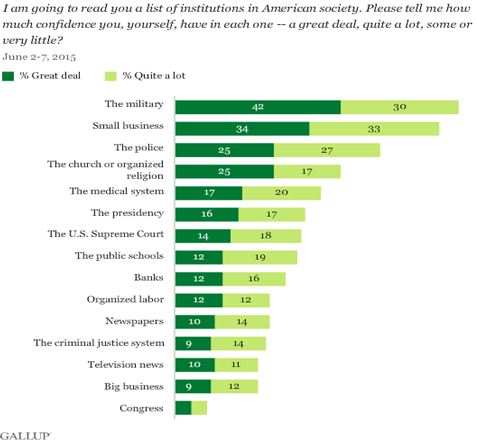 With this in mind, it is imperative for political, business and civil society leaders to build effective public-private cooperation with faith communities. Faith communities will remain important engines of social change and innovation, and public and private actors should seek to leverage them. Whether these communities drive towards progressive and positive goals or detrimental and terrifying ones, however, will be determined by the ability of leaders from across sectors and regions to develop a sensitized and inclusive approach to engaging people of all types of beliefs and worldviews in their conceptions of a global political, economic and social future. To do so, greater awareness and appreciation for religious literacy, a deeper understanding of the motivations of religiously affiliated individuals and religion’s impact on global trends is critical.

Image: The Christian crosses of a Beirut cathedral surround a minaret of al Amin mosque in Beirut. REUTERS/Eric Gaillard