A growing number of policymakers see financial inclusion—greater access to financial services throughout a country’s population—as a way to promote and make economic development work for society. More than 60 countries have adopted national financial inclusion targets and strategies. Opening bank accounts for all in India and encouraging mobile payments platforms in Peru are just two examples. Evidence for individuals and firms suggests that greater access to financial services indeed makes a difference in investment, food security, health outcomes, and other aspects of daily life. Our study looks at the benefits to the economy as a whole.

We find there are economic benefits to greater financial inclusion, up to a point, and countries need high quality banking supervision when they broaden access to credit.

Our study  examines the macroeconomic dimension of financial inclusion using comprehensive global data from the Financial Access Survey, Global Findex, and other new datasets. The results suggest that there are tangible economic benefits, such as higher GDP growth from expanding financial inclusion.

Looking at the data, what does financial inclusions’s  track record  tell us?

The world has seen improvements in financial inclusion, but considerable gaps remain. The percentage of adults with bank accounts increased from 50 to about 60 percent worldwide between 2011 and 2014.  However, some two billion adults remain “unbanked”. Furthermore, out of the banked population, almost 40 percent do not effectively use their accounts, either to make deposits or withdraw money.

These trends mask persistently large differences across countries, regions, individuals, and firms. While inclusion is high in Organization for Economic Cooperation and Development countries, with a banked population of over 90 percent, it is markedly lower in developing countries, at 54 percent, and particularly so in South Asia and the Middle East.

We provide new data underscoring that the gender gaps are even larger in bank leadership and supervision than they are on the user side of financial services. Women hold less than 20 percent of bank board seats and represent less than two percent of bank CEOs. The share of women in banking supervisory boards is also low, at about 17 percent on average.

Impacts on growth, stability, and inequality

Our analysis finds that the various types of access—accounts, credit, infrastructure, women users, low-income—improve economic growth, but up to a point. These growth benefits are in addition to those derived from increasing financial depth. Earlier studies have found—with some qualifications—that countries have achieved higher growth rates with deeper financial systems. Our analysis shows that financial inclusion provides an additional growth boost once depth is accounted for. However, the benefits fall as both financial access and depth become large.

Our study also shows that the effects on financial stability of broadening access to credit depend on the quality of a country’s financial supervision. We assess the quality by taking country scores on the Basel Core Principles of Banking Supervision, assessed in the IMF-World Bank Financial Sector Assessment Programs. When supervision is of high quality, broadening credit access leads to an increase in financial stability, as the banking sector builds up healthy capital and profit buffers. When supervision is of low quality, these buffers decline as credit access broadens (see figure). These results hold for economic stability as well. This presents a dual challenge for many countries, since we also find that supervisory quality tends to be deficient precisely in countries where financial inclusion is most lacking. 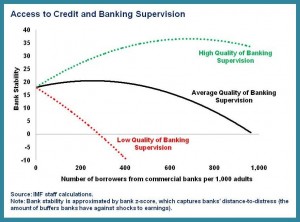 In contrast to credit access, financial stability does not significantly deteriorate with other forms of financial inclusion, such as access to bank accounts, branches, and ATMs. Our results suggest that countries can expand these services without impeding financial stability.

We also find that gaps in financial inclusion are associated with economic inequality, but the association appears relatively weak.

In a nutshell, financial inclusion can help achieve several macroeconomic goals. However, there are limits to what it can do, and its benefits diminish as both financial access and depth become large. In particular, broadening access to credit can compromise stability if supervision is weak.