How different age groups identify with their generational labels

Pew Research Center recently posted a study on how strongly different generations identify with their generational labels. While Baby Boomers and Gen X-ers tend to place themselves in their respective groups, most millennials and members of the silent generation do not.

The results were mixed: 58% of Gen-Xers identified as such, and a full 79% of boomers classified themselves that way. Meanwhile, just 40% of millennials identify as millennials, and only 18% of the silent generation self identified: 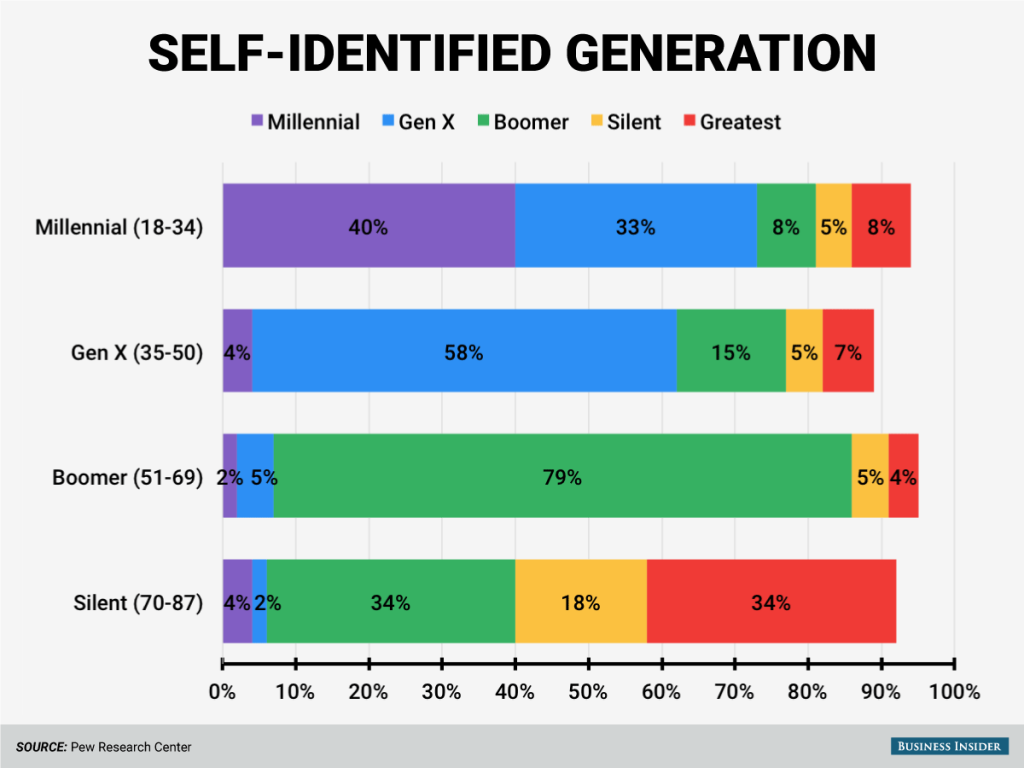 Pew noted that many older millennials — those above the age of 27 — identified more with Gen X than with other millennials.

The study points out some of the limits of looking at generations: The cutoff lines between one generation and another are somewhat arbitrary, and multi-decade age cohorts are not really monolithic entities with one particular identity or another.

Millennials view their generation as self-absorbed

Pew noted that millennials were more likely to use negative terms to describe their generation than the other age cohorts, and less likely to agree with the positive descriptions.

Here are the percentages of millennials who agreed that different traits described their generation. Generally positive or neutral traits are in blue; generally negative traits are in red:

Drawn from around the globe and with a shared purpose to ensure a sustainable recovery from COVID-19, here are the 2020 Social Innovators of the Year.

The innovations tackle a range of challenges, from making healthcare more accessible to increasing the inclusivity of the labour market post-COVID-19.

Social entrepreneurs and COVID-19: stories from the frontline

Are you ready for what systemic change means?

Two rhythms and a sharpened pencil: how art can help us heal and make sense of the world