The global workforce has begun a significant transition away from full-time salaried jobs and towards a variety of flexible forms of employment, independent businesses of one, freelance work, and other forms of on-demand labour. This shift accompanies the coming of age of crowd-based capitalism and the maturing of new “sharing economy” models of organizing economic activity, like those pioneered by Airbnb, Uber, Etsy and TaskRabbit.

As the on-demand workforce becomes a larger part of modern economies around the world, there are two visions of how this will play out. One portrays a future of empowered microentrepreneurs, individuals who take control of their own destinies on an unprecedented scale, working fewer hours with more flexible schedules, striking a better work-life balance, earning money doing work they enjoy while creating an array of innovative new products and services. The other foresees a dystopian world of disenfranchised workers, a race to the bottom in which work will be defined by low wages, high levels of job insecurity, and the elimination of income stability, labour benefits and an adequate social safety net.

Which of these futures is more likely? My ongoing research with Professor Marios Kokkodis of Boston College provides an early leading indicator. We have been monitoring hourly wage rates for over 10,000 workers across a range of different occupations on a popular US-based online labour platform, comparing these to the corresponding levels documented by the US Bureau of Labor Statistics. As of summer 2015, average on-demand wage rates remain higher, even after accounting for marketplace fees and differences in wage levels by geography and by profession. Put differently, you can generally expect to earn more per hour getting your freelance work through a digital labour market than by seeking it through traditional channels, even after you pay the platform its commission.

A closer look at the data, however, suggests that this on-demand wage premium is not uniform across occupations. As illustrated below for a sample of the most frequently listed occupations, while many have higher wage rates, workers in others are making significantly less per hour than the national averages. 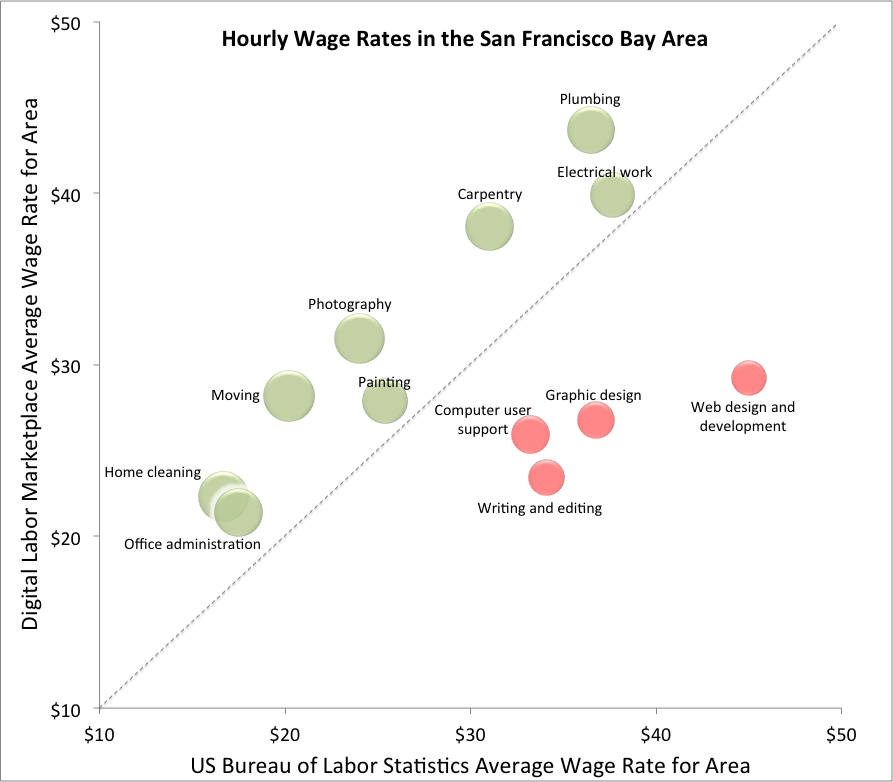 A number of factors explain why some individual on-demand workers get paid more than others, including experience levels, geography and whether the platform certifies you as being a superior provider or not. However, for an occupation as a whole, what seems to matter most is whether the worker needs to be present at the actual geographic location where the work is being requested. For example, you can be someone’s web designer or copy editor from anywhere; however, a plumber or carpenter generally needs to be physically collocated with the customer demanding the work.

This characteristic is closely related to the kinds of occupations that Princeton economist Alan Blinder called “highly non-offshoreable” in the mid 2000s. The more offshoreable an occupation in Blinder’s framework, the lower seems to be its relative online labour market wage today. The economic rationale is simple. If the presence of an online labour market increases the supply of labour without changing anything else, competition will drive down wage rates.

Furthermore, there seems to be little correlation between the on-demand wage premiums and how skilled the associated labour is. “Many people blithely assume that the critical labour-market distinction is, and will remain, between highly educated (or highly skilled) people and less-educated (or less-skilled) people,” noted Blinder about offshoring in 2006. “But this view may be mistaken.” A quick glance at our preliminary evidence today suggests that this observation will apply equally to the on-demand workforce.

So, what economic logic might drive up wage rates as the workforce goes on-demand? The first factor at play may be that on-demand platforms give customers a more visible window into labour quality levels. This stems primarily from the online feedback and reputation systems most of these marketplaces employ. When quality is more transparent, and the “gigs” are short term, risk-averse customers will on average be willing to pay more. Further, marketplaces that allow more capable or effective workers to easily distinguish themselves from the others attract better talent, avoiding the well-known problem of “adverse selection”. Additionally, the transparency created by feedback systems also motivates providers across the proficiency spectrum to do a better job. After all, if your online reputation suffers when you slack off, this will severely impair your ability to find work in the future.

A second reason has to do with ease of access. The demand for many of the popular occupations in today’s on-demand marketplaces is partly discretionary. When it becomes simpler to find a reliable home cleaner or high quality photographer, a greater fraction of human needs translate into actual demand for labour, because it is more feasible to find the provider you are looking for (try finding someone you can pay to stand in line for you in the US without an online labour marketplace). There’s also a better alignment between what you want and the service or provider you eventually find.

The long-term future of work

In the longer term, however, there are at least three other factors that will play a critical role in determining whether the on-demand transition leads to a better future for the workforce.

The first relates to the level of entrepreneurship on-demand platforms facilitate. One might think of many of today’s platforms as microenterprise incubators of sorts, nurturing the businesses of millions of small-scale entrepreneurs, from apparel makers to hospitality providers to taxi drivers. However, some platforms cultivate true entrepreneurship better than others. Some, like Uber, arrange financing for their providers. Others, like Airbnb and Etsy, provide mentoring akin to a franchisor, empowering providers to merchandize their products and services, set prices and manage customer relationships, much like a small business owner might. The greater the level of entrepreneurship, the more likely the platforms will become genuine gateways to innovation in the long run.

The second concerns the level of capital ownership, and whether this will spread more evenly across the workforce. In his 2014 book Capital in the 21st Century, economist Thomas Piketty makes a critical point: people who own portions of an economy’s productive capital have consistently enjoyed greater rates of income growth over the past two centuries than those who only provide labour. This observation frames what may be the most exciting promise of the on-demand economy: a reduction of economic inequality. If people once relegated to labouring for others as salaried workers are assuming new roles and occupying new positions – going from being people who receive wages to people who own capital – this will, in the long run, have a positive effect on a broad fraction of the economy.

The potential seems especially high if providers start to own not just their own microbusinesses but tiny slices of the platforms as well. Emerging financing models for cooperatives, like those pioneered by Fairshares and Swarm, may yield provider-owned on-demand platforms that mirror worker cooperatives. Additionally, platforms organized as traditional shareholder corporations may find that they benefit in the long run from exploring the viability of “provider stock ownership” schemes that are analogous to employee stock ownership plans.

The third factor that will influence the nature of on-demand work is whether social safety nets can keep up with the on-demand transition. Much of today’s on-demand work is in occupations that have traditionally been performed by freelance workers. However, over the coming decades, many jobs that are salaried and full-time will move into the on-demand world. Platforms like Universal Avenue, which provides an on-demand sales force, and HourlyNerd, which gives companies access to on-demand consultants with MBAs, are early examples. Another example is the iCEO system. Developed by the Institute for the Future, it is an artificial intelligence system that foreshadows a world in which the complex work we typically associate with senior managers will instead be done by software that parcels tasks to workers across a range of on-demand labour platforms.

As countries prepare for this on-demand future of work, it is crucial that their social safety nets – ranging from health and insurance benefits to paid vacations and stable incomes – are not lost in the transition. The challenge is especially acute in economies like the US and the UK, where access to such benefits is very frequently tied to full-time employment in a corporation or with the government. Future solutions may lie in systems akin to the Scandinavian model of flexicurity, or in the extension of approaches like the 401(k) private pension structure of the US, a model that highlights the promise of partnerships between individuals, markets and the government in funding our capital contributions to society.

As the on-demand model evolves and expands, these are questions we will have to consider. Without conscious and sustained attention, our social safety nets – important symbols of social progress and higher living standards – could slowly disappear over time, undermining the benefits brought about by this new model of work.

Have you read?
Why Americans face a future of uncertain work
How do we protect the rights of an on-demand digital workforce?
How has the sharing economy changed job security?

Author: Arun Sundararajan is a professor and the Robert L. and Dale Atkins Rosen Faculty Fellow at New York University’s Stern School of Business. His new book about crowd-based capitalism will be published by the MIT Press in spring 2016. Follow him on Twitter @digitalarun

Image: A worker sweeps trash off the floor as a trader stands outside the New York Stock Exchange in New York August 24, 2015. REUTERS/Lucas Jackson