Cities with the most expensive office space

Hong Kong has retained its position as the world’s most expensive city to rent high-rise office space, according to Knight Frank’s latest Skyscraper report.

The report highlights the average rent, in US$ per square foot, per year. The following chart shows the top 10 cities for prime rent prices. 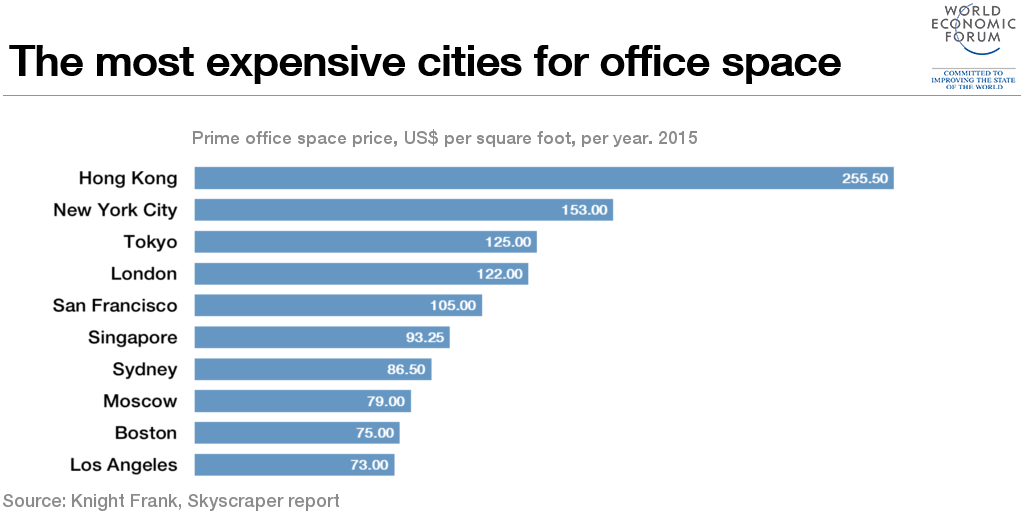 Following Hong Kong in second place is New York City, over $100 behind, with an average rent of $153 per square foot, per year. The top three is completed by Tokyo, with $125.

However, in the last six months London (in fourth place for overall price) has experienced the highest growth – nearly 11% between December 2014 and June 2015. There haven’t been so few vacancies in 14 years. San Francisco, in fifth, has also experienced high growth – in excess of 8%. The city is continuing to benefit from its expanding technology sector.

Have you read?
10 most expensive cities to rent property
Why is Angola’s capital the world’s priciest city?
Top 30 cities for real estate investment

More on Real Estate View all

The pandemic has signalled the importance of real-estate transparency in the urban environment, and it is increasing globally with room for improvement.

Why global cities will flourish in a post-COVID future

From offices built around the human experience to more home working, how will urban living, business districts and retail change in the wake of COVID-19?

One billion people fear losing their home, according to a new poll

This expert shares how to make sustainable buildings