Pension funds are expected to behave in a patient, countercyclical manner, making the most of low valuations over the business cycle to achieve high returns. Such behavior provides liquidity and stability to the financial system. However, this belief has come under question. A large theoretical literature has emerged which looks at how short-term considerations affecting these institutional investors might arise from relative performance concerns or from the influence of other incentives introduced by market and regulatory monitoring. Such considerations might incentivize fund managers to mimic others and herd toward common assets. Given the sizable wealth under management by these investors, such herding behavior can potentially have large effects on asset prices both in the short and long run.

In our recent paper, we quantify the extent to which financial regulations inadvertently add to financial market inefficiency. In particular, we look at trading behavior of Colombian pension fund managers in the presence of a peer-based underperformance penalty known as the Minimum Return Guarantee (MRG). This penalty resembles a reputational risk, in that the manager is disciplined for having significantly lower returns than her peers. With the MRG, the risk is explicit, since the manager will be penalized financially if returns are below the maximum-allowed shortfall relative to the peer benchmark. In June 2007, the Colombian government loosened the MRG formula, increasing the maximum-allowed shortfall. This policy change affected the propensity of pension fund managers to track the portfolios of their peers and is exogenous to market fundamentals. This natural experiment enables us to identify herding arising solely due to peer-benchmarking considerations.

The chart below highlights the differences in herding behavior between pension fund administrators before and after the change in the MRG in June 2007. The line depicts the correlation between a pension fund’s net purchases of a particular stock and the lagged overexposure of each fund to this stock relative to the holdings of the other pension funds. The correlation is calculated across all stocks and for all pension funds over a six-month rolling window. The negative correlation prior to June 2007 implies that the fund managers were more likely to trade in the direction of the peer portfolio, buying stocks to which they were underexposed relative to their peers. The move after June 2007 to a positive correlation implies that the incentive to trade in the direction of the peer portfolio reduced. In other words, the incentive to herd diminished following a loosening of the MRG. 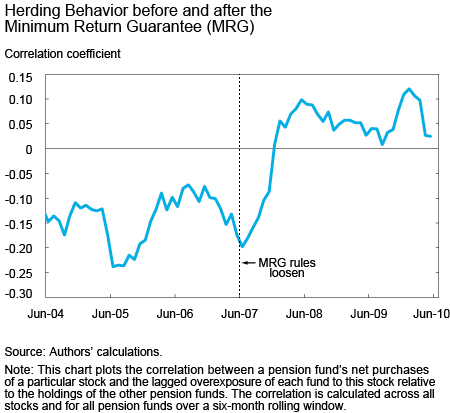 While there have been numerous attempts to identify and quantify the effects of herding behavior on asset prices, an empirical measure of herding has proven to be extremely difficult. Herding has usually been measured as trade clustering. However, since “decision clustering” may be prompted for reasons other than herding, it is hard to distinguish actual from spurious herding. Furthermore, the motive behind the desire to herd is also very important. For example, if institutions herd due to informational motives, such herding may promote price discovery, faster adjustment of fundamental information into securities, and more efficient markets. Conversely, if institutional investors systematically overlook their own private signals and trade with the crowd, prices might move away from fundamental values and display excess volatility.

The key distinction (and advantage) that our empirical strategy has over most of the existing literature is that we are able to directly identify demand due to peer-benchmarking considerations without relying on indirect inference to identify motives for correlated trading. By exploiting the change in the MRG, we are able to estimate the effects of herding due to peer benchmarking on asset prices. We find that demands from peer-benchmarking considerations have both statistically and economically significant effects on asset prices, generating 3.5 percent of contemporaneous abnormal returns on the average stock. These excess returns are fully reversed after six months. This finding indicates that herding among pension funds generates excess volatility in stock prices. We also find that when the funds are buying a stock to track the peer portfolio, the stock price starts moving more with the prices of other stocks in the peer portfolio. For the average stock, peer benchmarking increases the correlation of daily stock returns by 0.37 over a six-month period. The increase in co-movement is sizable, since the average stock return correlation over the sample period is 0.46. This shift is persistent over the next six months and cannot be explained by economic fundamentals. Overall, our findings suggest that peer effects and relative performance concerns among institutional traders reduce market efficiency.

This blog analysis underscores how certain financial regulation might have unintended consequences by altering the behavior of investors in a perverse fashion. The MRG is intended to protect the interests of pension-fund beneficiaries by limiting unnecessary risk-taking by fund managers. However, by relying on a benchmark based on peer returns, the regulation incentivizes herding. Consequently, asset prices can move in the short and medium run due to forces independent of fundamentals. Whether the welfare loss from this increased financial market inefficiency is clouded by the reduction in other forms of risk-taking is still an open question and requires further investigation.

The need to mainstream bitcoin and regulate cryptocurrency markets is likely to accelerate research into reducing the cost of storing renewable energy.

Here's how companies can make sure they are blockchain-ready