How Colombia is preparing for its next earthquake

Colombia is no stranger to earthquakes. In 1983, the 5.5 magnitude Popayàn earthquake killed around 380 people, injured a further 2,000 more and left another 10,000 homeless. Over a decade later, in the coffee-producing region near the city of Armenia, another earthquake struck. This time it was a 6.2 magnitude and it killed 2,000 people and caused $1.2 billion in damage.

Figure 1: Armenia after the 1999 earthquake 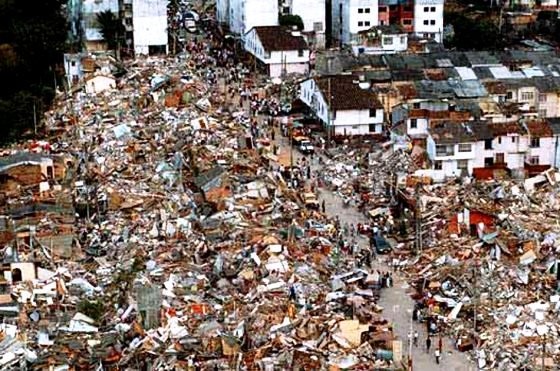 Colombia’s capital Bogotá was hit by smaller earthquakes in 1966 and again in 1967. At the time, the metropolitan area had around 1.5 million inhabitants. Today it has a population of just over 9 million.

The Colombian authorities, both at city and national levels, have for a long time recognized this threat, and have taken measures to mitigate its potential impact. Strong codes with mandatory lawful implementation is one policy. Colombia passed several codes for seismic-resistant building, first in 1984, then in 1998, and most recently in 2010.

Directives to improve existing construction with the aid of subsidies is another measure, as well as redevelopment initiatives and in some cases even free housing programmes.

These are major advances in comparison to other emerging economies. As a result, in the formal construction market, there is a good level of seismic safety in new buildings. But only two of every five new homes built in Colombia today are built through the formal market. The other three are built spontaneously, do not follow any legal procedures and have no formal design. Most of these homes do not comply with current structural and architectural regulations.

Because of this, up to 60 % of all urban plots in Colombia have an informal building on them. The chances are very high that this building would not withstand a large earthquake. Which means that millions of Colombians live in disaster-vulnerable housing, most of them in dense, urban, informally built areas. Some municipalities, such as Bogotá and Medellín, have allocated funds to subsidize structural upgrades in neighbourhoods identified as priorities. In Bogotá, over 1,400 families have already requested retrofitting subsidies.

But at the start of 2015, few retrofits had been completed, despite interest from both city governments and homeowners. Most of the subsidies have been allocated to cover easy-to-implement improvements, such as floor and kitchen finishes, and sanitation or roofing repairs. The current approach to evaluating and designing structural retrofitting has been expensive and difficult to implement, and the required paperwork and legal hurdles demotivate homeowners and even public officials. Meanwhile, more and more informal houses keep popping up.

At our organization, Build Change, we’ve developed a code-compliant retrofit evaluation and implementation procedure in partnership with Servicio Nacional de Aprendizaje (SENA), Swisscontact, and the seismic engineering community in Bogotá. Based on this, we developed two training modules – one for engineers and one for construction workers. This gave us a good starting point for generating local capacity to rapidly evaluate one- to three-story masonry houses, design the structural upgrade if needed, and implement the retrofit.

The procedure was authorized for use in all of Colombia in May 2015 and a pilot programme is under way in Bogotá in partnership with Caja de la Vivienda Popular and the Habitat Secretariat, in charge of field implementation and subsidy provision.

The programme promotes a large-scale risk-mitigation strategy to not only reduce existing risk, but to help formalize construction practice and enable safe future growth and densification. The general objective is to develop a way to evaluate and structurally strengthen homes, using public subsidies and private sector initiatives as incentives, initially in two major Colombian cities.

This model, once proven and streamlined, could be easily scaled and replicated in other similarly configured Colombian and Latin American cities, to make sure these dynamic and prosperous places are able to continue growing in a safe way.

The report, Building Resilience in Nepal Through Public-Private Partnerships is available here

Have you read?
How can we build peace in post-earthquake Nepal?
What’s next for Nepal’s economy?

Researchers are looking at ways to reinvent concrete to reduce its effects on climate change. One solution involves locking up CO2 in bendable concrete.

Some cars run on petrol. Some run on electricity. But they all run on silicon and a shortage of computer chips is causing problems.

What can the Texas electricity crisis tell us about the future of energy markets?