3 signs investors are getting serious on climate change

There is no doubt that if we are to keep global warming below 2°C, we will need to make significant transformations to the finance sector. This transformation needs to be both orderly and effective. Fortunately, it is well under way, and while it is mainly invisible to most people, the scale and significance of the changes already being made are huge and encouraging.

First, a reminder of the risks: left unchecked, climate change will be the ultimate risk multiplier, leaving no sector or country untouched. The human and ecological impact of this would be catastrophic; but so too would the economic impact. Companies would see significant loss of assets because of extreme weather, supply chains would be disrupted or broken, and the legal battles over liability could be bitter and costly. Mark Carney, Governor of the Bank of England and Chair of the Financial Stability Board, has warned that the current challenges of climate change are no measure for the future, and that “once climate change becomes a defining issue for financial stability, it may already be too late”. With a similar tone, some members of the insurance sector have already declared that a world that has hit the 2°C tipping point would be simply uninsurable. 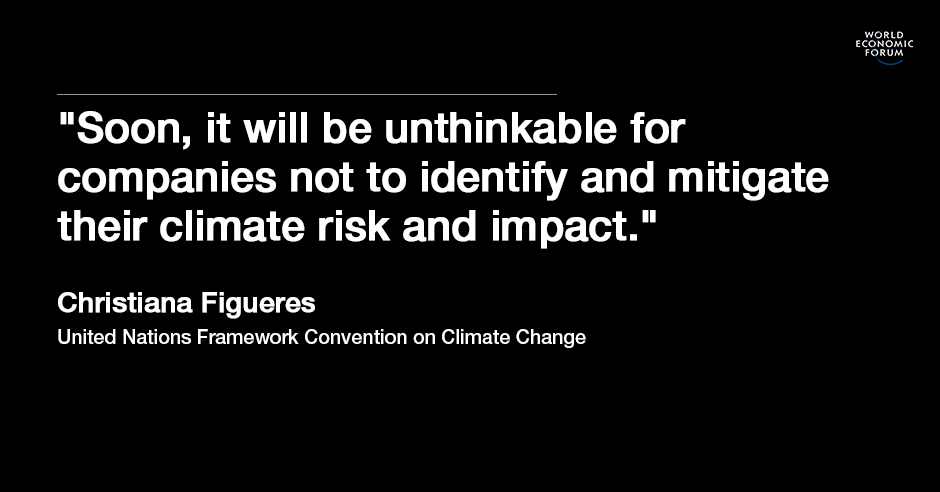 Many of these risks have been known for some years and a quiet revolution in response has been building. But now, at exactly the right moment, this has hit a turning point. I say this because of overwhelming evidence in three areas: disclosure, understanding of risk, and the realization of huge opportunites. Let me start with disclosure.

Thanks to the work of environmental organizations like CDP, GRI and SASB, corporations have become accustomed to investors asking them to measure and disclose how climate change will impact their businesses. But this year, a step change took place when the French Government announced it would be requiring institutional investors to disclose the climate exposure of their portfolios. Around the same time, the European Commission put together plans for mandatory disclosure of environmental and climate change information. As a result of their increasing concern, the G20 called on the advice of the Financial Stability Board, which is recommending that carbon disclosure be standardized and mainstreamed. The coming months will see this rise to prominence in a new way. Soon, it will be unthinkable for companies not to identify and mitigate their climate risk and impact.

Equally significant is the evidence that investors are understanding the risk and starting to actively manage it. Not long ago, most businesses regarded carbon risk as superfluous to their core operations. Now we see action on an impressive scale. This includes major investors taking serious steps towards decarbonizing their portfolios; asset owners engaging with company leadership to drive better management of climate issues; and a remarkable $2.6 trillion already shifting from brown to green technologies. Just this week, BlackRock, the world’s largest asset manager, added to this momentum by releasing a report that begins with the words “climate change and its risks are going mainstream”. The future has arrived.

Along with the realization of risks comes the recognition of the massive economic opportunity that climate action represents. This is the first intentionally directed industrial revolution and will be the source of good new jobs and strong growth for the coming decades, something developing countries are increasing realizing and taking the lead on. Developing countries are on track this year to invest more in non-hydro renewables than industrialized nations. We have also seen the green bonds market grow to over $40 billion last year, and total investment in renewable energy reached more than $300 billion – a more than six-fold increase in 10 years.

These numbers are still small by comparison to the wider economy, but the trend is telling. On a massive scale, investors are now using increasingly strong data to make rational decisions about capital reallocation from the economy of yesterday to that of tomorrow. While the path will no doubt be full of unexpected turns, it’s not hard to see where this is leading.

The three areas I have outlined tell a story of the world on the cusp of a transformation like nothing we have seen before. COP21 is a critical part of a mutually reinforcing cycle. The agreement that we will see in five weeks’ time will increase momentum and certainty that this trend is now irreversible. This in turn will shift capital even faster and the positive cycle of transformation will speed up. We still do not know what the future will look like, and we will have to innovate and create our way out of many problems. But we are capable of it, and more than ready for the task.

The next 10 years of financial transformation will make the last 10 look like we were standing still.

Image: Buildings in construction are seen among mist during a hazy day in Rizhao, Shandong province, China, October 18, 2015. REUTERS/Stringer

Using a benefit-risk analysis researchers have revealed that reducing coastal flooding through mangroves and coral reefs can be cost-effective.

5 things you should know about the UN Ocean Conference, a chance to save the planet’s largest ecosystem

5 unusual waste products that have been recycled into something new

The world's largest freshwater fish is discovered by villagers in Cambodia