How does climate change affect fertility?

Policymakers are tasked with addressing climate change in the face of uncertainty: the 2013 IPCC report projects average global temperatures will increase by anywhere from 5 to 10 degrees Fahrenheit (3 to 6 degrees Celsius) in the coming century if we continue on our path of greenhouse gas emissions.

The uncertainty is compounded by the fact that the consequences of any temperature change are unknown, including how something as basic as human fertility might be affected.

Understanding how climate change will affect fertility is an important economic concern. According to World Bank estimates, in the United States and many European countries, a woman has fewer than two children on average by the end of her reproductive life.

These “below-replacement” birth rates are already putting stress on programs that are funded by the working-age population, like Social Security. Any additional decline in births due to climate change could only make this worse.

Links between temperature and fertility

Second, temperature could negatively influence reproductive health factors such as sperm motility and menstruation. There are some pretty compelling experimental studies on mammals to support this possibility.

It is these two potential links that led us to hypothesize that global warming might be a threat to human reproduction, something that had yet to be thoroughly investigated by scientists and policymakers.

Our recent NBER study, “Maybe Next Month? Temperature Shocks, Climate Change, and Dynamic Adjustments in Birth Rates,” tests this hypothesis using data on temperature and birth rates from the United States from 1931 to 2010.

Up until recently, there was little consensus regarding temperature’s effect on fertility due to the dearth of experimental evidence. We cannot quantify climate’s role by simply comparing birth rates in “hot” and “cold” places – Louisiana is different from New York in more ways than just weather.

To isolate the effects of temperature, our study relies on a natural experiment: weather fluctuations from year to year in each US state are effectively random. We tested to see if births in Louisiana changed after an unusually hot August.

Our study also controls for many social and economic factors that are changing over time, including economic opportunities for women and access to birth control. While we don’t discount their importance, we were interested in quantifying temperature’s effect above and beyond these other factors.

We focus on the effects of “hot days,” which we define as days where the average daily temperature is above 80F (27C). Because we averaged the minimum and maximum temperature, the daytime temperature on these days is usually above 90F (32C), which most of us would find to be very hot.

The core finding is that hot days lead to a reduction in birth rates eight to 10 months later. The effect size is largest at nine months: on average, each hot day reduces birth rates nine months later by 0.4% or about 1,100 births. Importantly, the data also show that air conditioning played a major role in minimizing the impact that hot days pose for fertility.

Our study also explores whether the initial decline in birth rates is offset by an increase in the following months. The data show only a partial (32%) “rebound” in birth rates in the three months after the initial decline, possibly due to lingering health effects, work constraints or the natural decline in reproductive health with age. This suggests that these shocks could reduce the number of children a woman has over the course of her reproductive life – a growing concern for the United States and many countries. 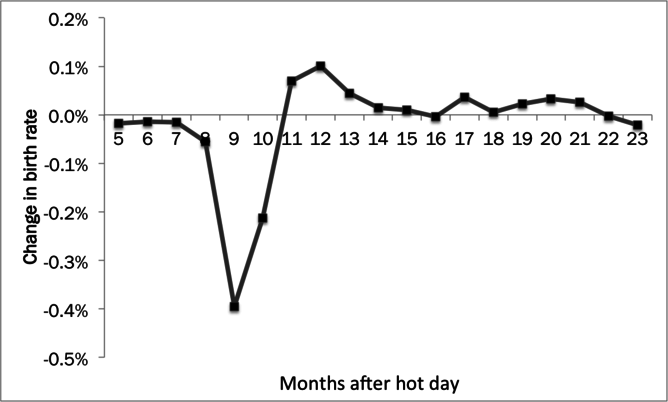 Figure illustrates the estimated change in monthly birth rates from each additional hot day. The decline in births occurs eight to 10 months after the hot day, and is then followed by a rebound in months 11 to 13.

As one limitation of our study, we tested for a rebound in births for only up to one year after the initial decline, so there could be some longer-term rebound for which we do not account.

While sexual behavior could certainly be influenced by hot weather, we present some novel evidence to suggest that reproductive health is especially vulnerable. If the story were just about temperature making sex uncomfortable, then we would only see a fall in births eight to nine months later. Instead, we find that birth rates also fall 10 months later, suggesting that hot days have lasting health effects. However, more research is needed to definitively verify this hypothesis.

We project that this warming will cause the number of births to fall by about 107,000 per year by then. There will also be more summer births, due to the rebound, which will expose pregnancies to considerably hotter days during the third trimester and will threaten infant health.

As a caveat, these projections focus exclusively on the fertility cost of heat stress and do not offer insight into the costs of natural disasters or other major social changes resulting from climate change.

While our study offers lessons from the United States, it is uncertain how global warming might impact fertility elsewhere in the world.

Unfortunately, this is one more area where the costs of climate change are uncertain.

Image: A woman holds her newborn baby in a nursery. REUTERS/Andreea Campeanu.

What’s the price of a green economy? An extra $3.5 trillion a year

The price of shifting to a green economy will be $3.5 trillion a year, according to a new study that breaks down the cost of a green global economy.

Snow in ancient Greece and the net-zero budget: Everything to know about the environment this week

Which country is currently producing the most nuclear power?

Breaking down 3 myths about green bonds

It's economic and social barriers, not technology, slowing the green transition