Who is the most influential business thinker?

Harvard Business School professor Michael Porter is the most influential management thinker in the world, according to the 2015 Thinkers50, a ranking published every other year.

The top 50 list and award ceremony, dubbed the “Oscars of management thinking”, was founded in 2001 by authors and management consultants Des Dearlove and Stuart Crainer to honour the world’s most influential business thinkers.

Described by Thinkers50 as “the father of modern business strategy”, Porter, an expert on strategy and competitiveness, is regarded as the leading authority in the field of management strategy. 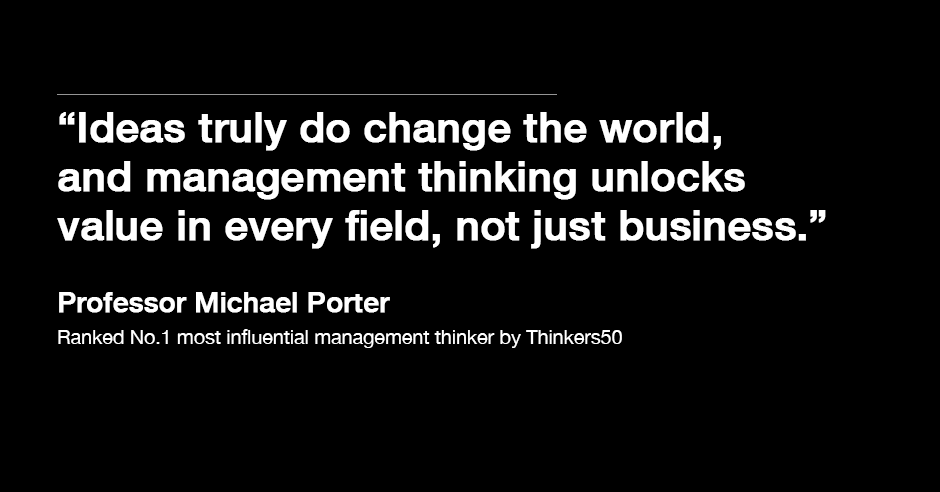 In second place on the 2015 list is bestselling author Clayton Christensen, who topped the ranking in 2011 and 2013. His 1997 book The Innovator’s Dilemma introduced the idea of disruptive innovation to a generation of managers.

Thinkers50 says Porter’s influence on business strategy has been “immense”, with his work taught in business schools around the world for the past two decades. His Five Forces model, which helps businesses determine how well they can compete in markets, was the definitive approach for decades.

Since the financial crisis, Porter’s Shared Value, a concept he devised with management consultant Mark Kramer, argues that companies can increase profits while tackling social problems. The theory has “led the way in a reevaluation of the role and expectations of capitalism”, according to Thinkers50.

Most recently, Porter has applied his ideas to show how smart, connected products are creating a technological revolution that will transform competition and have profound implications for society.

In addition to serving as the chair of the Institute for Strategy and Competitiveness at Harvard Business School, Porter has consulted for dozens of companies and national governments. Porter previously topped the list in 2007.

Speaking at the award ceremony, Porter said: “Management thinking and a new conception of how corporations relate to society is one of the most powerful tools we have in addressing society’s pressing challenges.

“Through creating Shared Value – which Mark Kramer and I have written about – I think we can create solutions to problems like healthcare, nutrition, the environment education, and housing. Ideas truly do change the world, and management thinking unlocks value in every field, not just business.”

For the 2015 ranking, more than 20,000 people named their favourite thinker at the Thinkers50 website and 1,200 people nominated thinkers for specific Distinguished Achievement Awards.

Have you read?
5 traits of emotionally intelligent leaders
3 things to know about tomorrow’s business leaders
How to be a big thinker

Is there a doctor in the boardroom? 6 health chiefs explain why employee wellbeing matters more than ever

Organizations are increasingly appointing an executive to their leadership to focus on employee wellbeing and make related investments. Here's how.

Automated hiring systems are ‘hiding’ candidates from recruiters – how can we stop this?

27 million "hidden workers" in the US are being filtered out of job applications by automated tech, a report by Harvard Business School and Accenture says.

Here's how to retain employees during the 'Great Resignation'

COVID-19 has changed the way US mothers think of work

Bridging the digital divide to create the jobs of the future