Which African country could become an automotive hub?

New data from PricewaterhouseCoopers (PwC) predicts that Nigeria can become a leading automotive hub in Africa by 2050 with an increase in local production and an expansion in new car markets.

Nigeria is very far away such ambitious targets today according to the report. PwC says this year Nigerians will import as many as 335,000 used cars, also known locally as ‘Tokunbos’, as well as 90,000 new cars. But just 30,000 cars will be assembled locally.

Put another way, in 2014, locally assembled cars accounted for only 15% of total car sales in Nigeria but that number could rise to 70% by 2050, according to the PwC report. In recent years, as former car assembly plants have fallen into disrepair, Nigerians have spent an increasing amount importing the majority of the vehicles on the road. 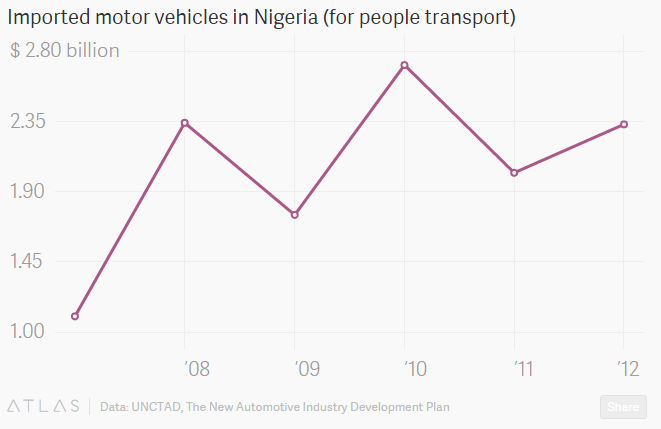 PwC’s forecast is based on optimistic economic projections for Nigeria over a 35-year period, which suggests rapid GDP growth in Nigeria will visibly impact the country’s automobile sector. In the short term Nigeria’s GDP growth is actually slowing down with IMF cutting forecasts to 4% from 6.4% due to lower oil prices.

But GDP growth was not the sole condition necessary for the automobile industry to boom. With 63% of Nigerians unable to afford a car without some form of financial support (pdf, pg 10), facilitating access to vehicle financing loans is also important. Last year, less than a third of all new cars sold in Nigeria, were sold to retail customers.

“One of the biggest barriers is lack of credit. Most of the economies do not sell cars through a cash basis but they buy through borrowing, this needs to be addressed in Nigeria,” Andrew Nevin, partner Africa strategy and operations at PwC Nigeria has said.

Similarly, the challenge with porous borders which allow car smuggling must be addressed to ensure that local production is protected. Tightening borders and regulating importation will help Nigeria conserve foreign exchange as its annual car imports value—half of which is believed to be smuggled– stands at $3.4 billion.

One of the key reasons for the progress in the growth of the local automotive industry is the National Automotive Industry Development Plan, an automotive policy announced two years ago.

The policy has already attracted interest and investment to Nigeria’s automobile industry as 30 car brands have obtained licenses to start assembly of cars in Nigeria but its implementation must remain enforced to allow for consistent growth. Back in August the government awarded licences for 12 new vehicle assembly plants. Names included Toyota, Honda, General Appliances West Africa and Nigeria-China Manufacturing Company.

Over the years, the market has been saturated by imported used cars (Tokunbos) which were popular among the middle class due to flexible pricing compared to imported new cars but the expected spike in local production suggests that the importation of used cars will be curtailed by 2034. Nigeria’s annual new car market currently stands at over 50,000 but with projected growth, it can rise to as much 7.6 million in 2050.

Author: Yomi Kazeem is a writer at Quartz Africa.

Image: A welder works on a car. REUTERS/Claudia Daut.