Which countries will be most affected by rising sea levels?

China will be most affected by rising sea levels caused by global warming, according to a new report from Climate Central. 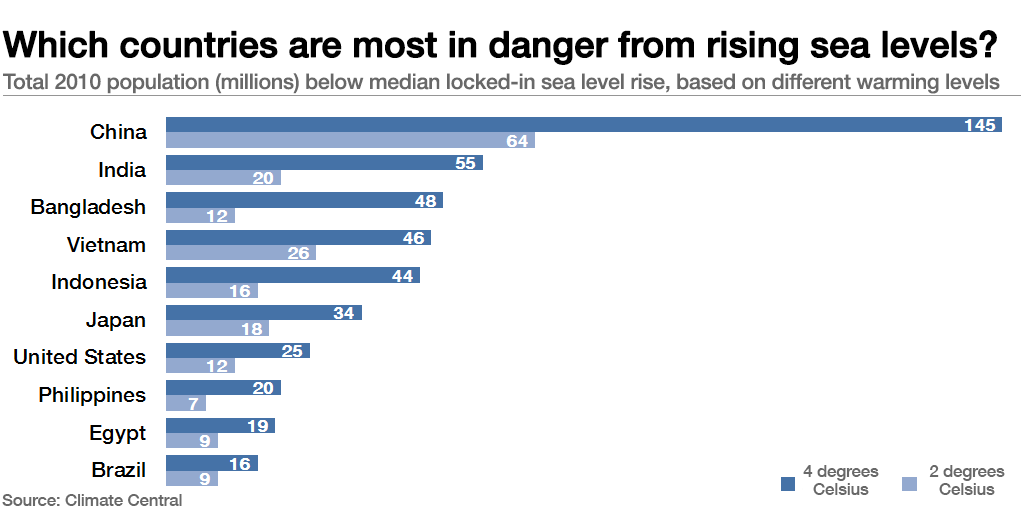 With a 2 degree rise in temperature, 64m people in China, based on the 2010 population, would be living in areas submerged by rising seas. However, with a 4 degree rise this jumps to 145m people. China is followed in second place by India, with 20m and 55m respectively. India’s neighbour, Bangladesh, completes the top three most at risk.

The list is dominated by Asian nations with Vietnam, Indonesia, Japan and the Philippines all appearing. The only other nations to feature are the US in 7th, Egypt in 9th and Brazil in 10th.

Private-public collaboration can harness tech innovations across the value chain for decarbonization. But we need frameworks and policies to support a sustainable recovery.

One more reason to act fast on climate: economics

If we take decisive climate action now, there is potential to gain $43 trillion in net present value to the global economy by 2070.

Davos 2022: We are in the middle of the first global energy crisis. Here’s how we can fix it

Natalie Marchant and Ross Chainey 23 May 2022

Action on clean hydrogen is needed to deliver net-zero by 2050. Here's how