It is a rare industry nowadays that is not at risk of being upended by digital technology. Amazon, having swept away bookshops, is now laying siege to the rest of the retail sector. In transportation, Uber is outrunning traditional taxi companies, while Airbnb is undermining the foundations of the hotel industry. Meanwhile, smartphones are transforming how we communicate and revolutionizing the way we discover and patronize businesses.

So it is no surprise that banking and financial-services companies are not safe from the immense transformations wrought by technological innovation. Indeed, for the last decade, digital startups have been penetrating areas traditionally dominated by the financial industry. But there is reason to believe that finance will prove resilient.

Today, money can be sent to the other side of a country – or the world – simply by tapping an app, without ever interacting with a traditional financial-services company. Migrants’ remittances alone, which the World Bank estimates will total $586 billion this year, represent a tremendous growth opportunity for companies competing with banks to move money. 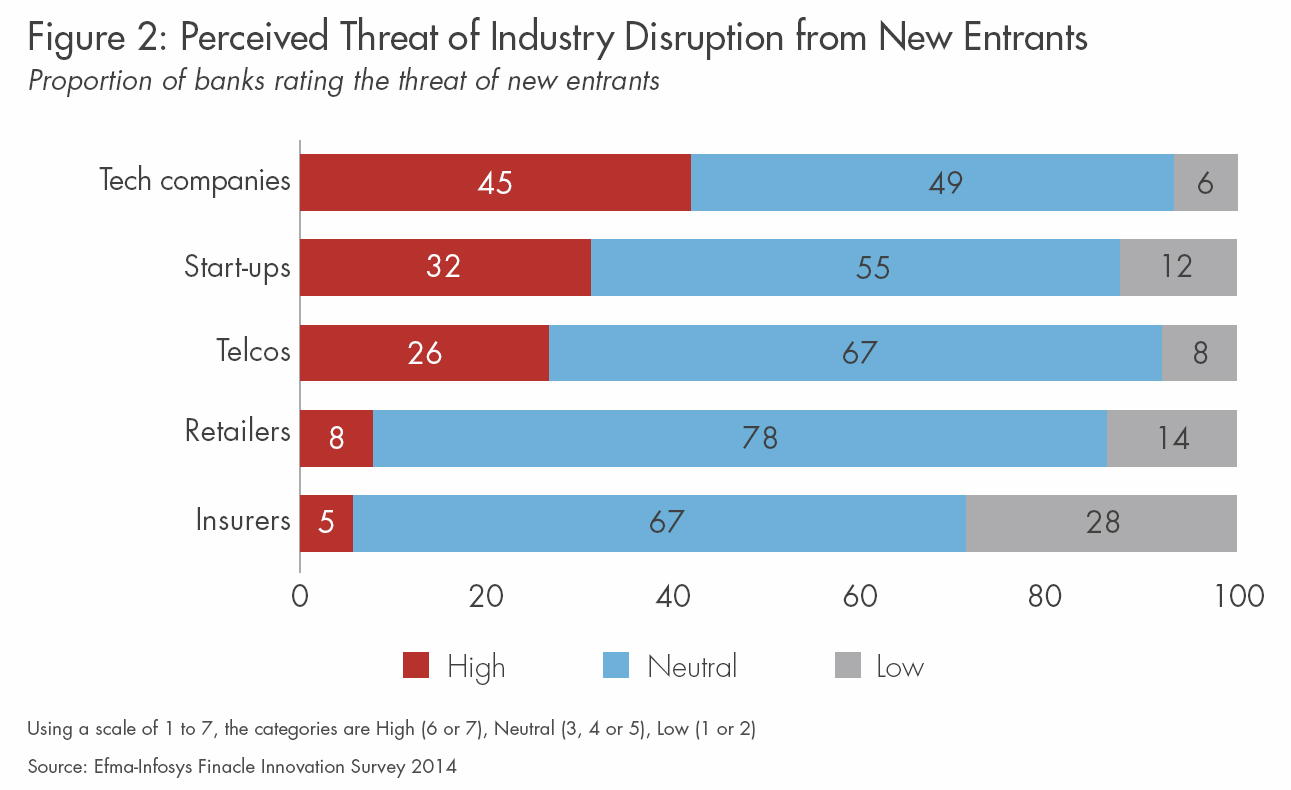 Meanwhile, would-be disrupters are offering opportunities to save and invest – the very heart of traditional banking institutions’ operations. Startups such as Acorns – an app that automatically allocates a proportion of everyday purchases to a pre-selected investment portfolio – are making rapid inroads into a very competitive marketplace.

Acorns, launched in 2014, already manages more than 650,000 investment accounts. The company – and others like it – are not just moving into the market; the simplified investment and savings processes they offer are expanding and transforming it. According to research by the digital ad agency Fractl, approximately 85% of millennials are saving a portion of their paycheck – a larger percentage than their predecessors.

Lending, too, is being transformed by technology. Crowdsourced funding and peer-to-peer lending schemes give borrowers the opportunity to circumvent many of the hurdles of traditional banking – including, in some cases, collateral requirements and credit ratings.

According to the research firm Massolution, the crowdfunding market has grown exponentially, from $880 million in 2010 to $16.2 billion in 2014. Global crowdfunding volumes are expected to double this year, surpassing $34 billion. In 2016, crowdfunding is expected to provide more funding than traditional venture capital.

Even financial services traditionally characterized by face-to-face dealings with clients, such as investment banking advisory services, have been affected. When Google conducted its initial public offering in 2004, it chose to bypass the investment banking industry, which traditionally underwrites the process of taking a company public. Instead, the company opted for an electronic auction in which anyone could participate. Other companies – like the financial research firm Morningstar – have followed suit. While these attempts to revolutionize the equity capital markets have yet to gain widespread traction, their very existence is evidence of the opportunities for disruption in this sector.

But it would be premature to conclude that traditional banking has yielded to new financial platforms. Many of the new entrants have benefited from advantages that would be difficult to maintain were they to scale up in size and importance.

Traditional banking is subject to intense oversight, and regulations have only become more onerous in recent years, as regulatory authorities reacted to the 2008 global financial crisis by tightening rules on leveraging ratios and know-your-customer requirements. Many upstarts in the sector have carved out a competitive advantage by avoiding thresholds beyond which they would face substantial regulatory scrutiny and requirements.

This places a significant constraint on the size and type of financial transactions these new companies can offer. By steering clear of services that might draw the scrutiny of financial authorities, digital startups face a natural limit to the size of their market. Indeed, this arrangement – albeit informal – can be viewed as the way regulators manage the systemic risk posed by new entrants.

As the digital revolution evolves, much of the financial terrain in which technology companies are making the deepest inroads will come into much sharper regulatory focus. This will favor the established players. As a result, the digital revolution’s assault on the traditional banking industry is by no means overwhelming. In finance, at least, technology firms should not be viewed simply as a threat, but as a source of productivity-boosting innovation.

Author: Dambisa Moyo, is an economist and author, she also sits on the board of directors of a global financial services company and a leading technology company.

Image: A woman uses her smarphone while waiting to cross the street. REUTERS/Lucas Jackson.

DeepMind has put almost every protein in the human body online, in 3D

This freely available database of the human proteome marks a new dawn for medicine and biology.

These 10 ideas in statistics have helped power the AI revolution

AI could help us discover new drugs inspired by nature