How much territory has ISIS lost in 2015?

Despite launching attacks around the world targeting civilians, ISIS has been losing ground in Iraq and Syria in 2015, according to an analysis by research firm IHS Conflict Monitor.

The terrorist group has lost 14% of the territory it held in January, including strategically important areas such as the Syrian border-crossing town of Tal Abyad, which was ISIS’s main access point to Turkey from its de-facto capital Raqqa. 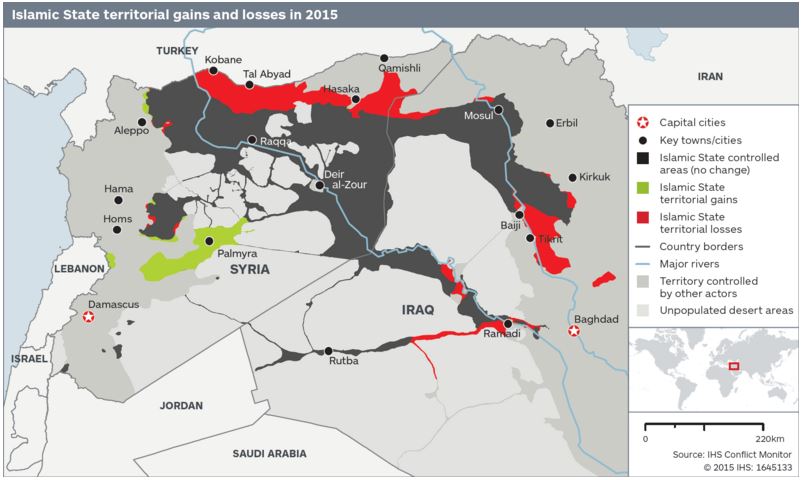 Airstrikes and ground offensives this year have forced ISIS to withdraw from large parts of Syria’s northern border with Turkey. Other significant losses include the Iraqi city of Tikrit, the Beiji refinery complex, and a section of the main highway between Raqqa and Mosul, which is slowing the movement of goods and fighters between the two largest ISIS-controlled cities.

The group did make some gains in 2015, including moving into new territory in western Syria (via Palmyra) and capturing Ramadi’s city centre. However, these advances came at the expense of losing northern Syria to the Kurds.

ISIS had to redeploy fighters from its northern frontline with the Kurds in order to launch the offensives in Palmyra and Ramadi. The remaining forces in Tal Abyad were so depleted that they had to be reinforced with the group’s religious police units from Raqqa, according to the IHS team.

Columb Strack, senior Middle East analyst at IHS, and lead analyst for the IHS Conflict Monitor, said: “This indicates that the Islamic State was overstretched, and also that holding Kurdish territory is considered to be of lesser importance than expelling the Syrian and Iraqi governments from traditionally Sunni lands.

“Geospatial analysis of our data shows that Islamic State activity outside areas it controls is heavily concentrated around Baghdad and Damascus, but much less so in Kurdish territory. The Kurds appear to be primarily an obstruction to the Islamic State, rather than an objective in themselves.” Syria’s Kurds are by far the biggest winners in 2015, expanding territory under their control by 186% to 15,800km2. They have established control over nearly all of Syria’s traditionally Kurdish areas, and make up the largest component of the Syrian Democratic Forces (SDF), which are being nurtured to form a key part of the ground campaign against ISIS in 2016.

The Syrian government has managed to reverse some of the territorial losses it suffered earlier in the year, due to Russian military intervention in September. But, according to IHS, the Syrian government controls an estimated 30,000km2, which means it made an overall net loss of 16% for 2015.

The IHS Conflict monitor report is based on open-source intelligence including social media and sources inside the countries.

Have you read?
Can ISIS bring Europe closer together?
What ISIS has done to the lives of women
3 ways to defeat ISIS

Image: An ISIS fighter stands guard at a checkpoint in the northern Iraq city of Mosul. REUTERS/Stringer

As NATO looks to expand, many may still wonder: how does it work?

NATO is the most successful political and defense alliance in the history of nation states,” said former Finnish Prime Minister. Here's how NATO works.

Why we need to regulate non-state use of arms

Why are food prices near an all-time high?