COVID-19: What you need to know about the coronavirus pandemic on 7 June

The persistence of the gender gap is shaping the debate over women in the workplace and underscores the challenge facing policymakers as they weigh on their potential role in closing it.1

The disparity affects females at all income levels, but women in professional and managerial occupations tend to experience greater gender pay differences than those in working-class jobs. The rise in the use of incentive pay, which has been linked to the growth of income inequality (Lemieux et al. 2009), might have contributed to the persistence of a gender wage gap in earnings (Albanesi and Olivetti 2009). This issue is particularly relevant for top executives, for whom incentive pay accounts for a considerable share of total compensation.

It has been well documented that there are significant gender differences in the level of compensation for top executives. Bertrand and Hallock (2001) show that three quarters of the 45% gender differential can be accounted for by the size and industry distribution of female executives, in particular, the fact that women are represented in smaller firms and that they are less likely to hold the title of CEO (or other top-ranked titles). The fact that female top executives are younger and have fewer years of tenure contributes to explain a large part of the remaining gender differential in total compensation. Additional studies by Bell (2005) and Elkinaway and Stater (2011) further confirm these results. By contrast Gayle et al. (2012) find that, controlling for executive rank and background, women earn higher compensation than men and are promoted more quickly, but experience more income uncertainty. They also find that the unconditional gender pay gap and job-rank differences are primarily attributable to female executives exiting the occupation at higher rates than men.

However, the prevalence of stock grants and stock options in the compensation of executives might introduce gender distortions not apparent in the levels of compensation or the career trajectories of men and women at the top.

Our study documents three new facts about gender differences in the structure of executive compensation. We focus on top-five executives as defined by title (Chair/CEOs, Vice Chairs, Presidents, CFOs and COOs) in Standard & Poor’s ExecuComp between 1992 and 2005.2 Only 3.2% of these executives are women.3

Figure 1 shows the average components, by gender, of TDC1, the most common flow measure of total compensation, which includes salary as well as an array of ‘incentive pay’ components that are linked to firm performance. 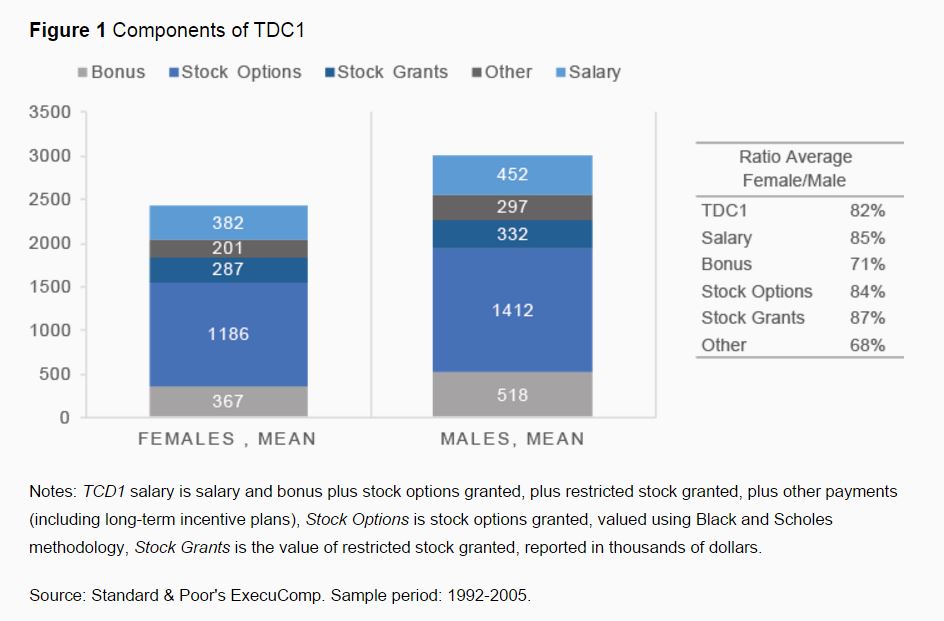 Consistent with earlier studies the gender differential in TDC1 can be accounted for by the fact that female top executives are younger, have fewer years of tenure and are less likely to hold the top job titles. However, gender differentials in the total value of an executive’s accumulated stock options and stock grants remain sizable (27 and 9 log points, respectively) even after taking all these factors into account.

Are these gender differences in compensation efficient?

Surveys of professionals and executives, time use studies and experimental and psychological studies suggest that:

Based on the efficient paradigm of the pay-setting process,4 these gender differences in barriers to career advancement and preferences are consistent with Facts 1 and 2, but they would imply lower performance for female-headed firms, for which we find no evidence in our data. Moreover, this framework cannot explain Fact 3.

The evidence we find on gender differences in pay and pay-performance sensitivity is instead consistent with the ‘skimming’ or ‘managerial power’ view of executive compensation. According to this theory, board members are captive to the executive, so managers can influence their compensation package to increase their average pay and undermine incentives. The goal of the executive is to prevent pay from going down when firm performance is suffering and trying to boost pay when the company is doing well. However, as we documented, top female executives are less entrenched than their male counterparts – they are usually younger, with fewer years of tenure and weaker networks. Thus, they are more limited than male executives in their ability to control their own compensation.

What do we learn from the analysis of executive compensation?

Our analysis suggests that performance pay schemes should be held to closer scrutiny. Increasing transparency about an executive’s compensation in absolute and relative to others in similar positions might mitigate gender pay inequality for top executives. A recent Securities and Exchange Commission ruling that says that companies have to disclose whether executive pay is in line with their financial performance seems to be a good step in this direction.

Our findings also raise a note of concern for the standing of professional women in the labour market, as incentive pay schemes become increasingly important outside the executive ranks. The failure of the efficient contracting paradigm to explain the gender differences in the structure of executive compensation points to the possibility of distortions in the link between pay and performance. To the extent that performance pay amplifies earnings differentials resulting from effective or perceived differences in attributes across workers, if designed incorrectly, it can exacerbate inequality and can severely distort the allocation of resources.

Elkinawy, S and M Stater (2011), “Gender differences in executive compensation: Variation with board gender composition and time”, Journal of Economics and Business 63.1: 23-45.

1 Policy initiatives such as the Paycheck Fairness Act in the US have been very controversial. This bill, first introduced in 2009, was meant to close some of the pay gap by “making wages more transparent,” “requiring that employers prove that wage discrepancies are tied to legitimate business qualifications and not gender,” and “prohibiting companies from taking retaliatory action against employees who raise concerns about gender-based wage discrimination”. The bill, however, failed to move through the US Senate in 2010. It was then reintroduced in 2011 and 2014 but failed to pass the Senate as of 2015.

2 Standard & Poor’s ExecuComp collects information on the compensation of executives in US firms belonging to the S&P 500, the S&P Midcap 400 and the S&P SmallCap 600.

4 The efficient paradigm for executive compensation predicts that the executive be paid a fixed salary, plus an incentive component which should be lower for executives who are less able to influence firm performance or are more risk averse or have a higher cost of effort. For these executives, their optimized effort will be lower, leading to lower average firm performance.

Some nations are recovering faster than others, but an efficient COVAX programme can ensure countries experience an even recovery, writes a finance expert.

G7 Finance Ministers have backed the creation of a global minimum corporate tax rate of at least 15%, which could form the basis of a worldwide deal.