Some say we are in a dark age of leadership. With so many challenges facing the world, now more than ever we need better leaders.

But what does “better” mean? Several of today’s leaders are visionary; many possess noble values and the ability to manage severe disruption. But there is one key quality that I would argue is too important to disregard, and missing in many of today’s most powerful people: meaningfulness.

The power of meaning

While reading an article about the top 10 traits of successful leaders, I began thinking of some of history’s most prominent leaders. Napoleon Bonaparte’s regard for social equality spurred him to design the famous Napoleonic Code of legal reforms. Abraham Lincoln’s mission to end slavery in the United States and reunite the country was a fundamental pillar of his leadership. Almost 100 years later, Martin Luther King continued Lincoln’s legacy, becoming the voice of the African-American people crying out for racial equality.

Viktor Frankl, the Austrian neurologist and psychiatrist who survived Auschwitz and authored the book Man’s Search for Meaning, simplifies the sources of meaning into just three elements: love, work and suffering. According to Frankl’s Auschwitz experience, those who had a strong sense of meaning in their lives were the most resilient.

Resilience is an essential quality for modern leadership because shocks and disruptions are a constant factor in today’s corporate and geopolitical context. Frankl wrote: “A man who becomes conscious of the responsibility he bears toward a human being who affectionately waits for him, or to an unfinished work, will never be able to throw away his life.” This sense of responsibility to something greater than oneself seems to be at odds with today’s leadership culture.

In many pockets of modern business and politics, the interests of the few take precedent over those of the many, and the rise in the globe’s wealth gap is a clear symptom. As Emily Esfahani Smith wrote in an article for the Atlantic: “leading a meaningful life corresponds with being a giver” rather than a taker. She continues: “Meaning … is enduring, it connects the past to the present to the future.” This, combined with a giving philosophy, can certainly be seen as an attribute of effective leadership.

A 2013 PricewaterhouseCoopers survey identified the top 10 leaders most admired by CEOs. Two years later, another survey of millennials by the World Economic Forum resulted in a similar list. In fact, both survey results had two top five leaders in common: Nelson Mandela and Mahatma Gandhi. 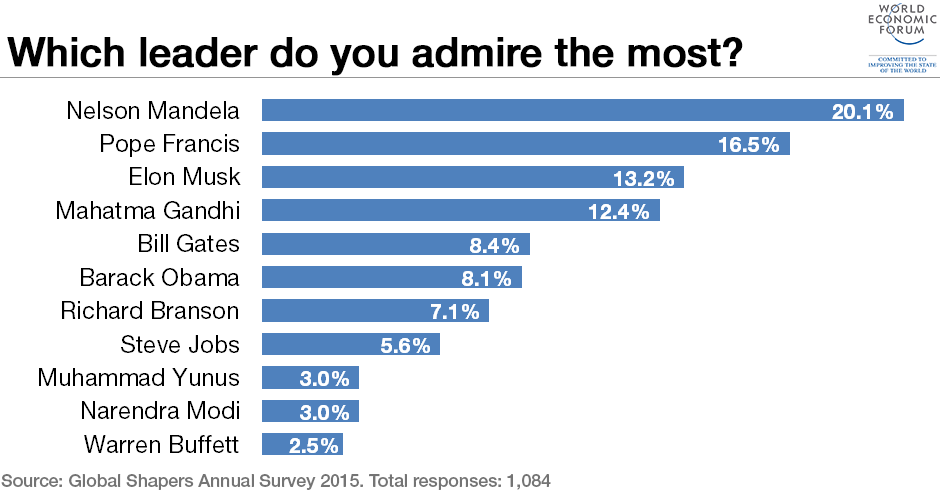 Here we have two seemingly different groups, the world’s business elite and the newest generation of income earners highlighting how important meaningfulness can be to leadership. We should be asking ourselves a simple question: how do today’s leaders compare?

How family can play a role in better leadership

Should leaders treat employees like family? This is an interesting question. A great leader looks to nurture a team through hardships and successes in order to maximize the development and growth of each team member. As such, it is not too different from parenting. As a relatively new parent of two, my own sense of meaning has changed: the well-being of my family now drives my sense of purpose. Translating this sense of selfless service into a professional context can be a powerful source of meaningfulness. I believe that individuals who apply a family philosophy could transform themselves from good leaders into great ones. This also requires understanding that people can be motivated by different things, and by acknowledging these motivations and addressing them individually, leaders are more likely to achieve better results.

Sharing is another facet of family life: it strengthens a sense of trust, support, commitment and community. According to the OECD’s Better Life index, we spend a considerable amount of our lives in the workplace, so it’s a good thing when leaders encourage a sense of shared success (and shared accountability) among the people they are responsible for.

A call to action

Meaningfulness in leadership takes into consideration the needs of everyone, not just the privileged few. It would be great if demanding this from our leaders became a global standard. “Future leaders will embrace missions that are visionary and describe what their companies will deliver to the world. And those missions will matter to a much larger group than just shareholders,” writes Lisa MacCallum on the World Economic Forum blog website.

The world is in need of more meaningfulness in its leadership, and it is our responsibility, as citizens and employees, to influence the decisions on who is appointed to lead us. It is we who are ultimately responsible for providing the world with better heads of state and business, people who are driven by motives greater and more important than themselves. We deserve and should demand better, because only with more meaningfulness in leadership can we collectively improve the state of the world.

Have you read?
Do happy people make better leaders?
5 ways the best leaders learn from failure
Which world leaders are top on Twitter?

Image: A businessman walks into a building at Tokyo’s business district in Japan, November 11, 2015. REUTERS/Toru Hanai

Why moral leadership matters now more than ever

New research shows that suggests moral leadership is in high demand by workers but in short supply. Dov Seidman explains why it's needed to drive impact during a crisis.

On this week's Meet the Leader Podcast, EY's CEO shares lessons on how programmes that tackle upskilling and neurodiversity contribute to society and the bottom line.

Leaders with a 'sustainable mindset' can help solve societal problems

Solving the right problems: Carlos Brito on this week's Meet the Leader Podcast