World leaders signed an agreement at the culmination of the Paris climate talks that commits nations to taking action on climate change. The deal, signed by 196 parties, agrees to keep average global temperatures “well below 2°C above pre-industrial levels”. The agreement also outlines a goal to limit this rise to 1.5°C.

The question remains, however, whether this is achievable. The following chart from Reuters suggests that without significant change, it is a long way off. 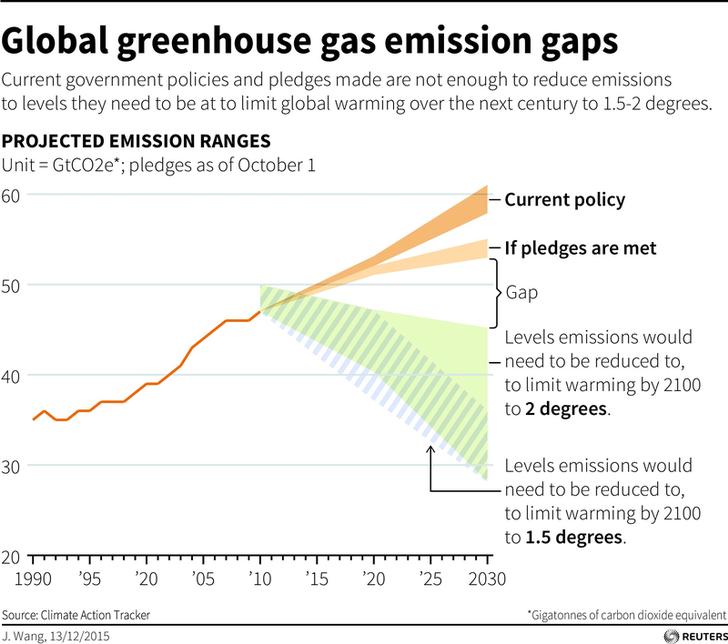 As the chart highlights, current pledges are not enough to reduce emissions to levels they need to be at to limit temperature rises to 2°C above pre-industrial levels. If we are to meet the Paris agreement’s more ambitious objective – to limit the rise to 1.5°C – the gap becomes even bigger.

In order to prevent significant global temperature increases, emissions would need to return to around 1990 levels. As the difference between current policy and pledges shows, this target is some way off.

However, with renewed pledges and commitment as a result of the Paris climate talks, hope is far from lost. Data published in the journal Nature, has even suggested that CO2 emissions could decline slightly this year.

Image: A chimney in an industrial area of Sydney. REUTERS/Tim Wimborne

Serbian Prime Minister Ana Brnabić told the Global Technology Governance Summit that a shift to e-government had already saved 180 million sheets of A4.

Three academics argue that governments, funders and scientists should focus on improving aquaculture on land, to align with the UN SDGs and reduce hunger.

Regrowing a tropical forest – is it better to plant trees or leave it to nature?

How industries can collaborate to put stakeholder capitalism into practice

Nature studies could soon be a compulsory school subject in the UK. Here’s why