Where are workers earning the most?

The USA may be famous for doing things bigger, but it can no longer claim to outdo the rest of the world when it comes to wages. As of 2014, the USA’s average pay packet has been overtaken by that of the small European nation of Luxembourg.

Research by the OECD has calculated the average wage among member nations, with 2014 the most recent data year. The research highlights significant differences within the organisation – over $45,000 separates those at the top and those at the bottom.

The following chart shows the top 10 nations with the highest average wage. Shown in US dollars, the data is adjusted for 2012 USD purchasing power parities. 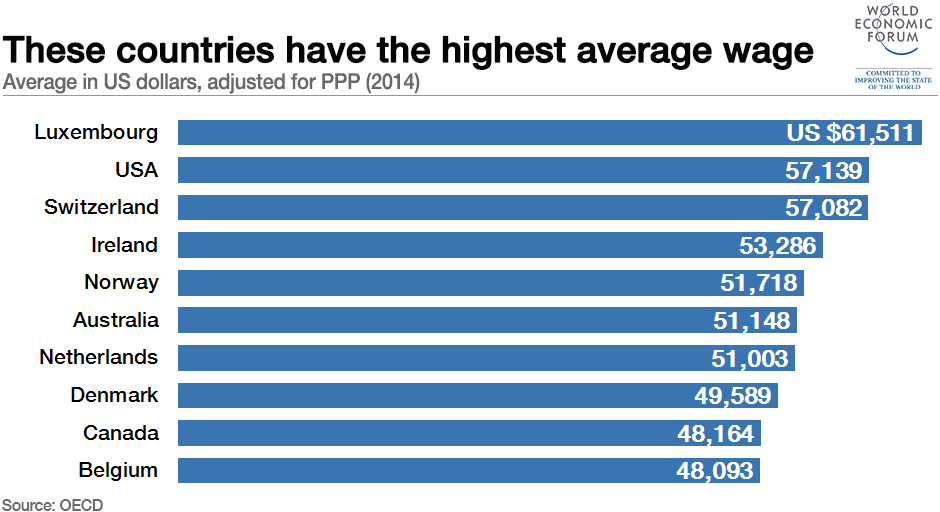 With an average wage of over $60,000, Luxembourg has surged ahead of the United States. The US takes second place, with an average of $57,139. Switzerland comes just behind in third place, also returning an average in excess of £57,000.

The top 10 is dominated by northern European nations from Norway and Ireland, to the Netherlands, Denmark and Belgium. Canada and Australia complete the chart.

Across the OECD there has been a slight rise in average wages from the previous year. However, several nations in the top 10 saw their average wage decline from 2013 to 2014. Australia, the Netherlands and Belgium all experienced slight declines.

Luxembourg’s place at the top of the chart is in part a result of a high minimum wage – in 2013 it was the highest in the OECD. Additional OECD data shows that teachers in Luxembourg are the highest rewarded in the world, while a strong finance and banking sector and significant foreign investment has brought capital into the country.

Have you read?
The Global Gender Gap Report 2015
Where do teachers earn the most?
Which European countries have the biggest gender pay gaps?

Image: A man using his mobile phone stands near a glass window at a building at a Tokyo’s business district, March 2015. REUTERS/Yuya Shino

What I learned at Davos 2022: a financial futures expert explains

The mood at Davos was the gloomiest since 2009. The war in Ukraine, surging inflation, tightening monetary policies, dismal markets, crypto unravelling, and a long economic hangover from ...