The announcement in October that China is terminating its one-child policy marks the end of a 37-year historical aberration that has accelerated the country’s demographic aging by decades. The social and economic consequences of the authorities’ drastic population controls, which reduced the average fertility rate in urban households from about three in 1970 to just over one by 1982, have been dramatic. The question now is whether, and to what extent, the country’s new two-child policy will mitigate those consequences. 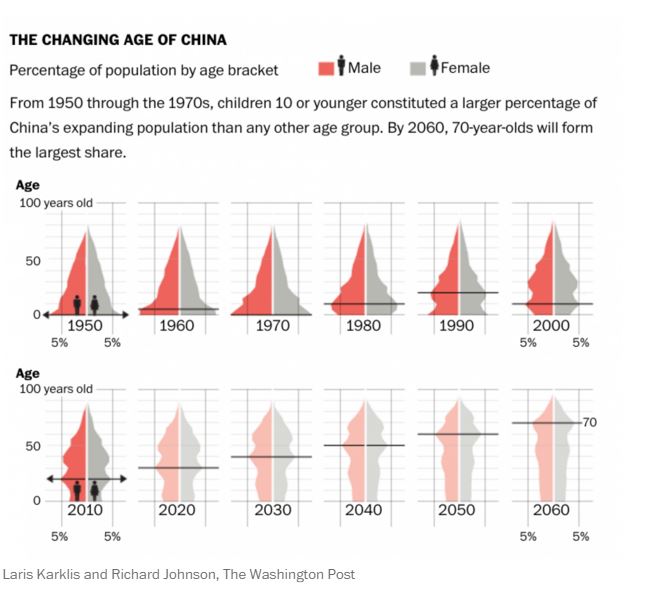 In fact, the impact of the two-child policy is likely to be just as far-reaching – and, overall, much more positive – than that of the one-child rule. This is especially true in the long term, but the effects will become apparent even in the relatively shorter term. One key reason for this is that an increase in the number of children per household will force a reduction in the aggregate savings rate, fulfilling a long-standing macroeconomic goal.

China’s current saving rate is so high that it is often blamed for fueling global imbalances and driving down interest rates worldwide. Moreover, it is a major obstacle in China’s ongoing transition from an export-led growth model to one based on domestic consumption and services. The two-child policy may prove indispensable in propelling this transition – a process that will begin sooner than most observers anticipate.

So far, economists have focused largely on the impending shifts in China’s demographic structure. Driven by the one-child policy, the share of China’s population under the age of 20 fell from 51% in 1970 to 27% by 2010, while the share of people aged 60 and up rose from 7% to 14%. As a result, the median age increased from about 20 to 35.

As retirees increasingly outnumber working-age people, the pressure on today’s younger generation will intensify. Indeed, in the coming years, each member of the post-1980s one-child generation will need to support two older people, on average.

Of course, when the two-child generation becomes middle-aged, its members will each have to support only one elderly person, on average, alleviating the economic pressure associated with such a high old-age dependency ratio. But that will take a few decades. In the meantime, the post-1980s one-child generation will be supporting not only the elderly, but also a higher number of young people.

Although this will undoubtedly be tough for the one-child generation, an unintended side effect will be a surge in consumption, as its members will have little choice but to spend a lot more. A comparison of families that had twins under the one-child policy and those that had just one child offers an indication of the scale of the change in consumption (though, of course, the inability of twins’ parents to spread out consumption spending over time means that it is not a perfect representation).

In terms of saving, urban households with two children saved 12.8% of their incomes, on average, in 2009, compared to 21.3% in families with an only child. The difference is large across all income groups.

The child-fueled boost in household consumption will undoubtedly affect some sectors more than others. At first, the surge in the number of children will boost the performance of stocks in children’s books, toys, and bicycles. As that generation ages, demand for housing, life insurance, and pharmaceuticals will increase substantially.

One of the biggest differences will be expenditure on education. According to the 2009 urban household survey, a one-child household in China spends an average of 10.6% of its total income on education, whereas a household with twins spends 17.3%. As the number of households with two children increases, this change alone could cause the aggregate saving rate in China to drop by as much as 7-10 percentage points, from 30% today to about 22% over the next ten years.

There is, however, a caveat. More children also mean less education investment per child, which could lead to lower human-capital attainment. Indeed, the average twin receives far less support after age 15 than the average only child, creating large differences in education outcomes. Twins are 40% more likely to go to a vocational high school than only children.

Nonetheless, China’s shift to a two-child policy is badly needed – and not just because it will achieve the intended long-term goal of balancing the country’s demographic structure. While there are certainly pitfalls, including a difficult transition period, the policy could prove to be a boon to China’s efforts to put its economy on a more stable long-term growth path.

Author: Keyu Jin, a professor of economics at the London School of Economics, is a World Economic Forum Young Global Leader and a member of the Richemont Group Advisory Board.

Image: Guan Junze (C) and his grandparents take their souvenir picture in front of the Tiananmen Gate in Beijing November 2, 2015. China must continue to enforce its one-child policy until new rules allowing all couples to have two children go into effect, the top family planning body said. REUTERS/Kim Kyung-Hoon.