Norway tops the table in the global energy race

Every country wants affordable, sustainable, and secure energy supplies; to live in a cleaner, greener planet where the lights also stay on.

But some countries are doing better than others at achieving it.

In the World Economic Forum’s The Global Energy Architecture Performance Index Report 2013, compiled in collaboration with Accenture, the winners and losers in the global energy race are starkly laid out.

Norway and Sweden top the table of 105 countries when their scores for economic growth and development, environmental sustainability, and energy access and security are added up. They score 0.75 and 0.71 respectively, where 1 is the highest and 0 the lowest.

Ethiopia and Tanzania prop up the bottom of the table, with scores of just 0.36 and 0.37 respectively.

It may come as no surprise to find that wealthier countries generally score more highly, with Europe dominating the leader board.

But China, whose economy has been growing at breakneck speed for the last decade, comes 74th in the table, largely as a result of its heavy reliance on greenhouse-gas-emitting coal-fired power stations. Its energy challenges were discussed at the WEF’s Tianjin meeting in September.

The Energy Architecture Performance Index (EAPI) is a global initiative aimed at creating a set of indicators highlighting the performance of various countries across each facet of their energy systems.

It is a way of measuring how well a country is doing in its necessary transition towards a new energy system that generates economic growth in an environmentally sustainable way, and that is accessible and secure for all.

Norway, blessed with abundant natural resources, is the second largest gas exporter and the seventh largest oil exporter in the world. While this boosts GDP, it also contributes to the country’s CO2 emissions, putting its “environmental stability” score on a par with the UK, Ireland and Romania.  But Norway also has a strong hydropower sector, supplying 90% of Norway’s domestic electricity supply, and boasts two of the world’s five large-scale carbon capture and sequestration projects. A five-year-old building code is helping to improve energy efficiency in buildings, while financial incentives encourage greater use of electric vehicles. But it is Norway’s very high “energy access and security” score which propels the country into first place in the table. 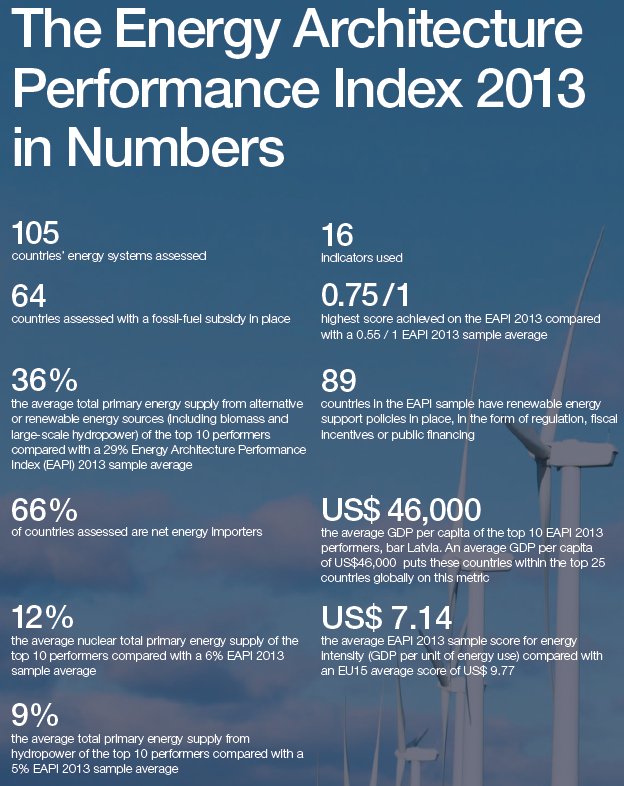