Switzerland is one of the world’s most successful economies, scoring highly in areas from innovation to institutional excellence. So why is our record less stellar when it comes to gender equality? Switzerland’s performance in the World Economic Forum’s Global Gender Gap 2014 Report is a case in point. We came first in the Forum’s Global Competitiveness Report, but only 11th in terms of closing the gender gap. A closer look reveals an even starker contrast between economic success and gender bias. In the wealthy canton of Zurich, for example, women earn on average 24% less than men. In the financial sector, one of Switzerland’s signature industries, the difference is an astonishing 32%. To make matters worse, Swiss women are more at risk of poverty than men.

Entrenched traditions are part of the problem. Perhaps surprisingly, women’s independence is still a relatively recent phenomenon in Switzerland. Until 1985, Swiss women could not open a bank account or go to work without their husbands’ permission. Many young women today saw their fathers having to sign off on their mothers’ career decisions. The consequences are still felt today: 75% of female teenagers in Switzerland choose their apprenticeships from a narrow range of only 11 stereotypically feminine occupations, such as hairdressing or as dental assistants. The same proportion of male teenagers choose from a range that is more than twice as wide. Popular “masculine” jobs, such as car mechanic or IT specialist, also offer more opportunities for career development. 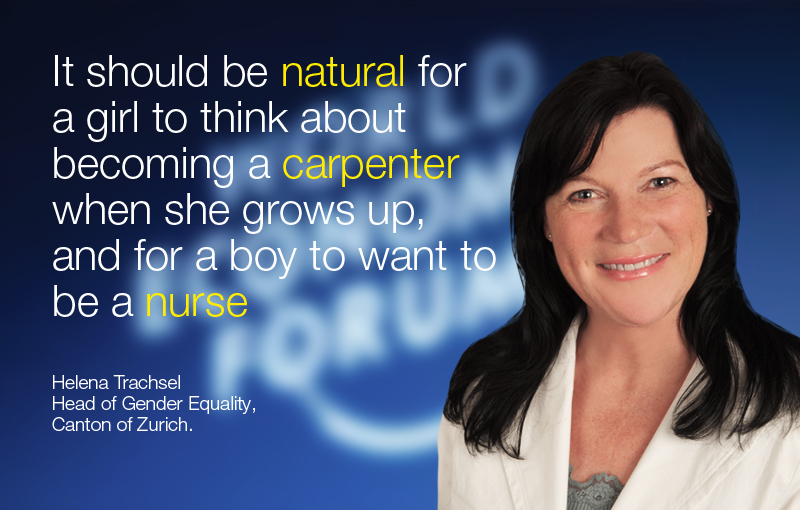 If we want Swiss society to truly embrace gender equality, we have to start at school. We need to teach both girls and boys to aim for ambitious careers, demand better pay and learn to negotiate. We need to encourage girls to picture themselves as future breadwinners. It should be natural for a girl to think about becoming a carpenter when she grows up, and for a boy to want to be a nurse.

For companies, there are six concrete ways of promoting gender equality at every stage of the hiring process and career progression:

1. Rethink job interviews. The question: “What do you think your salary should be?” should be abolished altogether, as women consistently ask for less than men. Instead, interviewers should provide a fair and transparent salary range and ask applicants to position themselves within it.

2. Make gender equality part of training and education. Young people should be supported in choosing jobs that are future-oriented and promising, regardless of their gender.

3. Be proactive about welcoming women. Companies should clearly state that they want to hire, support and promote women. Salaries and promotions should be monitored and evaluated on a regular basis to ensure equal treatment.

4. Make flexibility and work-life balance a part of the wider company culture. Too often, employees have to specifically ask to work part-time or work from home, which can be awkward. Companies should instead offer a broad range of different options.

5. Don’t limit your talent pool. Companies should aim for a 50-50 gender split in all their teams – right up to the executive floor. Offering practical support such as childcare, is part of this, as is the right attitude. It should not be a career killer for a man to ask for extended leave because he wants to look after his children.

6. Use the power of networking. Networking, mentoring and coaching opportunities can help women build confidence and develop their careers.

Young people today have a very different view of what a great career means. Many want equality in their private and professional lives, and see a healthy work-life balance as crucial to their happiness. This presents a huge opportunity for redefining gender roles. The challenge is to address this in all sectors – business, education, research and politics. When it comes to gender equality, we all have to work together. Only then can we provide the next generation with the very best support for shaping their own path in life and contributing to Switzerland’s continued success – regardless of gender.

Author: Helena Trachsel is the Head of the Office for the Equality of Men and Women of the Canton of Zurich

Image: Swiss Economy Minister Doris Leuthard is silhouetted against a Swiss national flag as she speaks during the party’s convention at the cable car station on the top of Saentis mountain (2,502 metres above sea-level) in eastern Switzerland, September 15, 2007. REUTERS/Miro Kuzmanovic

Helena Trachsel, Head, Office for the Equality of Men and Women of the Canton of Zurich

There is a unique window of opportunity to invest in Education 4.0: an approach to reimagining education in a way that is inclusive, focuses on a broad range of skills to prepare learners...

5 traits of the workforce of the future

These world-changing universities are making the most impact on society